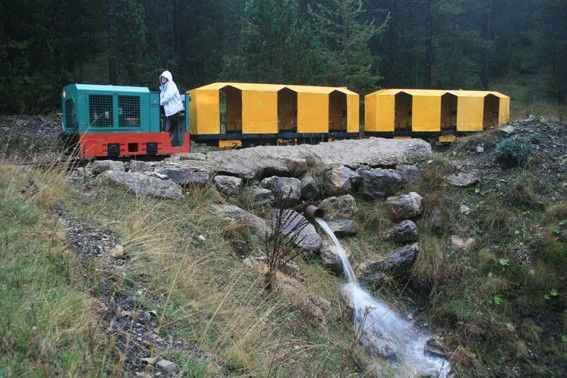 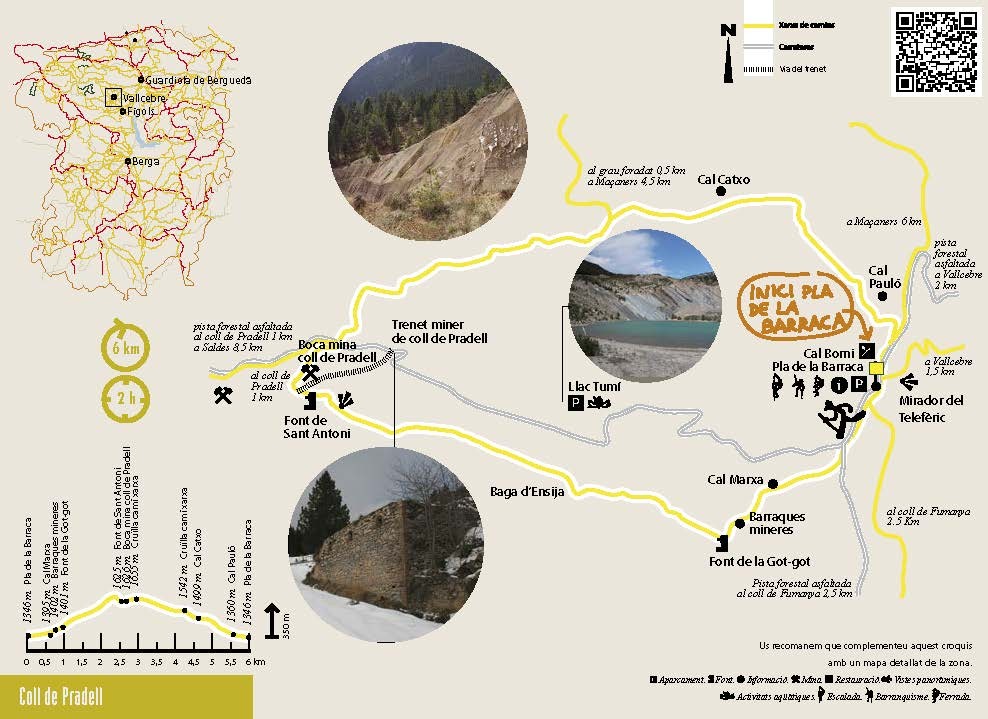 Shady and sunny, underground galleries and open-cast mines, altered landscape for mining operations and agricultural activity. This itinerary invites us to unveil its contrasts. The ascent to the gloomy forest of the shady Ensija, to the Pradell neckline, where the tracks of the small train of the mines arrive. The descent  crossing a large landslide caused by the old open-cast mines, where vegetation is hard for you to grow, but gives a contrasting color to the remodeled and eroded lands that, along with the spectacular panoramic views, surely do not leave us indifferent.

The route begins at Pla de la Barraca, at the junction of the road from Vallcebre to Saldes or Fígols. From this same site you can access the Vallcebre Active Area.

You have to take the road towards Fígols. After a few moments we will cross the stream of the Pradell hill and we will leave the road to take a track on the right that climbs through the middle of the pine forest. Soon we will arrive at the canteen of Cal Marxa, which remains to the right and is a sample of the many buildings that were built during the time of the splendor of mining in this area. We keep on going up the torrent to our left until we find some old mining shantytowns and the Got Got Spring. At this point you have to cross the stream and follow it on the left hand side (the stream is to the right). From here, the path will be parallel to the stream in the middle of a lush black pine forest, in the area of ​​the shady Ensija, also known by the Bagueta. The whirlwind of the water will accompany us all the ascent.

After about two and a half kilometers we reach a hill where the road begins to descend crossing a landslide and descend in a steep slope until it crosses the stream in the area of ​​the spring of Sant Antoni.

In this area we find the Mina Nova del Coll de Pradell. Here we can see the rails of an ancient mining train, partially recovered by the Association of Tourist Miners Trains and which from time to time offer outings. You can see the scheduled outputs here http://www.trensminersturistics.org/

We continue along the track that will take us to cross the road. Soon the track disappears to cross an ancient landslide and enter into a path in the middle of the forest. In this section we must pay attention to signs as the continuity of the path is not always obvious. Further on we will find a new landslide on clay soil, which makes it difficult to walk in times of rain and mud. When we return to the road, we will do it in a wooded area, with a transition between the creeping and the Scots pine. We pass through a network crossroads but we will always have to go down the path that will take us to Cal Catxo - we leave the house on the left - where we can enjoy spectacular views of Catllaràs, Serra d ' Ensija, the Graus de Vallcebre, the area of ​​the Artic, ...

Just in front of it, we will end up on a track that we will continue down below. From here junts after a curve, we will leave the track to the left, to follow a path  that passes through beams before used for cultivating and now for pastures. We will pass through Cal Pauló and return to the road that we will have to continue to the right to find the car park again and finish our itinerary.