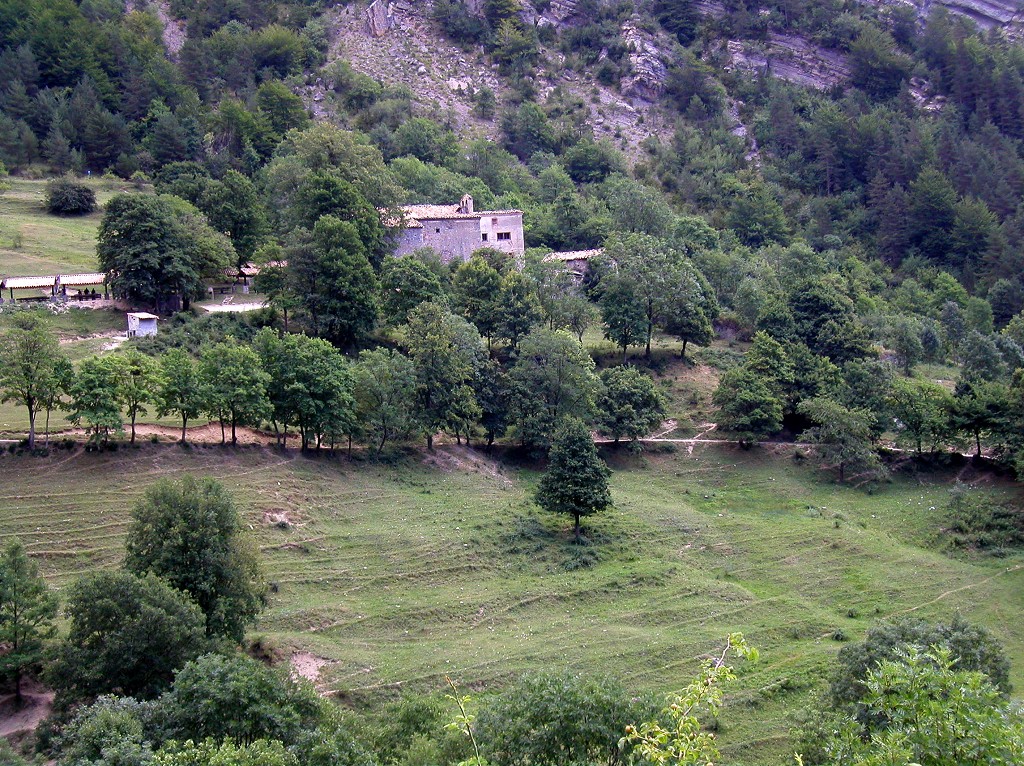 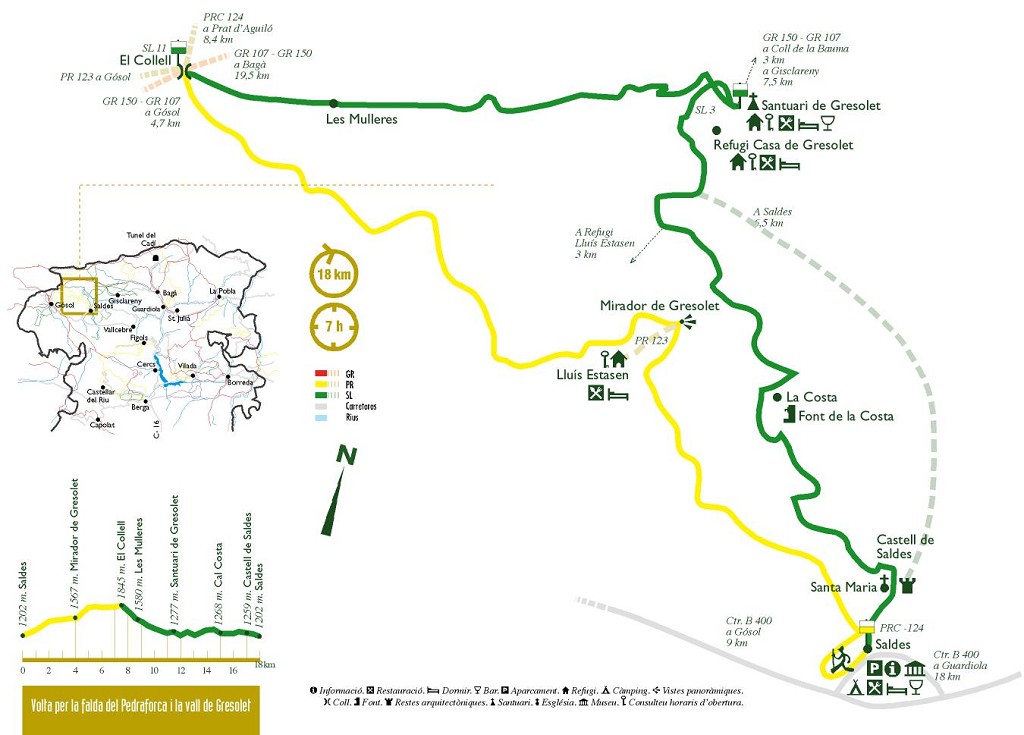 Saldes has two major attractions: El Pedraforca and Gresolet. This route gives several views of both. Even though there are long stretches of road and forest track, this is quite well compensated for with impressive views. The return is made along the Costa path, which is the old path that joined Gresolet and Saldes and is very beautiful.

As for all the routes in Saldes, we recommend you read the book Saldes, 15 rutes a peu mentioned in the bibliography section, which can be found at local tourist offices in the area.

After going past the last house in the village, the route goes into the woods. The green and white waymarks (SL) and the yellow and white (PR) coincide until a fork in the paths: the SL goes to the left and the PR keeps straight on. To avoid a strenuous climb up along a dirt track, we suggest you opt for the local path that goes left. After about 15 minutes you come to the tables and benches of the Serra picnic area beside the road. Go up along the road and after walking some 150 metres, just before a bend, you will see a track going down on the right with the yellow and white waymarks of the PR. Go down this track some hundred metres and you come to a signpost for Route 13 that points to an old path on the left: you are again on the PR you left at the fork, which you should now go back on. Along the path you may notice piles of stones and stone walls. These are old fields, silent witnesses of all the efforts and toil needed to extract a living from these lands.

Finally, the path comes out onto the road. Right beside the road you can see the Cabirols spring. After walking for about 15 minutes you reach the Gresolet belvedere. The views are truly marvellous. It's well worth spending some time here and you can also pick out all the points with the help of a map. You can also go up to the Lluís Estasen hut, which has a permanent caretaker: it takes about 15 minutes. Beside the hut there is also a fountain. To get back to the track again, there are several paths that emerge from behind the hut. We suggest you follow a path marked with orange points (Cavalls del Vent route circuit) that goes down on the left.

Once on the track, keep to the left. This track takes you to El Collell. Halfway along the path between the hut and El Collell there is a plentiful spring beside a stream. This track forms part of a classic 4 x 4 circuit that is usually quite popular in summer. Despite this, the views make up for any annoyance caused by the traffic. From time to time you will see clusters of deciduous trees between the pine and fir trees. You are at an altitude of 1,700 metres and it is not very usual to find them at such a height. The hours of sunshine and protection from the wind explain their presence.

Keep your eyes open once you reach El Collell because you have to leave the PR and follow the green and white waymarks (Route 13) that guide you to Gresolet. Once you are on this path, peacefulness reigns again. The path goes down alongside the Mulleres stream. This path was once twice as long as it is now but it disappeared when the old forest track was lengthened further up. The clearance of forest paths in favour of tracks leading to the woods for forestry exploitation has been carried out in many places.

This path takes you to the Gresolet sanctuary, one of the most emblematic places of the area. Higher up than the valley, it looks right on to the immense Gresolet woods, which include the largest fir woods in El Berguedà on the upper confines is the limestone crown that forms the northern side of El Pedraforca. This site has been documented since the 13th century. Nothing remains of the original Romanesque structure of the church, a consequence of the renovations periodically undertaken at the site.

You have to go back along the track until it links up with Route 3, which takes you to Saldes via the Costa path. From the track, go up the limestone crags that form the Moronta canyon lower down. Once at the back, the path becomes much flatter and goes around the attractive Arquedes and Gerdera gullies that furrow the northern face of El Pedraforca, then goes below the belvedere and approaches the limestone crag that closes off the vast valley you have crossed. The panoramic views afforded by the small belvederes found when crossing the ridges are quite impressive.

The path goes below the Forat del Llop cavern and on to the other side of the mountain: you are at La Feixatella. From here, the valleys are facing east. You will start to see long, high drystone walls that have adapted the large mountain slopes to make them suitable for cultivation.

On the descent, you pass by the Costa house, a typical mountain farmhouse with its surrounding outbuildings. The house has three floors: the stables on the ground floor; the kitchen, the oven, the living room and the bedrooms on the first floor, and the granary in the loft. Next to the house is the barn with the threshing yard in front. Apart from these elements, in one corner there is a small fountain that has recently been restored. This house shows the basic typology that became popular in the mountains from the 16th century.

You go along a path running higher up from the track leading to the house. Cross the large Scots pine woods of Grevoleda and you come to the Erola pass. Before reaching the pass, make sure you don't take the forest track, as this would take you off the route.

Once at the pass, you go into an oak grove and cross a maze of crop terraces between drystone walls. The terraces that delimit the fields are exceptional: tons of rocks that were put aside, generation after generation, to clear the cultivated land. You must pay attention in this section so as not to lose sight of the waymarks.

You eventually reach the Saldes castle, where consolidation works and a study have recently been carried out on the better preserved parts. The most spectacular feature is the tower base, with large loopholes and a room with pointed stone vault. It is placed between the 11th and 12th centuries, with reformations in the 14th or 15th. The castle church, dedicated to Saint Mary, is a small edifice with a single rectangular nave with an apse in the eastern part; you will soon notice that it has suffered much during its long history: the deformed apse and the off-centre belfry bear witness to the renovations arising from the upheavals of history.