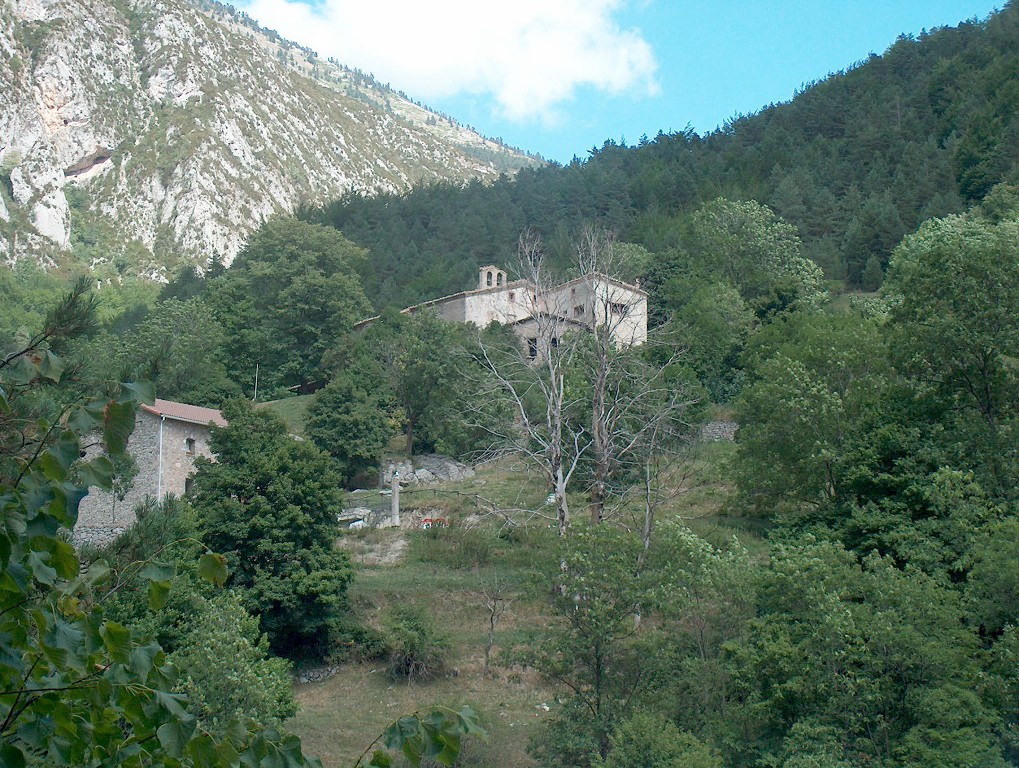 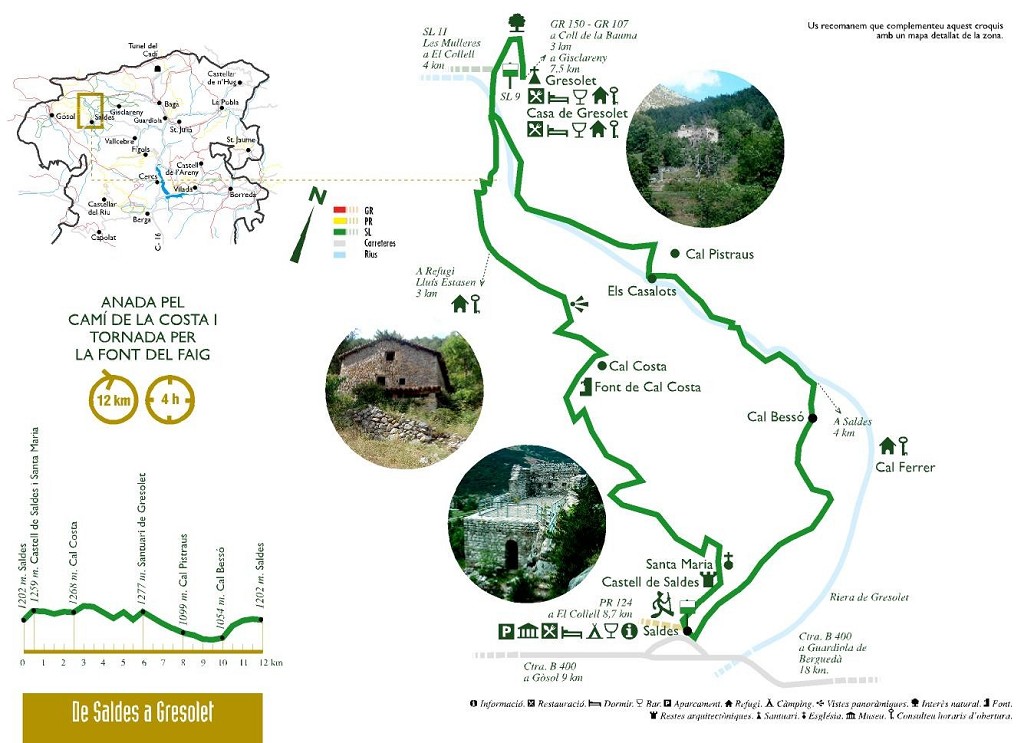 Saldes has two major attractions: El Pedraforca and Gresolet. This route gives you different views of the two. The outward journey is along the path of La Costa, the old path that once united Gresolet and Saldes, and is very beautiful. The return journey goes down along the Gresolet road to Cal Bessó.

The route starts at Plaça Pedraforca in Saldes. Go towards the church, go past it on the left and continue downhill until you come to the Canalassa path where you will see the board indicating the start.

If you follow the green and white waymarks you will come to the Saldes castle, where consolidation works and a study have recently been carried out on the better preserved parts. The most spectacular feature is the tower base, with large loopholes and a room with a pointed stone vault. Chronologically, it may be placed between the 11th and 12th centuries with renovations in the 19th or 15th. The castle church, dedicated to Saint Mary, is a small edifice with a single rectangular nave with an apse in the eastern part; you will soon notice that it has suffered much during its long history: the deformed apse and the off-centre belfry are testimonies of renovations arising from the upheavals of history.

When you leave the castle, go downhill to a small valley that was still cultivated until a few years ago. The terraces that delimit the fields are exceptional: tons of rocks that for generation after generation were put aside to clear the cultivated land. The path goes through a maze where you must take care not to lose sight of the waymarkers.

Keep going uphill until you come to the Costa house, a typical mountain farmhouse with its surrounding outbuildings. Three floors: the stables on the ground floor; the kitchen, the oven, the living room and the bedrooms on the first floor, and the granary in the loft. Next to the house is the barn with the threshing yard in front. Apart from these elements, in one corner there is a small fountain that has recently been restored. This house shows the basic typology that became popular in the mountains from the 16th century.

The path continues a little higher up from the house towards Gresolet. Have a look at the long, high dry stone walls that adapted the large mountain slopes to make them suitable for cultivation.

From the point called Forat del Llop, the path enters a very wild spot, passes under the Pedraforca belvedere and continues flanking the gullies that plough the northern side of El Pedraforca. The panoramic views afforded by the small belvederes found when crossing the ridges are quite impressive.

The path ends at the track that, on the left, takes you to the Gresolet sanctuary, one of the most emblematic places in the county; higher up than the valley, it looks right on to the immense Gresolet woods, which include the largest fir woods in El Berguedà, on the upper confines is the limestone crown that forms the northern side of El Pedraforca. Although this site has been documented since the 13th century, nothing remains of the original Romanesque structure of the church, a consequence of the renovations periodically undertaken at the site.

To return to Saldes, follow the track to the Cal Bessó crossroad (SL 9). Even though it is a track and is well trodden in summer, you will be accompanied by the waters from the Gresolet torrent. The torrent and the views suffice to compensate any annoyances coming from traffic. The path goes past several houses: Anorra, Cal Pistraus and Cal Camp d'en Jou on the left, and Casalot on the right. Have a look at the terraces on the slopes at the back of the houses: so much work and so little to show!

Before reaching Cal Ferrer, the route breaks on the right, initially along a re-opened track that covers the original path, until it goes past the Cal Bessó house that can be seen below. After going past the track, the verdure of the Cal Bessó stream and a strenuous climb take you back to Saldes.