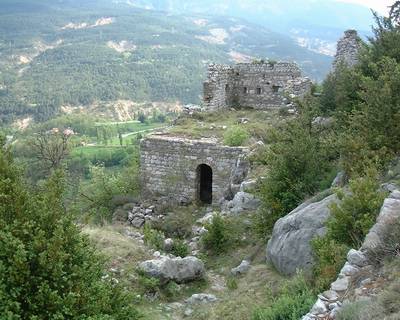 It is located at the foot of Pedraforca and nestled on a cliff. It was built in the eleventh century. Noteworthy are the fortified building and the castle church, dedicated to Santa Maria.

The Saldes castle, which has been documented since the 12th century, was the heritage of the Counts of Cerdanya and later became the residence of the Pinós barons.

From here you can enjoy an exceptional contemplation of the massif and the valley and the confines that the horizon cuts with the green blue of mountains that blend with the sky.

The hermitage of Santa Maria del Castell is a small church, which has been reported since the 13th century when it was the castle's church. It consists of a small nave finished off by an oval apse and covered with a pointed vault. The door is oriented towards Tramuntana, the result of the reforms made in the 17th century. Noteworthy is the south wall where you can still see the old front door. The bell tower of the tower is constituted with a square plant that was used as a defensive tower.

It still retains part of the outer walls, the church of Santa Maria and the courtyard. Also noteworthy is a large room of the thirteenth century, covered with pointed vault and semicircular arch door.

On March 25 the feast of Santa Maria del Castell is celebrated.