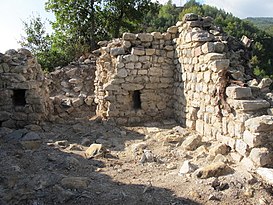 In the place of Collet d'Eina and on a hill above the current Guardiola tunnel are the remains of the old Guardiola Castle.

This castle, which dates from the 10th century, was vitally important in the Middle Ages, due to its strategic location, and was coveted by both the monastery of Sant Llorenç prop Bagà and the Barony of Pinós, the Counts-Kings of Catalonia and Aragon and the town of Berga. Today, however, it remains oblivious and its vestiges are already barely visible.

Under the castle, however, and just at the confluence of the Saldes and Llobregat rivers, we can see the old Guardiola Bridge. This bridge is probably as old as the castle itself, but its current structure dates from much later, Gothic in style and still remodeled in the 18th century.