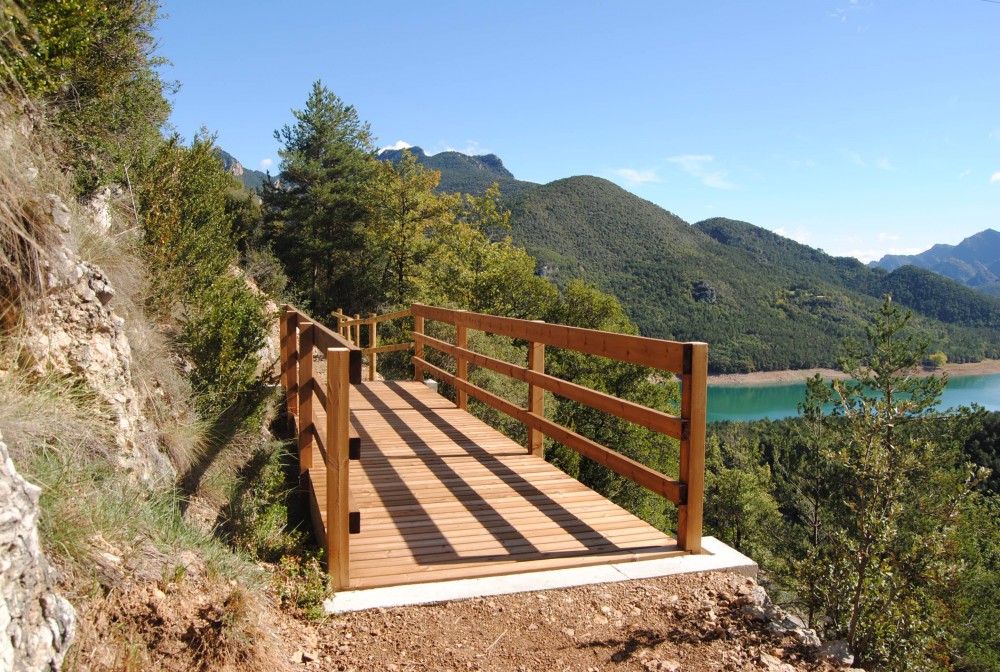 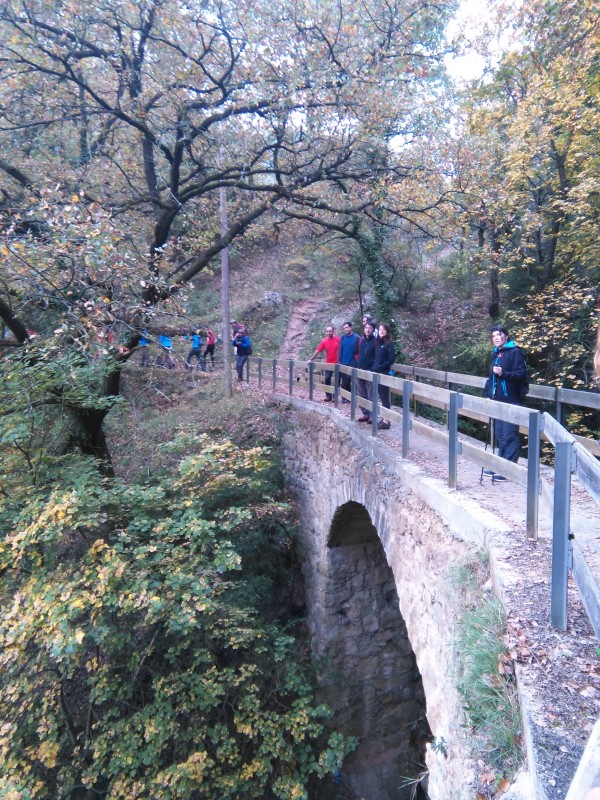 The recovery of the blood tram section allows for a pleasant walk between Sant Jordi de Cercs and Berga. The path goes into wooded areas, with tunnels and walkways of different types (including a 35-meter cable).

The proximity to the Baells reservoir offers very good views of this area.

A little history ...
The blood tram of the Fígols mines was the first mining train in Berguedà. It was built on the initiative of the owner of La Carbonera Española, Ramon Salvadó i Serra, a Calaf merchant. The train used to transport the coal from the Fígols mines to Berga, from where it was distributed through the Llobregat valley by the steam train. It began circulating around 1871 and the line was closed in 1904 with the arrival of the steam train to Guardiola, which assumed its functions. This primitive railway was 14.5 km long. It was an animal traction railway built in the image of 18th-century English mining trams. The track width was 840 mm. These features make it a valuable cultural display of the history of industrial engineering.
The coal was transported in wagons, but it also had a small passenger car. The convoys were moving on wooden rails equipped with an iron handrail. The platform was 2 meters wide. The route of the railway joined the Santa Magdalena pass to the outskirts of the town of Berga, where there was a simple station. From this point, you slowly descended towards Cercs, passing the Pla de Sant Jordi. From Cercs the train continued towards the Consolación mine, where there was another station.

The factory work consisted of dry stone wall walls and only the bridge heads were cement-bonded. The bridges were made of stone vaults or wooden levers. In all the route there were about twenty bridges and a unique tunnel (today disappeared), the tunnel of the Rooster, also called of the Ten meters, because that was its length. With no major tunnels or trenches or large viaducts, the route was markedly winding. The blood tram line follows the path marked by the level curves, so that all bridges are curvilinear in order to maintain the level. The slope was very low, 5 per thousand, exceptionally flat in a mountainous area.

Description
The route begins next to the Sant Jordi school in Cercs. You have to start by following the tarmac road to the west. You will immediately find a fork where you have to go straight - the one that goes down to the left will take you to the nucleus of Cercs. And a few meters later you have to leave it and continue on the track on the left, to continue on the right path, after a descent, which will take you to the first bridge of the Tramvia de Sang that crosses the stream of Peguera below the imposing remains of the pylons of the old Peguera Train that passed over and used to transport the coal that was extracted from that place.

The route follows the flat road on the left. On the right, the path that follows the Camí dels Plans or tren de Peguera. A hundred meters ahead, after leaving one of the roads that go down to Cercs, you will leave the train trace. At this point, there was a bridge that crossed the Garrigues stream and allowed the train to continue in plain; Unfortunately, this bridge could not be rebuilt at the moment and you have to climb down again. Continue then up the wide path leading to the orchards and shacks, which will take you to the Casanova de les Garrigues road. Once you have reached the road, you will have to follow it down for a kilometer to the left, the fair distance that will allow you to get back on the old platform of the train that you are following.

When you reach the height of the Cercs tunnel on the C-16 road, you will have to turn off the mouth going up a few steps to lower them again and resume the path. From here the views of the Baells reservoir will not leave you indifferent. Later on, you will have to make a small uphill and downhill climb - this time non-stop - to save a small section of the path that damaged the old road's slope. After a wooden walkway, the path will lower you to the same road, which you will continue for more than a kilometer south. You will come to the fork of the road that comes from C-16, do not be confused, keep straight on. When you reach the sidewalks of some farms on the road, you have to turn left, crossing the wooden door with passage for walkers. This path goes down some gentle ramps and a few steps until we find again the original layout of the train track just beyond the house of La Tosa.

From there, enter the best-kept part of this road, where you only have to leave the trace in two small sections to avoid two slopes on the C-16 road. In the first case, the slope is saved with a few steps up and down; in the second case, the step is only uphill, although the descent is steep enough.
In the sections where the original layout is maintained, you will only have to enjoy the great engineering works that this itinerary relies on: multiple bridges and dry stone retaining walls, ... some better preserved than others, some more visible and more hidden ones. On one of the last bridges you can see how in times where the architectural heritage was valued little, a hut was built using one of the stirrups on the bridge. You will pass near the village of the Golerons, where the old layout has also lost a bit to be restored immediately until you return to the old road to Cercs. Follow it a few meters to the left to the south and then you will be on the road to Vilada. If you look below it, there was the Cal Parraquer bridge on the royal road that crossed the Metge stream and allowed access to Berga, but it would require a restoration that does not arrive at the moment. So follow carefully along the sidewalk to Berga. When you cross the Medical creek, pay attention to the remains of what was the last bridge on this Blood Tram. You have arrived at Cal Curriu, the final station of this journey.