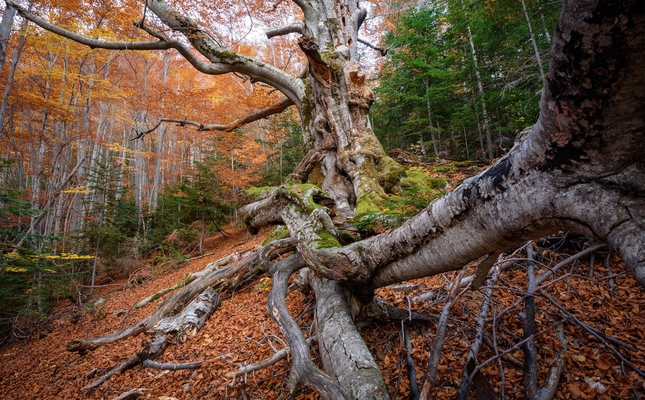 In a meadow on the left bank of the Saldes river, shortly after receiving the waters of the Gresolet river and the narrow stream of Llúria, under the Alzinet, the s. IX a small monastery. The 12th century consolidates the feudal lordship of the Sull house, which was on the mountain range on the right side of the river, in front of the monastery. The monks leave, and the church became the property of the parish of Maçaners. At the end of the 15th century, work is still underway, but after different litigation over the lands and the confiscation of Mendizábal in 1835 disappear the monastery. A house was built on the ruins of the Sull Church, which was abandoned in 1910.

With the archeological surveys and removal of the farmhouse ruins in 1971-78, the remains that can be seen today are exposed: a temple-roundabout, a cemetery, a courtyard and room constructions, such as a rectangular classroom. and a tower and remnants of small circular furnaces.
This route proposes to reach this very special natural area, where the waters of Gresolet and Saldes come together, and the monks found spiritual calm from the center of Saldes.

Description
The route starts at the Pedraforca de Saldes square. You must go in the direction of the church and continue until you leave the village along the path of Coll de la Bena, in the direction of Sant Sebastià del Sull. You will pass a path that will immediately put you on a forest track. Follow it north to Coll de la Creueta. There you will find a crossroads, follow the path also heading north, which goes through the forest towards Gisclareny and Maçaners. The return will make it to the left towards Gresolet.

The path will lower you quickly on the Gresolet track. Cross the track and go straight to Cal Ferrer, cross the river by the bridge under the house, you can also see the remains of the old mill. Continue on the track on the right and after crossing the irrigation channel you will find a new crossroads. Follow now towards Sant Sebastià del Sull. A flat path over the river will take you to Sant Sebastià del Sull.

Once you've flown your imagination thinking of the monks who had lived in this place, and had taken a calm breath, they might as well have left the path to Gresolet. Now not to return on the same path, walk half a kilometer upstream where you will find the turning on the left towards Cal Bessó. You will now go up the path of the beech spring. Initially, it is a track that bears the original path, past the house of cal Bessó below. Once you have recovered the old path, the greenery of the Cal Bessó stream, the crossing over the Someretes pass and the beech spring will lighten the ascent, which gradually increases until you reach the Coll de la Creueta again.

Once in the pass, you have to return along the same path where you came from, if you remember, you only have one last turn to Cal Toniquet, and then you will arrive flat in Saldes. Before the first houses in the town, you will find the path on the right that will return you to the church square and the Pedraforca square where you have started the route.