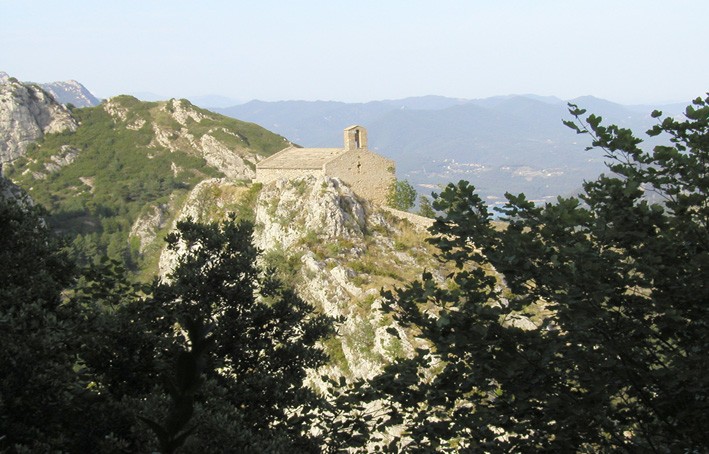 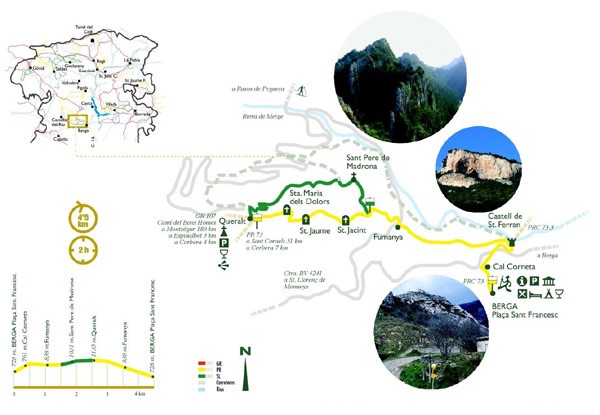 This route will give us to Queralt through Sant Pere de Madrona church that served the parish until the 19th century.

Just before you reach the Sant Llorenç road below, beside a pipe carrying what remains of the torrent after the drinking water is collected, you will see a structure that looks like a reinforcement of the wall of the road.

This is the remains of the aqueduct that carried water to the former Alon mill in front, which no longer exists as such and has been replaced by a house.

When you reach the road that leads to Sant Llorenç de Morunys, cross it and follow the paved path uphill. Very soon, you will have to turn off this path and continue along a track that goes to the left toward the Fumanya development. Cross through the development until you reach the road that leads to Queralt and Rasos de Peguera. After a few zigzags, turn off the shortcut onto a path with green and white markings on the right-hand side. This path leads through a small valley and leads to the pass located just below Sant Pere de Madrona. It's worth the climb to take the stairs that lead to the church.

Sant Pere de Madrona is a small Romanesque church that served the parish until the 19th century. From here you can enjoy a great panoramic view. At the pass below the church, you will find the same green and white markings that will lead you along the shady side to Queralt through a forest of pine and beech trees. When you go down the other side, you will notice that the vegetation has changed radically. Here the forest is made up of holm oaks and box-trees.

To return to Berga, follow the yellow and white waymarks of the PR C-73 until the end of the itinerary, in Sant Francesc square. It's well worth making the descent at your leisure to enjoy the panoramic views. There are some interesting views of L'Estret and of Hostal del Guiu, especially at the last ridge past the housing estate.