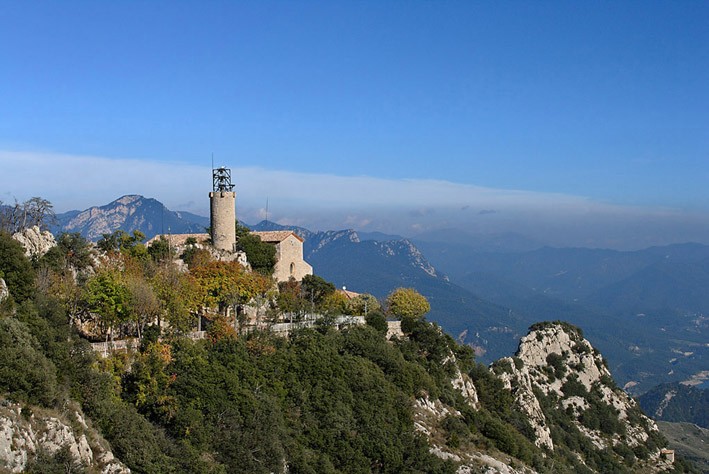 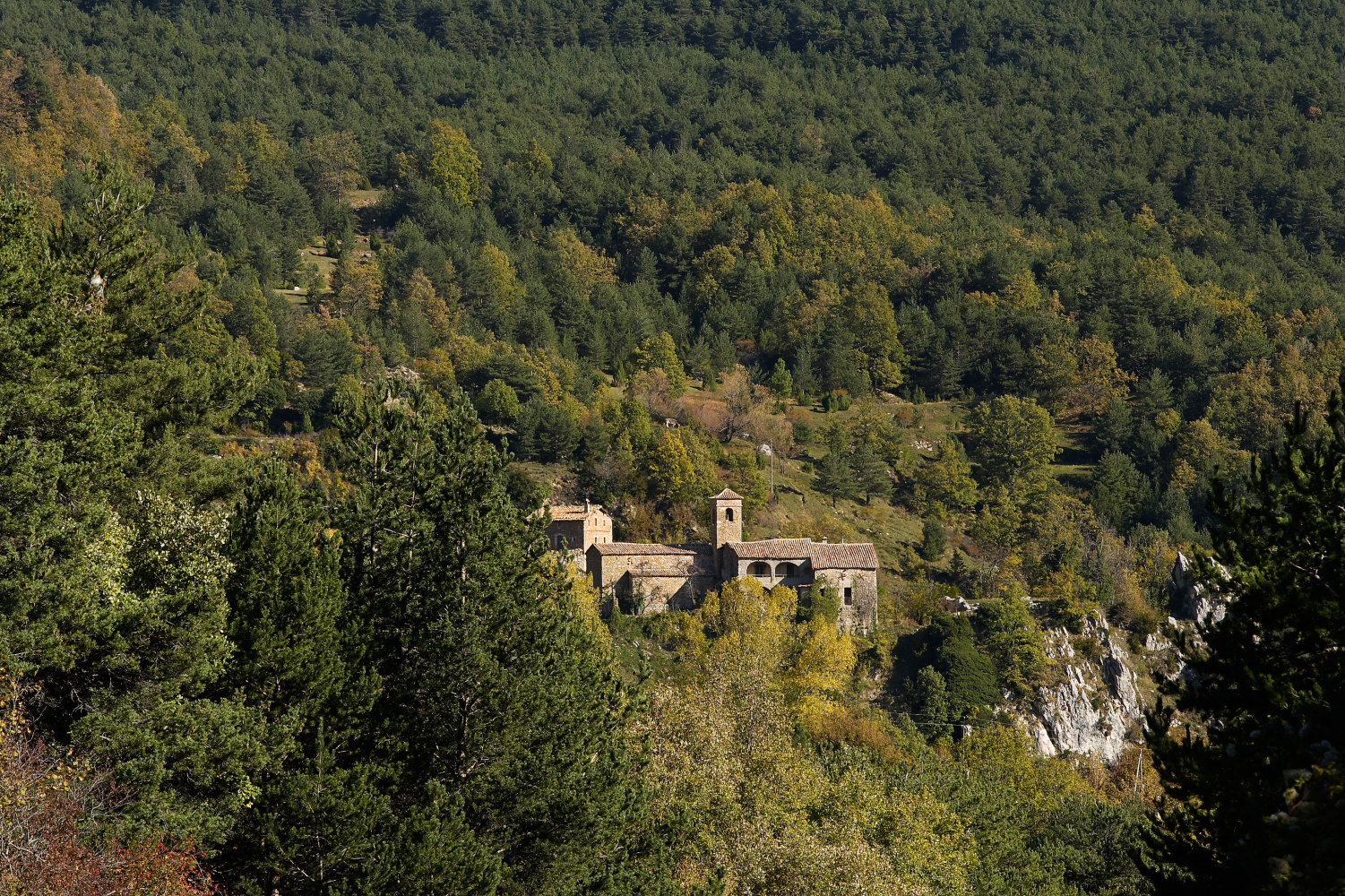 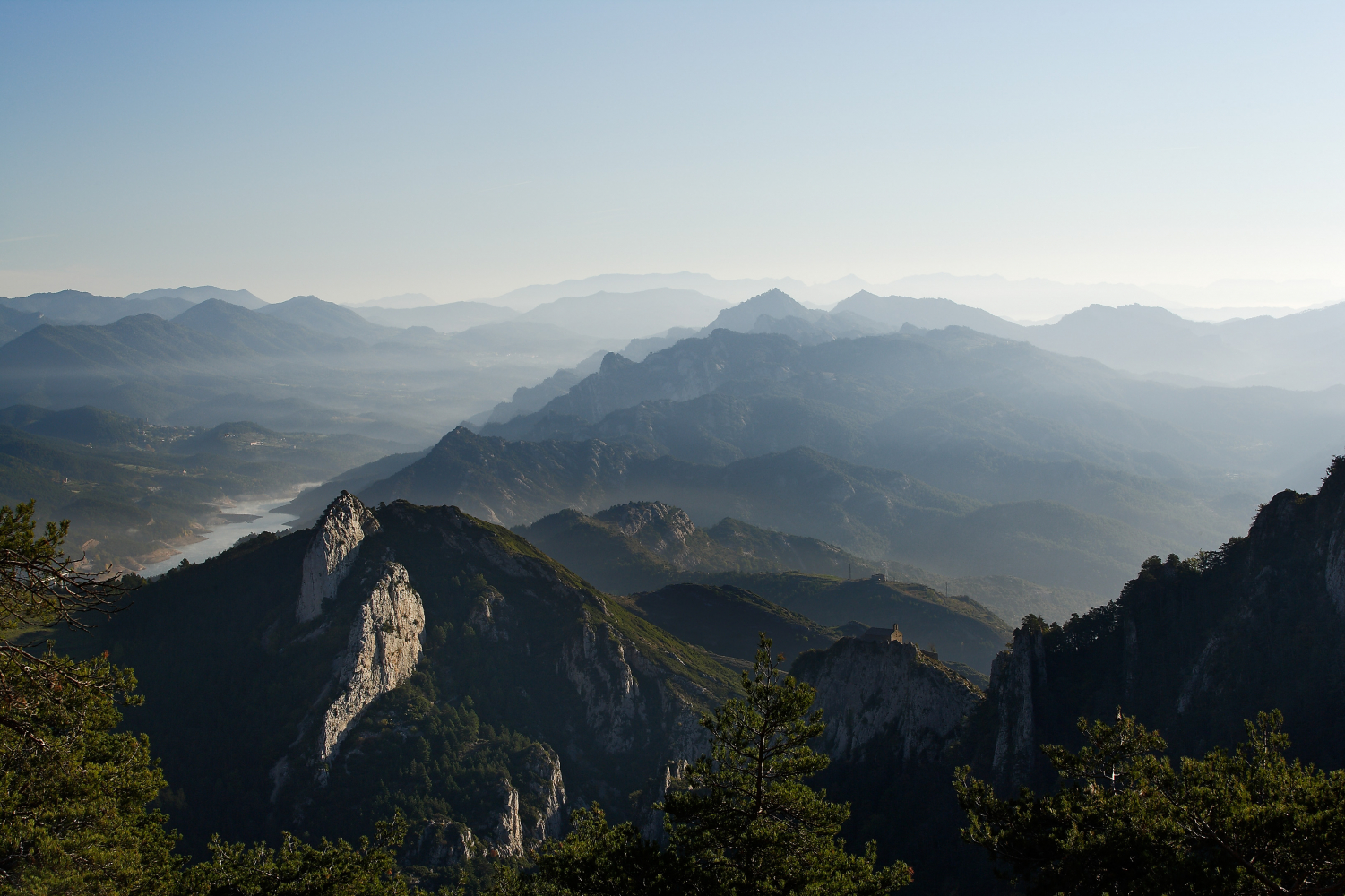 The area around Queralt has some stunning walks to offer, as well as a varied flora and fauna. It is relatively easy to see black woodpeckers, great spotted woodpeckers and griffon vultures, thanks, in the latter case, to the colony that has taken root in the neighbouring borough of Capolat. The route we propose here leaves Queralt along the old path to Espinalbet and comes back along the path made on top of the pipe that brings water to the sanctuary of Queralt.

Queralt and the path to Espinalbet

A prior visit to the church is highly recommended. After that, we can start with renewed vigour, following the red and white marks of the GR.107 (Camí dels Bons Homes – Cathar Path). After about 3 minutes, you will come to the spring called Font del Bou or Ox Spring for reasons that will be obvious as soon as you see it. Shortly after, the route turns off to the right along the old path to Espinalbet. If you look closely, you can see the stone walls built to shore up the path and prevent it from being eroded away. Before crossing the ridge and losing sight of Queralt, there is a vantage point that offers some interesting views of the sanctuary and its woodland.

The path runs along the north slope and then suddenly starts to drop. It seems that at some point the original path was lost as it later climbs to regain the original height. The downward stretches have been recently been improved and it has made quite a difference. When you get to the bottom, just before turning left to climb up the Camí de la Fusta –a broad path used to drag trunks down to the road below-, if you look among the trees to your left, you will see some tumbled-down walls that create a flat, semi-circular area: these were sites for making charcoal. If you look to your right, you’ll see the same shapes, although perhaps a little less distinct. Charcoal was used as fuel for heating and cooking before coal took its place and, being made by slow combustion, the pyres were often built in shady, damp areas in the folds of valleys.

After climbing a stretch of the Camí de la Fusta, the path turns to the right, continues flat for a while and then descends to the stream called Riera de Metge and the houses of the modern estate; it crosses the road to Rasos de Peguera and then turns up the old path to the church. The church has nothing special about it but behind you will see a raised area with some perimeter walls. Here Guillem de Berguedà had his castle. He was one of Catalonia’s greatest troubadours; he wrote beautiful love poems but also biting satires of his peers which, not surprisingly, made him rather unpopular and was ultimately the cause of his death.

Our route leaves the GR 107 and turns left following the rectangular yellow marks of the hiking network. 50 metres down the road, you’ll see the spring. Its water is highly valued by the locals and it is common to see people loading filled bottles into their cars. The route continues along this street, arriving at Els Roures restaurant about 15 minutes later.

From Els Roures, cross the road and turn down a tarmacked path beside the campsite, following the yellow marks. The route turns right along a track and, almost immediately, takes a short cut to cross the stream, coming back to the track on the other side, and starts to climb. The route enters a very attractive grassy pine wood. If it has rained, you’ll see water running down the stream beds. At the end of the track, there is a spring called Font del Perdigall. The track becomes a path and continues to climb towards a rock wall. If it rains, there is a shallow cave in the rock where you can shelter. The path reaches a pass and divides to meet again further along. You can continue following white marks or perhaps the more interesting alternative would be to follow the yellow marks down to the left and then a sharp turn to the right. You will see the entrance to a small tunnel, which has the tube taking water to Queralt inside it. The path is virtually flat; sometimes surrounded by trees, other times opening out to give long views but always attractive. Near the end, the path descends steeply down some well-made steps. The path comes out at the Chapel of Saint John, very close to the starting point of the GR. To make a change, you can go back via the viewpoints on the south side, following the PR-C 73, with magnificent views of the fields and hills of the Lower Berguedà, with Montserrat, Sant Llorenç and the Serra de l’Obac in the distance.