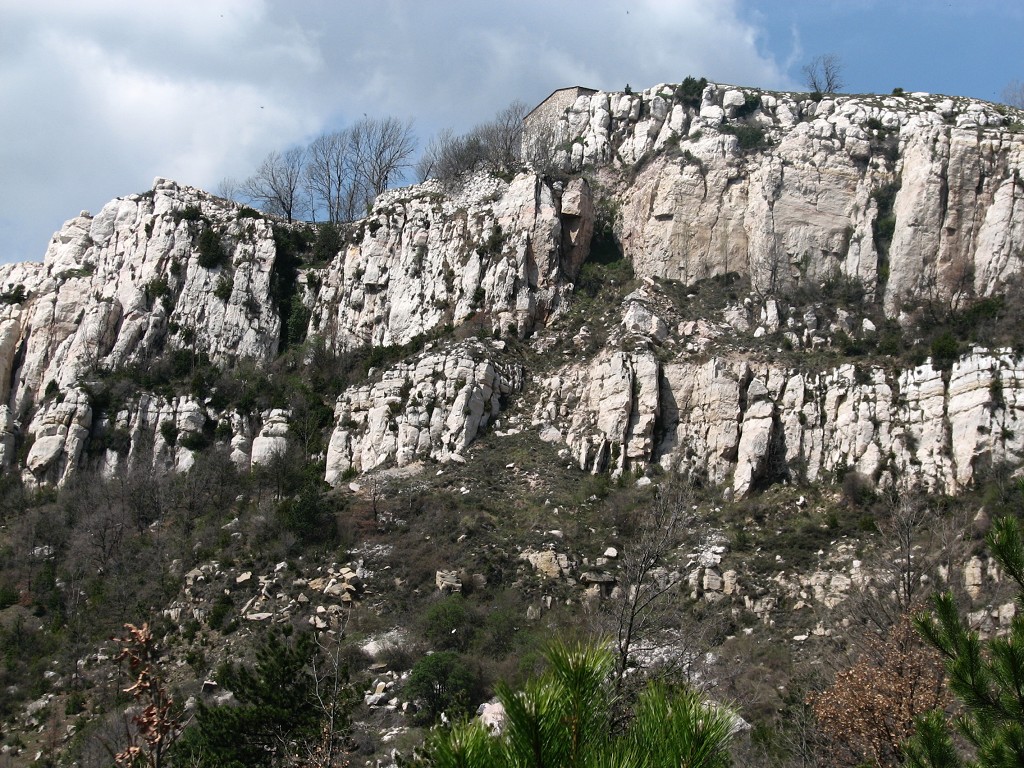 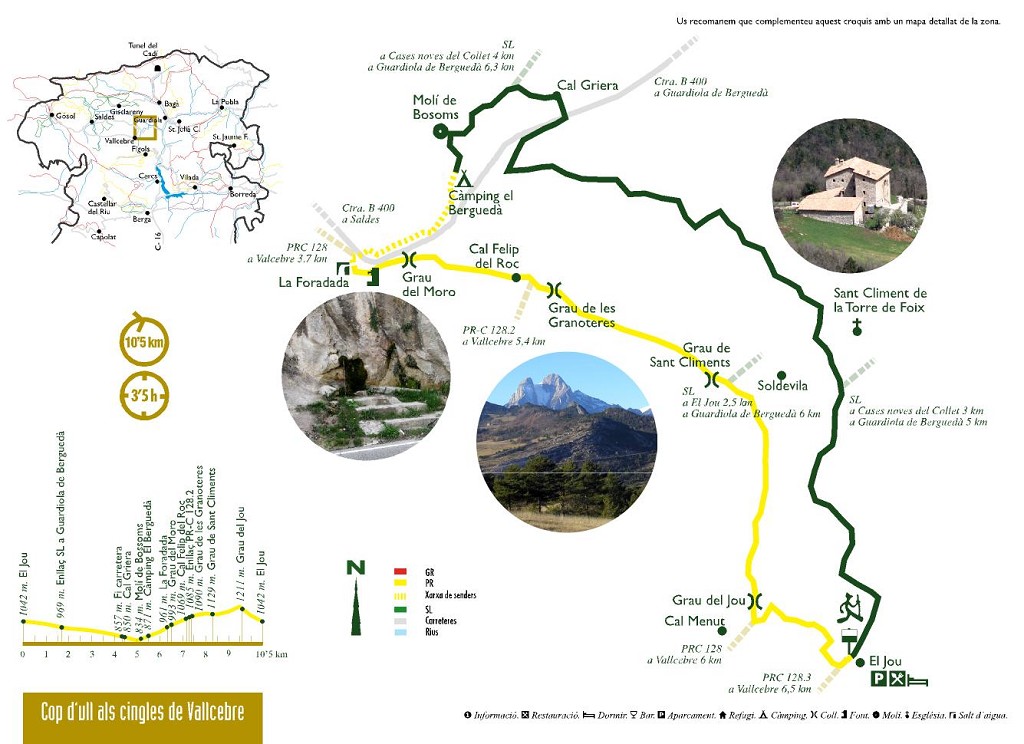 The mining route project –undertaken jointly by the boroughs of Saldes, Guardiola de Berguedà, Vallcebre, Cercs and Fígols – seeks to restore and provide new uses for an area that was severely scarred by the coal mining industry, particularly the open-cast mines. However, you won’t see much of these scars in the route we propose here. Following the foot of the Vallcebre cliffs on the way out and then walking along the top on the way back, the impression you’ll take away is of grand views and a broad sample of the county’s past.

Towards the road to Saldes

The route starts in front of the El Jou hotel-restaurant, following the road to the north. We pass through a fractured landscape caused by the erosion of the soft earth, covered with varied vegetation. A barer area to the right marks the site of an old open-cast mine. As we approach the Torre de Foix –a farmhouse built around a medieval watchtower- and its Romanesque church, the scenery becomes gentler and we can see the old fields, now used as meadows. The road starts to descend through fields and woodland but always with the crags of Vallcebre to the left. At last, to the right, we see the houses of Cal Clotet and Cal Janola, the latter today a horse-riding centre. To the left, you will see a narrow canal that transports water from the Foradada along several kilometres to send it down a tube to a small power station beside the road tunnel of Guardiola. When you arrive at the junction with the road to Saldes, turn right along the road and then, shortly after, left down a track.

The track passes in front of the house called Cal Griera. The house in front is new; the ruins of the old house can be seen behind. Follow the track until you reach a bridge, then follow a path up to the left which will take you to the Bosoms Mill. It used to be one of the county’s largest mills but today only a few ruins remain. With a little effort, you can see the hole through which the water came out on the south wall. Above the house, you can still see the hollow of the pond used to store water brought along a channel from the nearby stream which was then used to work the mill. The path climbs up through abandoned fields and then flattens out, crosses a clearing and then takes an old charcoal-makers’ path. You can still see flat semicircular areas where the pyres were built and, on the ground, little pieces of charcoal. At one point, the path passes between some rocks. These rocks are home to a relic of the Ice Ages: a plant called Ramonda. Don’t pick it! It’s protected. It has thick velvety leaves (which explain its name in Catalan: bear’s ear) and unmistakeable violet and yellow flowers in June. It likes growing on damp rocks in cool, shadowy habitats.

The path continues underneath the road. You will see the same canal you saw on the road to El Jou, but now much nearer to its starting point. The path comes out onto the road. Across the road, there is a spring in the rock face where you can fill your water bottles. During periods of heavy rain, the Foradada stream becomes a raging torrent jumping from rock to rock, quite a spectacular sight. A path climbs along the right of the stream to the bridge you can see from the road. If you stand on the bridge and look upstream, you will see a rather curious structure: it’s a mill built into a small hole in the rocks. The canal bringing water to the mill runs along the top of the wall to the pond behind. The water then entered the mill and came out through the huge hole in the wall. If you want to take a closer look, there is a path before crossing the bridge that will take you down to it.

The route starts to climb along the edge of the precipice. The views gradually open out, particularly behind, looking towards Pedraforca. The path enters abandoned fields and then a track that will take you to the Grau de Sant Climent (a pass for descending the cliffs). Near the pass, you will see a waymarked path to the left that will take you down smoothly to the ruined house of Soldevila and then to the road to El Jou, in front of the Torre de Foix. But our path continues along the top of the cliff. The views of the Llobregat valley and the cone-shaped Puigllançada to the north are magnificent. We come to a track which gently rises to the house of Cal Menut. The route leaves the track and enters an area of karstic washouts, cracks in the ground caused by underground water currents. Watch where you go. A small cross marks a monument built in remembrance of a pilot who died when his light plane crashed.

Shortly before Cal Menut, the marks take us to the left, to the Grau del Jou, another of the routes up the rock face. Chains have been placed that you can hold to help you down. Apart from being narrow, it poses no particular difficulties. At the bottom is the track that will take you to El Jou.

Take care when walking near the karstic fissures near Cal Menut. Some have been filled in with bits of pallet and other rubble but it’s a good idea not to get too close. People who don’t like heights might feel uncomfortable along some of the more exposed stretches, particularly between Cal Menut and the Grau de Sant Climent. Keep a watch out for cars along the roads, particularly the Saldes road, as it usually has a lot of traffic at weekends and during holiday periods.