From Queralt to Corbera 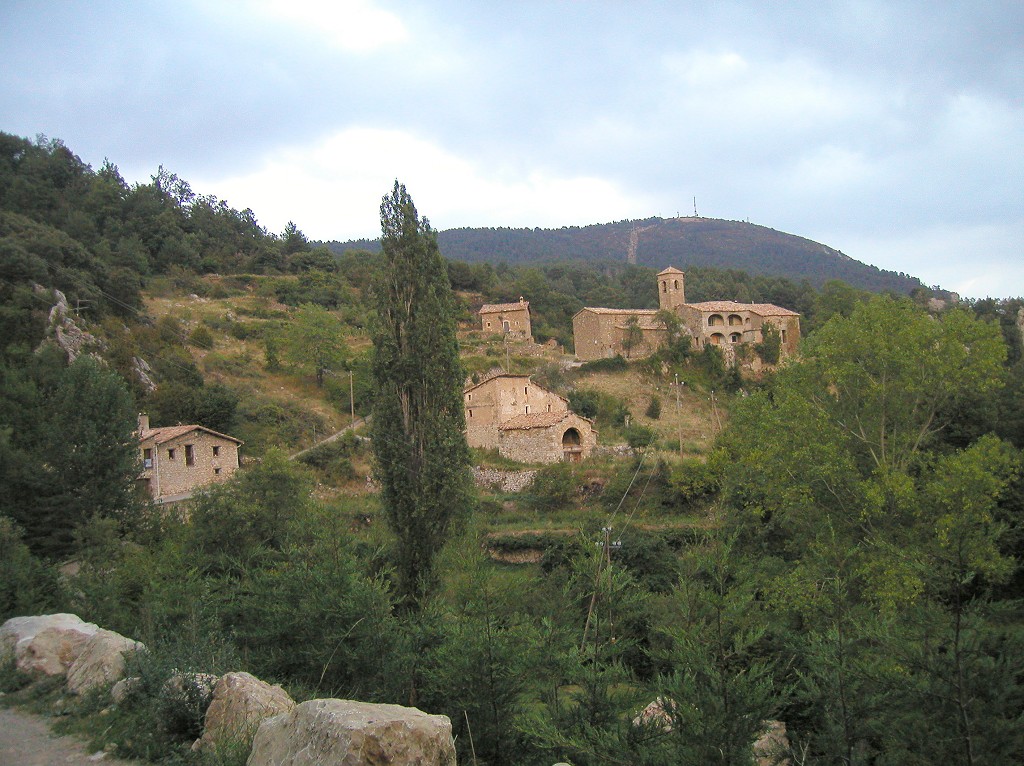 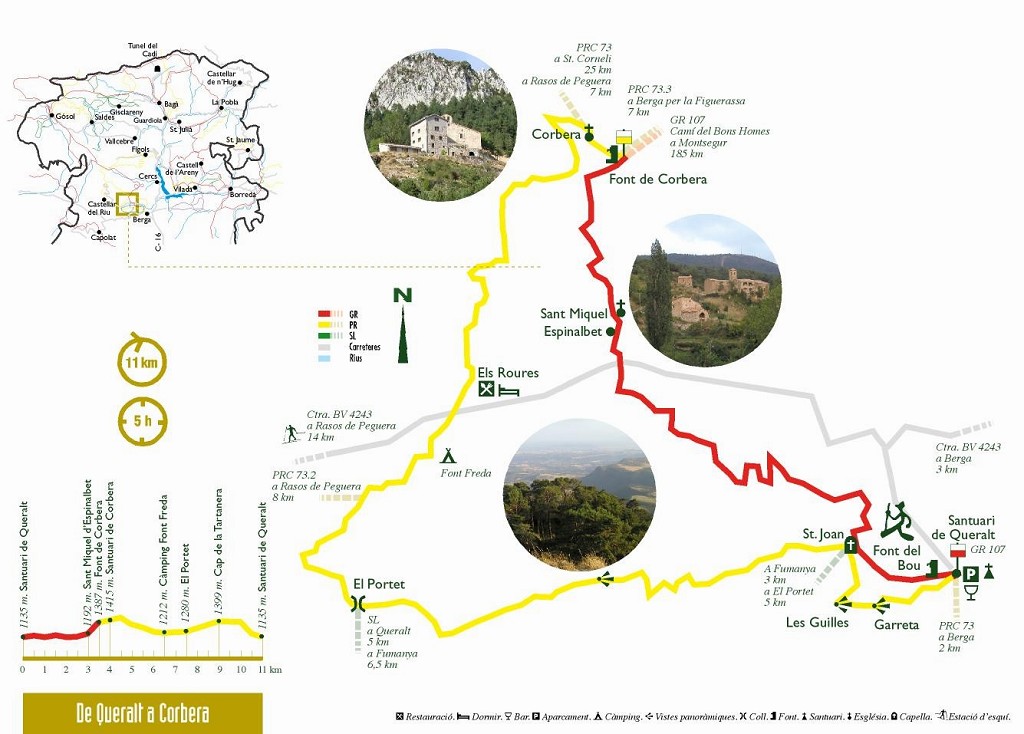 Though perhaps not with such devotion as the Queralt sanctuary, the Corbera sanctuary also had its Virgin found by shepherds in a cave. The present church is from the 17th century with later annexes. At the beginning of the 20th century, it still provided a lodging service, with a room and kitchen for families staying there, and also sold religious objects. Today, it is closed most of the year and is only used occasionally as a lodge.

This route shows two paths that connect both sanctuaries, both of which go through the village of Espinalbet. As it goes through ridges and high points, there are exceptional views both to the south and the north.

After visiting the church at Queralt, which you must do, follow the GR 107 waymarks that begin at the esplanade above the church. After about three minutes you pass by the Bou spring, which gets its name from the genial oxhead shape that the spring takes. Soon afterwards, the path turns to the right and takes the old path to Espinalbet. If you look carefully, you can see the walls built to hold the path and halt erosion. Before crossing the ridge and losing sight of Queralt, you come to a natural belvedere that provides an interesting view of the sanctuary and its woods.

The path flanks the northern face and suddenly begins to level out. It seems that at one time the original path was lost because you later have to go uphill again to recover the altitude lost. When you go down, just before turning left and going up the trailing path, look between the trees on your left. You will see half standing walls framing small semicircular plains: these are coal bunker squares. If you look to the right, you can see that these forms are repeated, though perhaps less clearly. There are books describing how the coal was made and what the colliers' lives were like. There are a couple listed in the bibliography. Vegetable coal was a basic product in homes before the use of mineral coal became generalised, and a trained eye may still notice the squares in shady places, using streams beds and folds in the terrain.

The path goes into the modern Espinalbet housing estate, crosses the Rasos de Peguera road, and again takes the old path towards the church. There is nothing remarkable about the church but behind you can see an upper plain and some perimeter walls where once stood the castle of Guillem de Berguedà, one of the great Catalan troubadours who wrote beautiful verses on love but also harsh satires of his contemporaries, which brought him many enemies and was eventually the cause of his death.

If, instead of turning right to the church, you walk a small distance down the road going left, you reach a spring. The spring water is much appreciated and you often see people filling their cars with pitchers. If you prefer not to go up to Corbera, you can stay on this road, which later becomes a dirt track, and follow the white waymarks for about 15 minutes until you come to the Els Roures restaurant, where you can regain your strength and continue along the route towards El Portet.

For those keeping on towards Corbera, from the church at Espinalbet the path goes up northwards in search of a trail among the rocks. In the initial section of the path you can still see the stones driven in sideways to stop the passage of animals and people from eroding the path. When you come out onto the meadow below the sanctuary, the path follows the track going east. Just before connecting with the Corbera track to the Oreller pass, you will see the Corbera spring at the foot of the path. After having a rest and enjoying the views from Corbera, make the descent by following the yellow and white waymarks of the PRC - 73.

From the meadow below Corbera, the route goes down to the west along a narrow path that leads to a newly built track. You have to keep an eye out here, because after a little while the route leaves the track and goes down along a track going left. From here the path descends along paths and tracks, crossing fields and woods until reaching Els Roures. Your next objective is now within view: the Gran pass, a broad crevice opening out to the Queralt ranges.

After passing the Gran pass, you will see the Portet house below, well protected from north winds. It's well worth sitting in the fields of the house for a moment to take in the view. There is a spring beside the house. Although nobody lives in the house, it is in good order and has an owner: be considerate.

The path turns left here and goes up to the ridge. There are two belvederes especially prepared as such, although along the route to Queralt there are countless opportunities to take in panoramic views of both the north and the south. This is truly a wonderful sight.