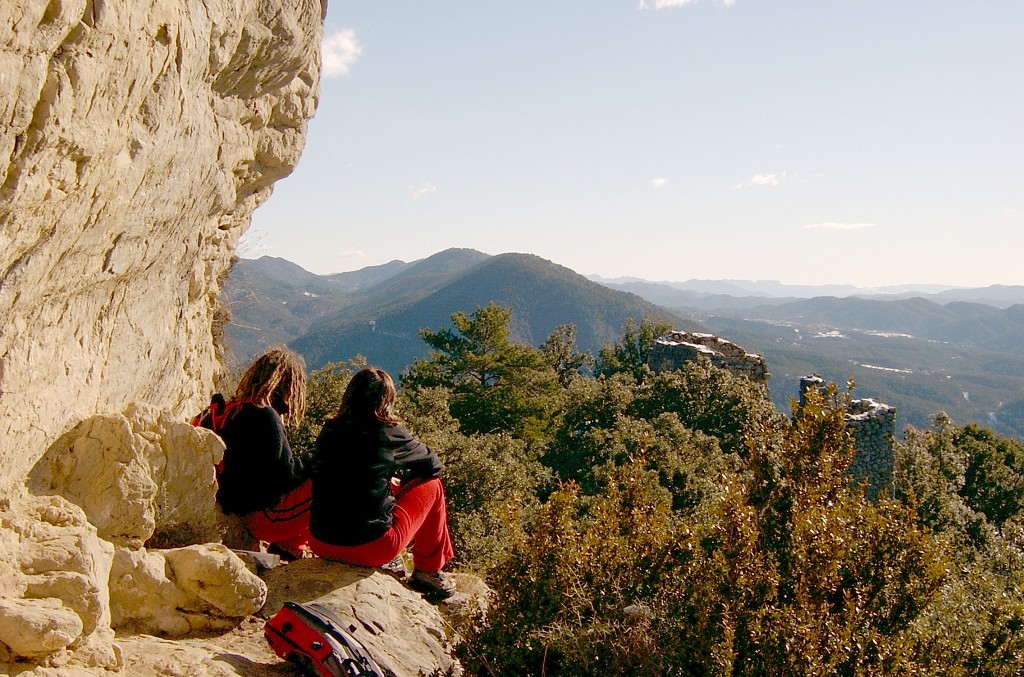 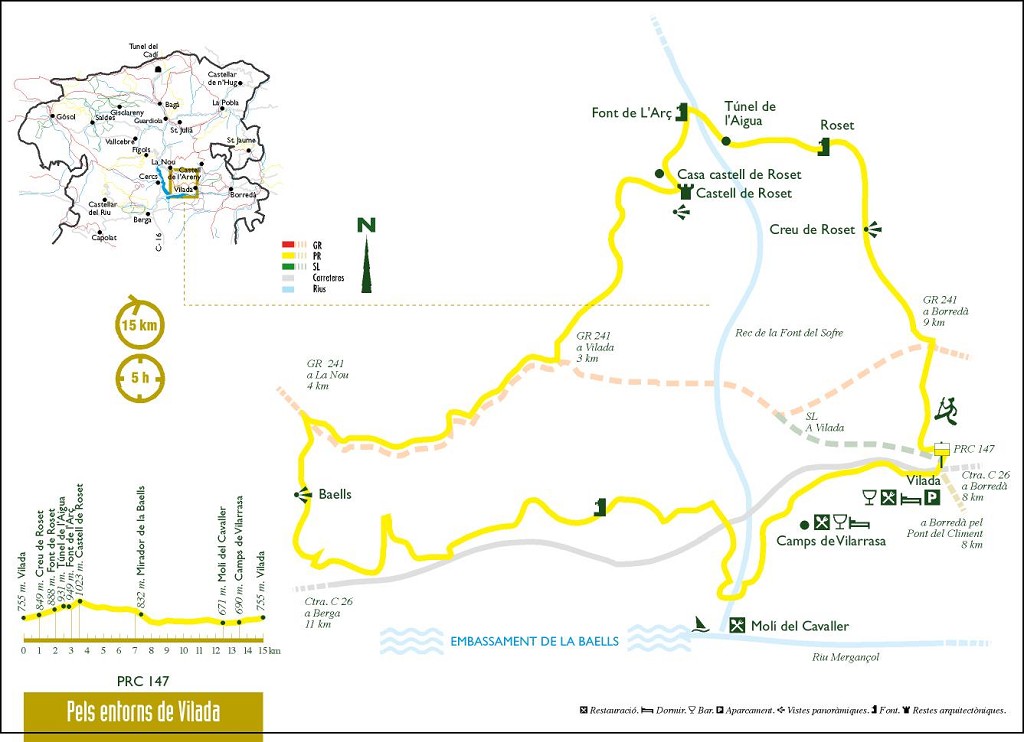 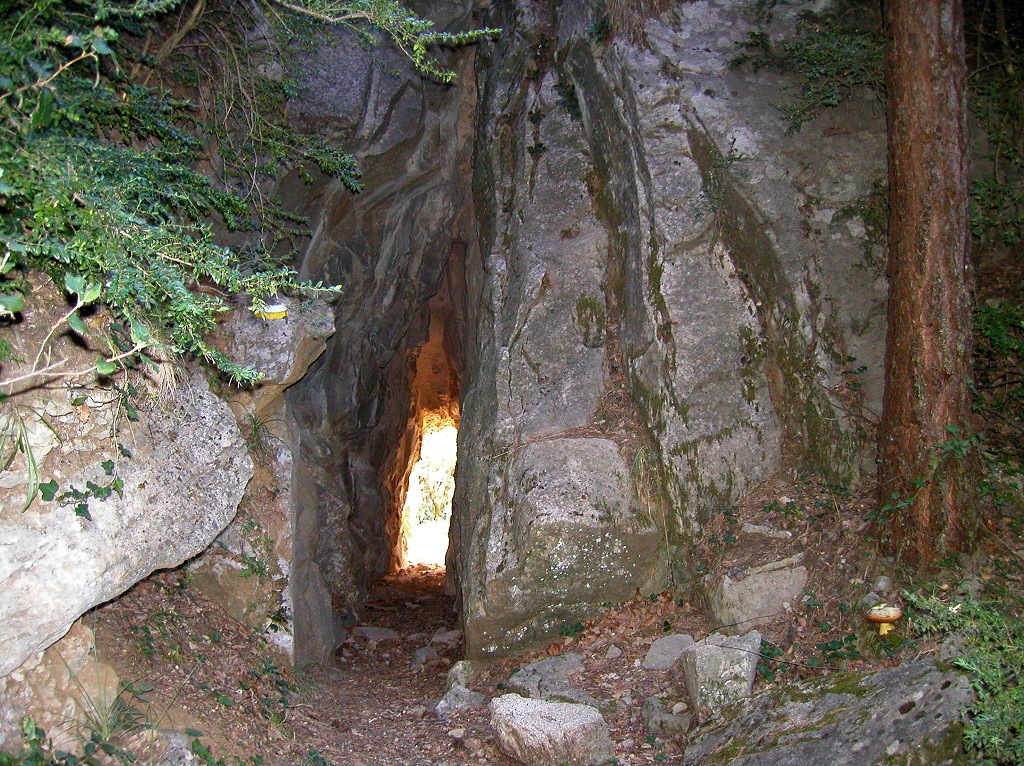 This area is full of spots that, not too far off, offer many surprises and curiosities. The northern section of the route is one; over a backdrop of limestone mountains with impressive shapes, this route reveals secrets of the recent and distant past of these lands.

From the Gronxadors de Vilada park, you go towards the church and then go along a very steep concrete road that leads to the cemetery and the water tank. From here you follow the track going north. After crossing the GR 4 a little further on, you see the remains of a pipe that tells us what the path is for: to carry water from nearby springs to the village of Vilada. Hidden in the woods, you also see walls and the terraces of old fields. You have to remember that, not so very long ago, this whole area looked quite different.

After crossing a track, the path goes uphill until it reaches a tank with a fountain tap to fill canteens. From here the path levels out while meandering along slopes and rocks until it reaches the Aigua mine, a tunnel excavated into the rock to avoid the rocky buttress. Before going in, have a look at the rock above: a holm oak has managed to get its roots inside the rock to extract food from where it seems impossible to do so.

Soon after going past the tunnel you come to the Arc spring, which feeds the tank you came to a little while ago. The three mouths give you an idea of how abundant it once was, but unless it has rained a lot, all the water is now channelled downstream.

After a short climb up, the path emerges onto a wide pass. To the right are the fields and the house of the Roset castle, an 18th century farmhouse, today abandoned. To the left you see a path that went up to the castle, and in some spots you can still see the stones placed to keep the path open. The path crosses a crevice in the rocks and then goes down to a small esplanade where you can see the remains of the castle, now cleared up and strengthened. On the south-eastern corner you can see the remains of the original tower; the rest were added in later periods. You can also see a water cistern. If you go towards the southern point of the mountain, you can enjoy a splendid panoramic view of almost 360º that encompasses the meadows below and the wild Picancel ranges in front, Gotzera to the west, and the slopes of the Sobrepuny behind. If you look towards Berga, on the other side of the reservoir, you will see a mountain shaped like a pyramid where there was once another castle, Pugi-Arbessós castle, which was also visually connected with the Blancafort castle between Berga and Cercs.

You now go back down to the castle house to continue along the track until the point where it runs between two rocks. A path emerges here to the right that crosses the stream and becomes steeper until it goes through an interesting passage, which is the purpose of this path, because if there were no passage there would be no path. This old path once connected Roset to the houses in the Clarà plain and, further along, to the village of La Nou.

The path runs into an old track and then links up with the GR 4 that goes up from the Viladomat house. Turn right and take the Vilada path to La Nou, which was opened in the 19th century to make your journey less steep, where you can see walls to hold the path on the slopes and at other points where it was necessary to excavate the rock to make room. The old path went further up and then went down through Casadesús, further north.

The path leads to a grassy track. The GR turns right and continues to La Nou, but the PR turns left, crosses the road after a steep drop and then takes the old path from La Nou to Berga - a section of the original path was blocked by a scree that you must now skirt - after crossing the scree you reach a rock buttress that provides an interesting look-out towards Baells and its surroundings. The path descends in S-bends until it again reaches the road. From here you keep going along the old road - today closed to traffic - and you finally go downhill along the current road to the track of the Sala house, which you reach after going quite a way along the track. This house is still inhabited today and has centuries of history behind it - the eastern wing is mediaeval in origin with 16th and 18th century additions. The path goes behind the barn and then goes up and down, becoming a mixture of path and track, and going above the Bertrana house, and eventually leads to the Vilada road.

When you reach the road, keep on it to the right and then go down towards the reservoir to link up with the recreational areas of the Cavaller mill and the Vila-rasa fields until you come out again to the road going into the village where you come to the Clotassos spring, after going past the first few houses.

You can shorten the route at two points:

· From the house of the Roset castle you can follow the track to the road and then turn left towards Vilada or on the GR you come to just before reaching the road, from where you would emerge at the PR right at the beginning of the Aigua path.

· Once you have gone along the Grau path, you can turn left when you link up with the GR, which takes you to the same track as before.