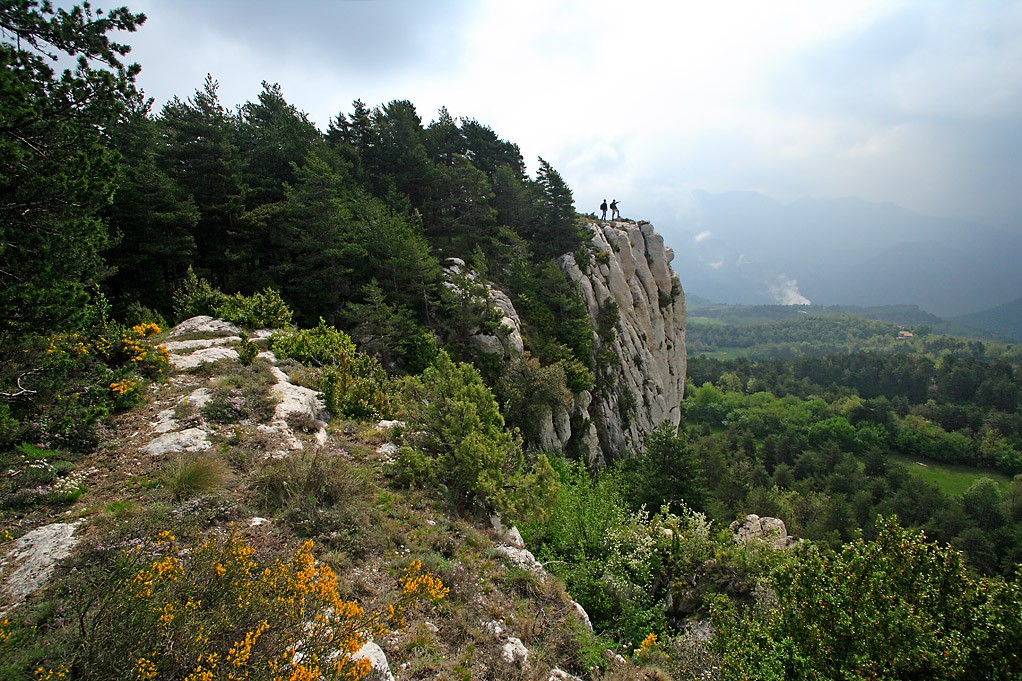 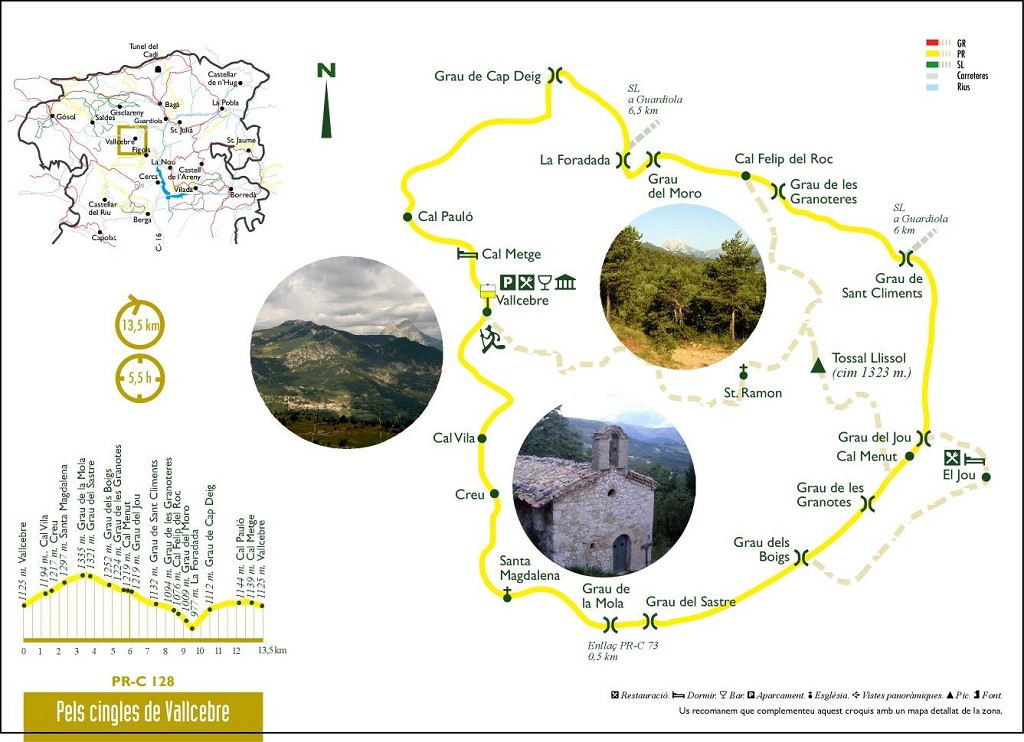 The village of Vallcebre lies in a kind of tilted bowl, surrounded on virtually all sides by limestone crags. This circular route takes us along the perimeter of these crags and it is precisely this feature and the magnificent views of almost all the mountain ranges of the Berguedà and some of the Ripollès that give it its special appeal. For those who like long, spectacular views, this route will delight you virtually from beginning to end. The type of countryside the route passes through is basically agricultural. Vallcebre also has a mining heritage which you can discover with other waymarked routes and the village is also starting to become known for its dinosaur fossils.

Our route starts in the village. Follow the main street northwards and then turn left down a track signposted to the chapel of Santa Magdalena. Once outside of the village, we will come to two houses, Cal Vila and Cal Pons. Beside the track, there is a public washing place supplied with water from the nearby spring, the Font de Balaians; a reminder of how people used to live. Before us lie fields, now converted into meadows. The path heads towards the woods and, on our way, we pass through old terraces with their dry stone walls and today colonised by woodland. We arrive at the chapel of Santa Magdalena. Built in the 17th century, there is a procession to the chapel each year. Beside the church, you will see a dry spring with a cistern made of natural stone. The spring ran dry when a mine gallery perforated the water course but the water was traditionally believed to cure warts.

From the church, the marks take us through the woods until it links with the path to Vallcebre from the Grau de la Mola, which is our next destination. The famous turn-of-the-century Catalan rambler, Cesar August Torras, said in his guide of the Berguedà, published in 1905, that there were only three “graus” or passes up the Crags or Cingles of Vallcebre: Grau de la Mola, Grau de les Granotes and Grau de Sant Climent. This route passes beside all three. In fact there are more but Torras, being the gentleman he was, only took into account those that could be ridden up on horseback. There are other “graus”, narrow paths that make use of faults and folds in the rocks to pick a way down and which are only accessible by foot. This Short-Distance Path proposes two as variants: Grau dels Boigs and Grau del Jou.

From Grau de la Mola, the path heads towards the power line. From here all the way round to the main road to Vallcebre, the route follows the edge of the cliffs, with spectacular views that gradually change as the path progresses round the circle.

After the Grau de les Granotes, our route comes to Cal Menut, a farmhouse devoted to livestock raising. Just before the house and also behind the stables, you will see some mounds looking like hobbit houses with a small entrance. These are “trumferas”, places where the potato harvest was kept. The extensive fields surrounding the house were probably converted at some time from wheat-growing to potatoes, which were better suited to the altitude and climate.

Behind the house, the route passes close to a small monument built in memory of a pilot who died when his light aircraft crashed there. It is also an area pocketed with karst subsidences, holes in the ground caused by underground water currents. Best to keep a safe distance from them. Below, we can see the country hotel El Jou and behind it the scars of an old open-cast coal mine.

The route comes back to a track and when the track comes to an end, it winds up and down, following the edge of the cliff, to the Grau de Sant Climent, where it joins another historic path. On the plain below, you can see the Torre de Foix, a large house built around a medieval tower, and the small Romanesque church of Sant Climent.

Our route continues through abandoned fields to the Foradada, a gorge through which all the water courses in the Vallcebre basin must empty. When you cross the bridge over the stream, you will see a rather strange construction below you, slightly upstream. It is a mill built into a small space in the rocks. The canal bringing water to the pond used to run along the top of the wall before emptying into the pond, which is a roughly square-shaped, overgrown space behind. The water then entered the mill proper and exited from the large hole in the wall. Once you have crossed the bridge, you will see a path to the left that will take you down to the mill if you want a closer look. If you need to replenish your water bottles, a path with the green and white marks of a local path descends to the right to the road, where you will see a spring.

Our route climbs to regain the ridge, passing beside the remains of a ropeway tower built in the 40’s to take the coal from the mines in Vallcebre to the Llobregat valley and the old railway. Once on the ridge, the route picks a way through the rocks, sloping gradually upwards towards the Vallcebre road. It then crosses the road and enters what was probably the village’s best farming land, passing beside various farmhouses, and back to our starting point.

If this circular route seems too long for you, how about a semicircle. Just before Cal Menut, a track to the left is marked as a variant of the Short-Distance Path, climbing towards the Tossal Llissol, a hillock with a flag at the top. Climbing through the fields, we see Cal Menut below us. When the track makes a sharp turn to the left, you can see the mounds made by the ‘trumferas’ in the fields, especially to the left.

The Tossal Llissol is another fabulous vantage point, offering views of almost all the mountain ranges in the area, with the village of Vallcebre below. It’s worth stopping a while to take it all in. From the Tossal, the route descends towards the church of Sant Ramón, passing through fields and with the mountains of Ensija and Pedraforca in the background. Although a relatively modern church, built in the 19th century, Sant Ramón has a certain charm and its location is very picturesque.

From now on, we start to enter inhabited areas, some houses restored as holiday homes, others more or less unchanged. The route, descending all the time, switches between tracks and paths. Watch closely for the waymarks as the route makes some sharp changes of direction to link up with the next part. The scenery is now predominantly woodland. The route closes by crossing two streams to take us back to our starting point.

This route can also be walked from the Grau de la Mola. Although this “grau” is not waymarked, it is easy to spot as a well-trodden path that enters a broad gap in the rock wall. To get there, follow the road from Figols to Fumanya. You will see the path after a sharp bend in the road, at the road’s closest point to the cliff wall. Starting here will save you a few miles of driving if you are coming from the south and it will also give you time to have a break for lunch at the village of Vallcebre before walking the last stretch.

Take care when passing by the subsidences near Cal Menut. Most have been filled with wooden pallets and rubble but it’s best not to get too close. People who have a poor head for heights may feel uncomfortable on some of the more exposed stretches, particularly between Cal Menut and the Grau de Sant Climent.