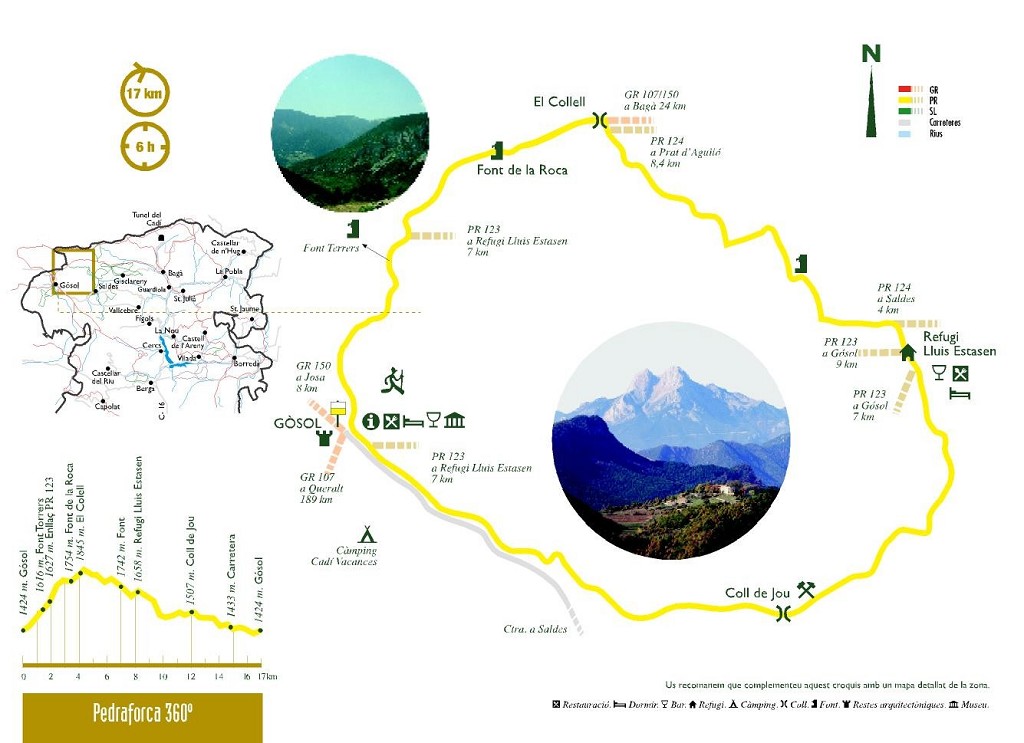 Pedraforca 360º is a route around the most magical mountain in Catalonia: Pedraforca. We suggest taking a trip round the perimeter of the mountain to discover every one of its corners. The route starts from Gósol, taking the Cerdanya path which will take you to Collell, the natural pass from the Cadí range to Pedraforca, and the dividing scarp between the Segre and the Llobregat rivers. From here, a descent prevails which, passing through Jaça dels Prats, the Coll de Jou and the Saldes - Gósol road, also known as the Miners' Way, will bring you back to the starting point.

This route can also be started from Saldes and there is also the option of breaking it down into two days and overnighting at one of the guesthouses in either town.

You leave from the central square in Gósol along Carrer Picasso, to the left-hand side of the town hall. This first street turns to the left to the Plaça d'Agustí Pere i Pons, where there is a fountain with a cow's or bull's head and a public washing-place. Leave the square by Carrer de Cerdanya, which is on the side as the washing fountain. The paved road ends and you leave the town by the dirt track leading off to the left.

It crosses the Esganagats stream, where the path takes a sudden change of direction and enters the bottom of a gully crossed by a watercourse that wends its way between the rocks and continues on the other side.

The GR comes out on a track that has already been visible for some time at a lower level. Continue along the track, rising towards the right. You will pass the Font Terrers picnic area, leaving the Pela-roques route to your left and continuing straight ahead through a meadow. This is the Terrers spring. The spring is in a pool at the end of the meadow; it has four large outlets which feed the pool. Continue along the edge of the pond with it always on your left-hand side.

You then cross the Coma dels Caners gully. Shortly before getting there, there is a fork where you leave the branch going straight ahead and take the left-hand one. Having passed the stream, you enter a black pine wood that is heavily transited by cattle, which have opened up a lot of tracks. Here, the PR you have followed since Gósol goes to the right. Carry straight on. All along this stretch you will find various milestones and numerous forks in the path which all eventually converge at the same point.

A large meadow opens up surrounded by black pines and steep rocky cliffs. To the south you can see the Pedraforca massif and to the north the Cadí range, specifically the peak of Costa Cabirolera. You need to cross the meadow and head north-east, turning slightly to the left as you do so.

You will cross through a pass between the rocks. On the other side of the pass, the valley of the Cerneres river opens up before you. All the mountains you can see around you exceed 2,000 metres in height and the Cadí range to the north rises to over 2,500 metres. Cross the pass and continue to the right on a flat path that maintains this level.

You now come to the Font de la Roca. Here there is a spring and you have excellent views across the valley, where a few buildings in ruins can be seen.

Further on, you need to cross two parallel gullies, very close to each other, to continue on the route. These gullies come down from Roca Roja, at 2,034 m, which is right above you. Finally, you cross a third watercourse that comes right from underneath Roca Roja. The path to Collell is now an enormous meadow that poses no difficulties. From here, the way is a little indistinct; you can take whichever path you like to get to the pass.

You reach a point where the path you are following through the meadow converges with a forest track which climbs up from the bottom of the valley below and comes from Josa de Cadí. Follow the track towards the right, going upwards, until you get to El Collell (1,845 m). This pass separates the waters between the Llobregat and Segre river basins. On the eastern side, the Molleres stream runs down, leading to the Llobregat river by the side of Saldes. On the western side of the pass flows the river Cerneres, which runs into the Josa river and later the Vansa, a tributary of the Segre. The view from the pass is outstanding, especially of the Pollegó Superior (northern prong) of Pedraforca. The track joins the one coming from the Gresolet viewpoint, which is the one we will be following from now on. The Camí dels Bons Homes continues climbing on this new track towards the left. You then start descending and after a hundred metres you leave a path to the left, which would take you to the sanctuary of Gresolet. On the track, you pass by a spring and some troughs on the right, finally coming to a point where there is an aerial ropeway used to supply the Lluís Estasen lodge. You need to take the path on the right which leads directly to the lodge. The track you have left behind would have taken you to Saldes, via the Gresolet viewpoint, which is less than one kilometre away.

The ascending path will take you to the Jaça dels Prats where the Lluís Estasen lodge is located. Continue in a southerly direction, following the PR markers. After about half a kilometre, you will come to a fork in the path. You need to take the left-hand path, which descends gently. If you continued straight on, you would come out under the cleft of Pedraforca. From here on, you will be skirting Pedraforca by a narrow path that winds through a pine wood. The path comes out onto a wider track where there is a monolith and a spring, from where you can see the Paret de Roget. Keep following the main track and you will soon pass a path on the left which would take you to the road from Saldes to the Gresolet look-out point. Follow the track towards the west until you come to the open skies of the Coll de Jou. You need to cross the meadows and continue on a path which is the remains of the old road from Saldes to Gósol, once known as the Miners' Way. From here you have some lovely views over Espà. This path, very flat, will leave you on the gravel track right under Gósol's mass of scree, where all you need to do is get to the crossroads to take the old Gósol road back to the square.