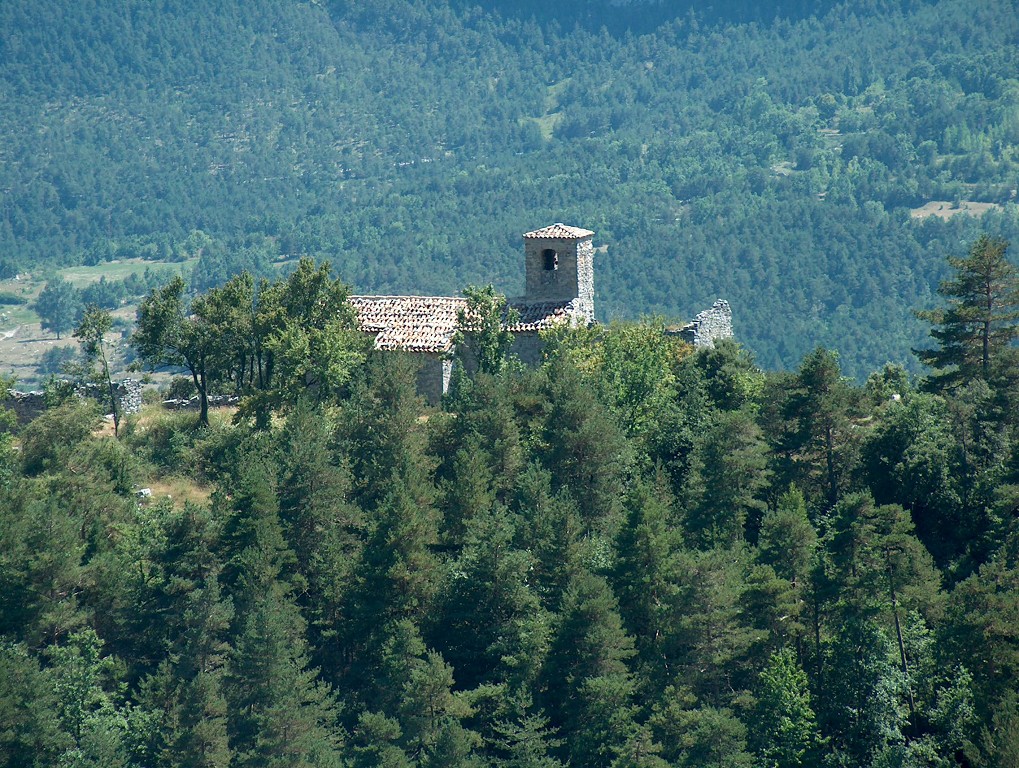 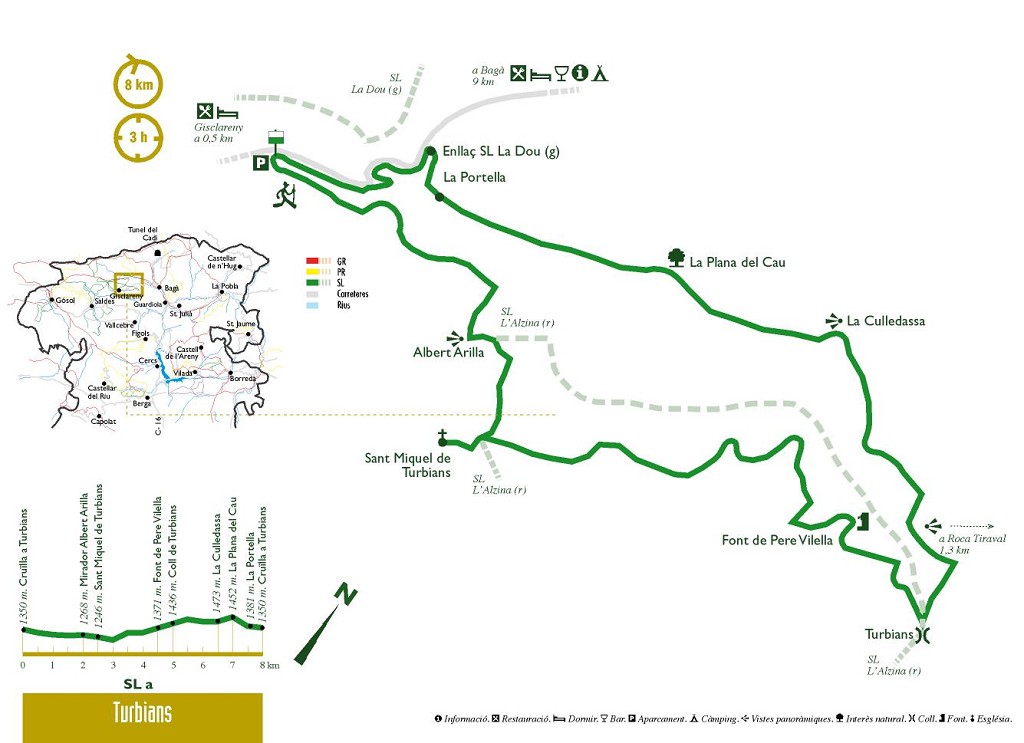 Gisclareny is a borough with a scattered population. In the middle of the 19th century, there were some 120 farmhouses scattered throughout the territory, most of them quite impoverished. Hikers at the turn of the 20th century agreed that the village was a place where misery reigned, with subsistence agriculture — very far from the idyllic environment of today. This route gives you a glimpse of some of these farmhouses, some of which have been turned into second homes, others left in ruins. The terraced land that can be seen on the southern face bears silent witness to attempts to wrest sustenance from the earth. It also affords excellent views of El Pedraforca, Ensija and the Saldes valley along the southern face, and El Moixeró and the Bastareny valley along the northern face. The route runs inside the Cadí–Moixeró Natural Park.


Going downhill, towards the Turbians pass, you will find a belvedere in memory of Albert Arilla, a local gamekeeper from Gisclareny who died in an accident on the mountain. From the belvedere you can see the church at Turbians, the town of Gisclareny (Roser and Berta neighbourhoods), the Ensija ranges and El Pedraforca.


The route soon takes you to Sant Miquel de Turbians, an old parish church. Although it has been documented since the 10th century, the edifice shows no feature belonging to this period. Only the entrance door shows traits of the Romanesque, the rest is the result of renovations carried out in the 18th century. It has recently been restored. The key is at Cal Pedrals (on the road to Gisclareny, at the intersection of the Vilella district).

Alongside the church bell tower, you will see the Cal Campaner house. Ruins of a straw loft can be seen to the east, and a pond at the pass.


From here you turn back and continue until you get back to the waymarks. After crossing the track, take a path (which has some quite narrow points and loose soil so watch your step), that flanks the mountain until you emerge below the Cal Raler house, one of the most prosperous houses in its day, now turned into a second home.


A little while later you will come to the spring of Cal Pere Vilella. It is concealed under rocks. Take off the rubber cap and you will see a pipe from where the water spouts. Most of the water has been channelled towards an underlying pond. Some 20 metres before the spring you will come to the ruins of Cal Perleta, which is overrun by vegetation. Look out for low corner walls beside the path: this is the house. It was abandoned in the second half of the 19th century.

In 2004 it was restored the old house called Cal Pere Vilella to open the farm house Rústic Vilella, at the foot of the forest track that goes to the Turbians pass. This was abandoned at the turn of the 20th century.


From here, you have to follow an uphill track until you reach the Turbians pass. At this point there is a signpost marking the direction to take to reach the Roca Tiraval belvedere. Another local path to Gisclareny converges at the same point. Continue the route along the sign-posted path, which forks after about 5 minutes. If you want to go to the Roca Tiraval belvedere, go right along a path that is not signposted (you can see a > cut into the pine tree in front). You have to walk for about 20 minutes along the ridge until you reach a flagpole. There is a notebook there to write down your impressions, if you so desire. There are magnificent views of the whole of El Moixeró, from the Pendís pass to El Puigllançada, with Bagà at your feet. To return to the sign-posted path, go back along the same track.


For those who choose not to go to the Roca Tiraval belvedere, a few minutes after passing the Culledassa pass you have another opportunity to take in a similar view from a natural balcony.


Climb up amidst the pine trees to reach the Cau plain, located at the side of the mountain. Once pastures, they are now splendid woods of Scots and mountain pine.


At the final descent of the route, the path passes by a canal in the rock and leads to the front of a limestone wall. Here there is a path going left. Follow this path for three or four metres and you will come to a shoulder, in front of which you will see the ruins of the Portella house right alongside the rock looking south. This house was also abandoned very quickly; by 1860 there was no-one there.