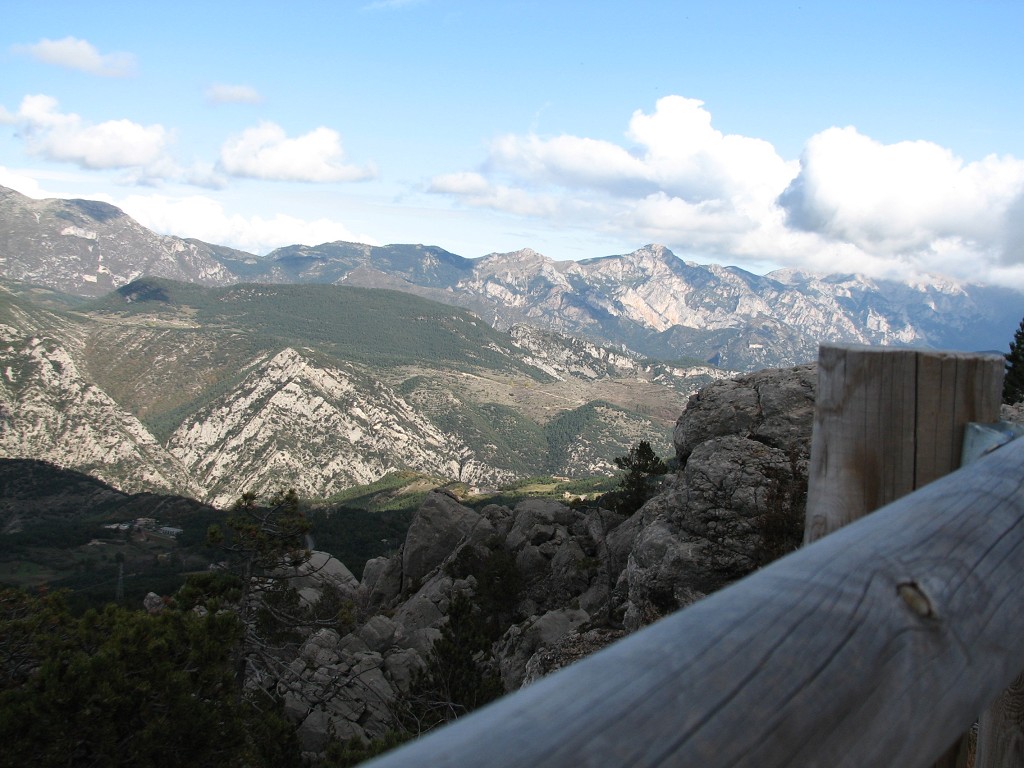 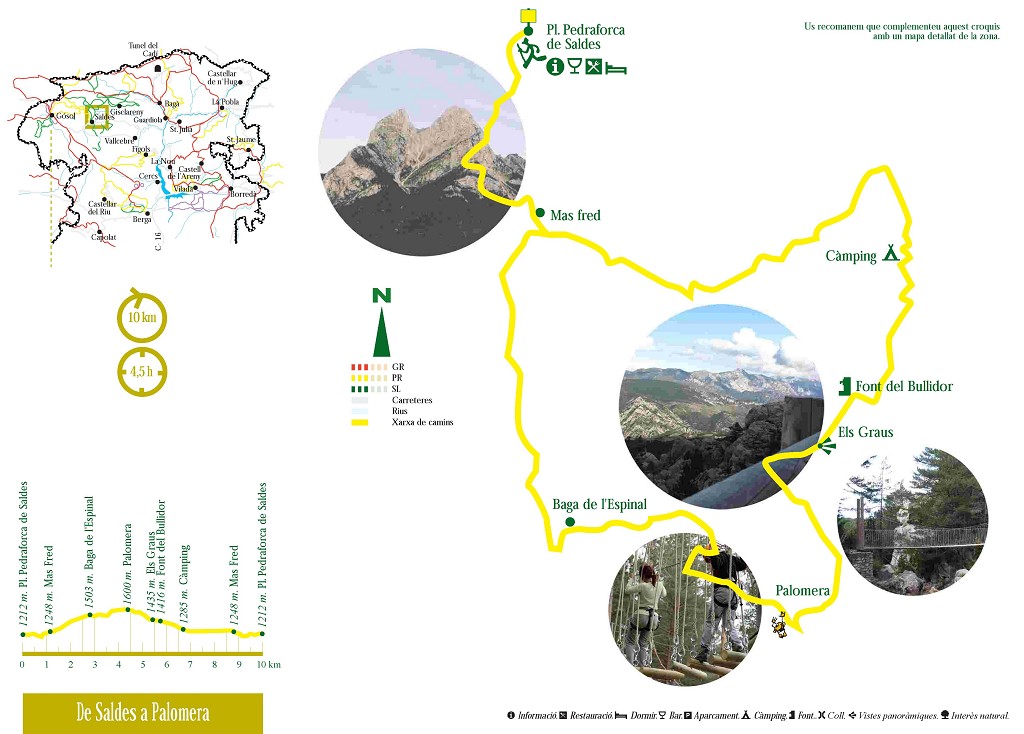 Within this area, Pedraforca is a familiar sight and many people also know the range of Ensija facing it to the south but what lies between the two is much less known. This circular route provides an opportunity to explore a very interesting piece of territory with lots of history, culminating in the Adventure Park at Pleta de la Vila and the medieval shepherds’ settlement of Palomera.

We leave the village of Saldes, heading for the main road, which we cross and follow a path down to the river. The first few metres descend through fields with the odd view of the recently closed mining facilities at Saldes. On the other side, we enter woodland and as we gain height, the path becomes clearer, with a well-defined course among the odd wall-lined field. We arrive at the small house of Mas Fred (which means Cold House in Catalan and no wonder, considering its position on the north side of the river) and then a lane. When the first roads were built in this area, around the 1940s, there was a junction at Maçaners. One road went to Saldes and the other, our road, continued along the north side to Gósol. Hence its name: Carretera de l’Obaga which means Road of the North Side.

We cross this road and enter abandoned fields again. After following a stretch of dirt track, the route takes a path that climbs southwards. Originally, this path was used primarily to take animals, particularly sheep, to the pastures higher up. There are two clues that give us an idea: first, its width; and second, the stones lining each side to keep the animals from entering the fields. Behind us, there are magnificent views of Pedraforca and, beyond, the Cadí range. The route crosses a track, passes underneath a power line and continues southwards. We see signs of fields again and we enter a young wood. One more short climb and we enter an extensive area of flatter land with broad terraces – an unmistakable sign of having been used to grow crops –: it is the Pla de l’Espinal. Although it would perhaps be too much of a detour from our route to see them, on the eastern edge of the Pla, there are the ruins of corrals for keeping animals. This simultaneous use suggests that crops weren’t grown every year – after all, we’re at 1,400 metres above sea-level and facing the north! After a harvest, the land was left to go fallow for a few years and the sheep were allowed to pasture so that they would fertilise the soil with their droppings.

Our route continues to climb until it joins one of the nature routes at Palomera. The track crosses a gully and climbs gently. We enter a flat area: to the right, carefully placed stones in the vegetation indicate the ruins of corrals and a stone hut, no doubt dating back 2 or 3 centuries, and to the left, some fields. Once again, dual use of the land but on a smaller scale.

The track comes to an end and we climb a steep, recently-made path. It is part of the same nature route. We come out on an area of flat land with a magnificent viewpoint of the mountains to the north, including Pedraforca. The path passes beside the circular remains of a stone hut; here too from time to time crops were grown. The path finally emerges beside the road. We turn left to follow the path through the trees and, in 10 minutes, we are at Pleta de la Vila.

The traditional use of this structure is to provide shelter for shepherds and their flocks. Today, part of it has a more modern and entertaining use: an adventure park, open from Easter to mid-October, and a small bar. To go to Palomera, follow a signpost to the left of Pleta de la Vila. Initially, the path keeps level. We see stone walls on the right which are older structures also used as pens for animals. On the other side of the gorge, the rock of Palomera with clearly medieval structures. The path descends to the foot of Palomera and a fainter path climbs up to the settlement. If you go up, please don’t disturb the stones! To the right, there is a narrow gorge with small caves around which low walls have been built, presumably also for animals. To continue the itinerary, you must climb back up to the Pleta de la Vila.

We pass behind the corrals and, beside another viewpoint, we take a path that descends with the characteristic zigzag of an old path. We are still following the nature route. We come out onto a track and cross the stream over a recently built suspension bridge. At the end of the track, we find a path that enters an area of rocky terrain. It is perhaps the most memorable part of the route. We are surrounded by strange-shaped blocks and rocks and further off to the right, we see a veritable chaos of boulders. We pass by a finger-shaped rock and the route turns to the left. However, if we turn to the right down a fainter path, we will come to another viewpoint with magnificent views of Pedraforca and the Moixeró range. Continuing the descent, now to the left, we join the route again. Further down, the path seems to be paved with stones taken from nearby to make it more resistant to erosion. We also see parallel paths that criss-cross, another sign of a path used by livestock.

The marks of the nature route turn off to the left but our route continues to the right. It follows a level course through the wood. When the trees clear, we can see the chaos of blocks to our right. Finally, we start to see fields again and the path comes out on a track. Below, the ruins of another corral and, shortly after, a signpost points towards the spring called Font del Bullidor. In Catalan, Bullidor means water coming out of holes in the rock but there is also a cistern with a tube from which we can refill our water bottles, if necessary. From now on, the track descends until it joins the Carretera de l’Obaga which we follow to the left to return to Mas Fred and then retrace the first section of the route back to Saldes.

Note: If you don’t want to repeat the final section of the route with the climb back to the village of Saldes, you can turn left off the main road on to the Carretera de l’Obaga after passing through the hamlet of Maçaners and park anywhere with sufficient space in between where the route joins and leaves the road.