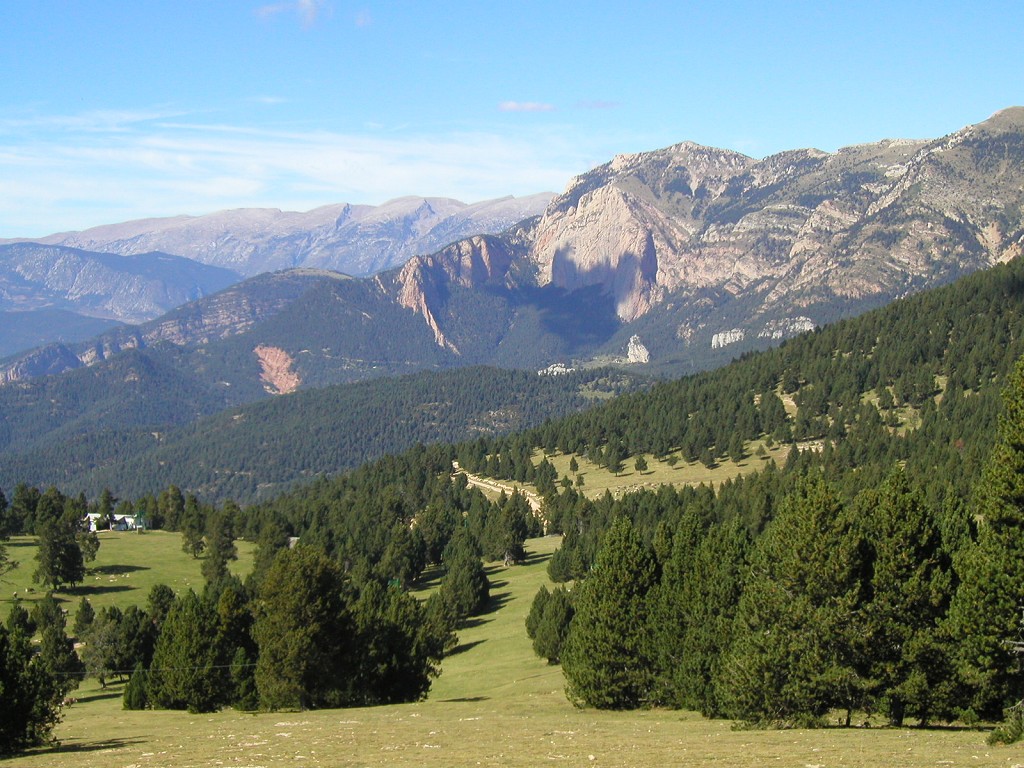 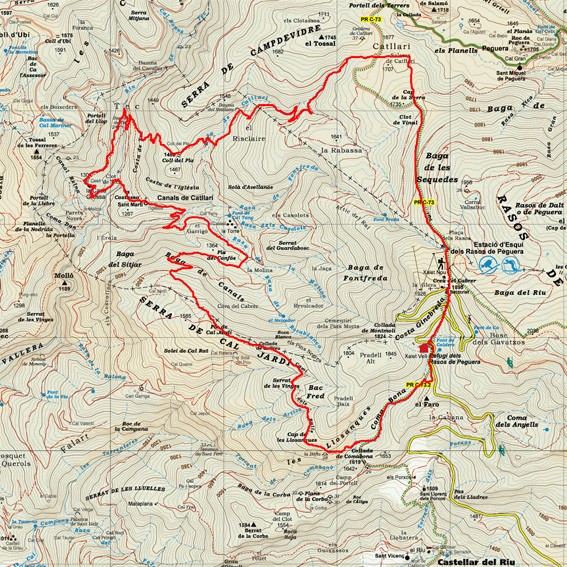 In 1908, the first outing to Rasos de Peguera was made to try a new sport: skiing. To serve the increasing popularity of this sport, in 1933 the Rasos de Peguera shelter was built following the Alpine architecture of the time. In those days, access was much more difficult than now. By car, you could only get to Campllong, and from there you had to get on foot or by mule. The current road was built in the 1970's, at the same time as the ski resort, intended for an eminently family audience. In 2004, due to the lack of snow and the difficulty in finding funding for its modernization, the station was closed. Currently, there are several snow activities in winter, especially snowshoeing.

The proposed route uses the refuge as a starting point to explore an area almost unknown to the general public but more than interesting: the Canals de Catllarí.

Description
The route starts in front of the shelter, following the road up. Follow the signs for the PR-C 73. From the beginning, cross the road where you will find a path that leads to the source of Calders; a well-arranged fountain and a good place to fill the canteen before beginning the route or to redo the effort at the end. Your itinerary leaves the road a few meters ahead and goes straight on to the Cabrer cross - where there are the old ski resorts - cutting off the sharp turns of the road. Once up, go down the forest track first until you reach a path in the middle of meadows and climb up the hill of Cap de la Serra. Here you will leave the PR marks that goes down to Peguera, to follow the yellow marks on the Berguedà trail network, which follows a trail to the west until you find the track at the Peguera pass. This stretch gives you stunning views of Ensija, you can notice a change of landscape; Instead of the black pine forest, you come across a rolling landscape, with remnants of old potato fields - today meadows -. It is a good place to find flowers in spring and summer and mushrooms in autumn.

The Coll de Peguera is one of the entrance gates to the Canals de Catllarí where you are heading. Follow the forest trail to the southwest and leave it after about 300 m, along the forest path on the left. Between the pines and beech trees, there are still a few fir trees, some of them high. The route continues down through the forest, now along old tracks, until you cross the Risclaire stream or rasa del Catllerí and climb up to the Collet del Prat or Pla. Just before reaching the pass, a low square, grassy wall, is one of the few remains of the house. Cross the fields and take the descent down a winding, undoubtedly ancient road that has been restored in recent times. Among the trees you can see the Casa Grossa, where you are heading and overlooking the whole valley.

The route crosses the Tec river. Here, by the river and near the Cavalier's Bauma, it is a good place to rest, with lots of shade in summer and with the rumble of the river water in the background. In calm water areas, Pyrenean tritons can still be seen walking along the bottom. In the cavern of the Knight, a beautiful path that goes through the woods will take you to Casa Grossa. Once in front of the house, its size is fully appreciated, the result of successive extensions.

The whole valley is an enclave of the municipality of Montmajor. Its origin goes back to the purchase of the estate to a nobleman by a merchant of Montmajor in the fourteenth century. It started out as a medieval tower - you can still see it in the northern part - which is now integrated with the rest of the house. There is also a well and the farmer's house, which was built when the owner left. The arcades bordering the south facade were a whim of the owner, which led him to ruin. In the final period of the occupation, after the Civil War, the farmer moved to the main house, with a brigade of pawns working across the valley's fields and forests.

From the house, the route goes down again to the river and up the meadows to the Romanesque church of Sant Martí de les Canals (11th-12th centuries) and the annexed house, still standing, called the Church. It is another good place to pause if you need to, before undertaking the ascent to the Serra de Cal Jardí.

As you go up the valley and the views expand, you will see the whole pot where it is located, and behind it, the Sierra de Ensija. Again, it is a good place for flora and butterflies in early summer and mushrooms in autumn. Enter beech and pine forests and the tracks and roads are now logged. You need to be attentive to the brands so you don't go astray. After passing one last turn, you come to the plain of the Cal Jardí mountain range. Follow the ridge back to the pass to the cross, where a path to the right that you have to follow is called the Camí dels Rulls. It is a long way of flanking which, after the last climbs, offers a well-deserved rest as it has virtually no slope and also passes through shaded forests. When you change the slope, the path opens by seeing the Tossals mountain range and the Lord valley. Finally, the road goes down to the Comabona pass where you will find the signs for the PR C-73. Follow it north until the end of the route. You will first climb the valley in a gentle climb and wide path under the edges of the Llosanques until you cross the Comabona stream, where the road narrows and the ascent-shortening increases, until you reach the road, almost in front of shelter.