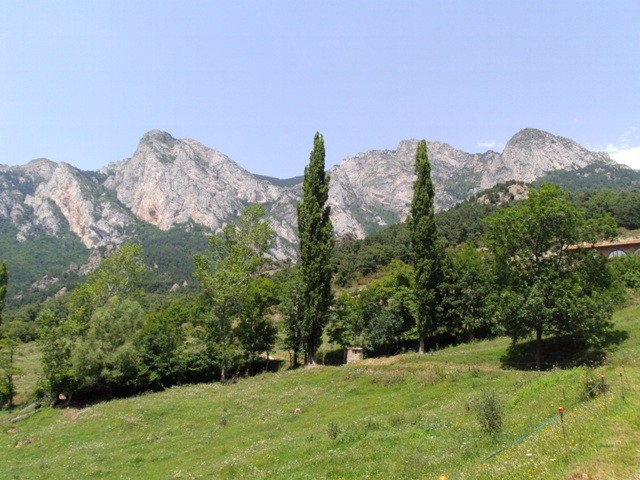 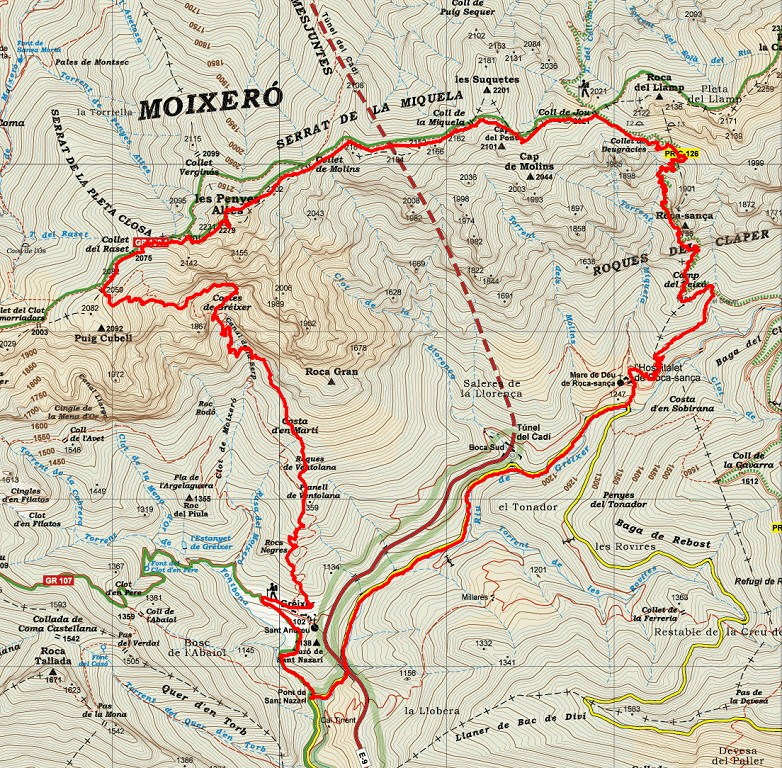 Despite the considerable height and the rigors imposed by the Cadí and the Moixeró, throughout the history, gentle steps have been found to cross these mountain ranges. The Coll de Jou has been one of the most important and most visited. This excursion allows us to ascend to the Penyes Altes de Moixeró, going down the path and returning to the Snake Channel, crossing one of the most imposing beech trees of Berguedà.

The route starts at kilometer 4 of the BV 4024 road that goes from Bagà to Coll de Pal, in the parking lot of Gréixer, just before crossing the viaduct of the C-16 below.

From here, take the same road to the north direction to kilometer 7. Here, you have to leave the road and take the path on the left that leads to the farmhouse of L'Hospitalet de Roca Sança. After passing the farmhouses, you have to climb a bit to cross a small stream and start the path of Coll de Jou. The rectangular marks of yellow color will guide us in this section of the route.

The plot of this sensational historical path is clearly evident, which is gaining a comfortable height to get to Claper's house. This place was inhabited until the middle of the 20th century. Just a few years after leaving the stables, a huge rock after the Roca-Sança slopes hit the building, sinking it to a large extent. In front of the house there is a round trough for livestock (lifting the lid can catch the clean water that arrives there).

At this point we find the yellow and white marks of the PR-C 126 that will accompany us to Coll de Jou. From here, you pass along a path to the left. Here is a small section where the old Royal Road is lost slightly but soon we will regain it again by setting it elegant and defined to save all the unevenness that is presented to you.

Soon we reach the foot of the great rocky walls of La Roca-Sança, which is a small relaxation in the strong rise. Here, it is worth it to stop to discover the multitude of crosses sculpted on the rock.

The path continues until reaching the collapse of Deugràcies. From here, the path becomes smoother until reaching the Coll de Jou. The royal path crosses the neck and enters Cerdanya through the town of Urús. Our itinerary, however, continues to the left of the neck, from the right towards the bottom, in the direction of the Miquela cliff. From the neck we will follow the white and red marks of the GR 150-1. From here, the path is narrowing, with slight ascents and descents, small necks and collets, until finding the last repeat that will take us to Peñas Altas de Moixeró, 2270 meters above sea level and from where it is They contemplate magnificent views of the Cadí, Moixeró, Cerdanya, Berguedà ...

From here, the path begins to go down resolutely to find the Raset collet in the middle of rocks that in some places will force us to help with our hands. Later, the ridge widens in the area known as the Rasets. Here, a path on the left hand leads us to the Snake Channel following a rectangular yellow markings.

The descent is direct, with steep slopes that are saved with little rungs. Highlights the contrast of vegetation as it changes altitude. First of all, the pins are the protagonists but soon they give way to an interesting beech forest, with imposing beech trees that stretch well up to find the rays of light. Further down, beech leaves give rise to oaks, booms, pine trees and, finally, in oaks.

When arriving near Gréixer a sudden change of landscape surprises. The undergrowth filled with vegetation that has accompanied us throughout the route, leaves a poor, rocky, eroded ground ... It is an area of ​​high geological interest: the riolites of Gréixer.

It is a set of outcrops of volcanic calcareous-alkaline rocks of riolithic composition that is between Gréixer and Coll de Pi (Cerdanya), on the southern slope of the Catalan Pyrenees and which is a unique set in our country, both for the nature of the rocks that emerge there as well as the structure of the outcrop. It is a volcanic lattice boiler formed during the ignimbríticas eruptions that generated the pyroclastic deposits of Castellar de N'Hug (see Geozona) and that in the last stages of its formation it was filled with riolíticas lava. This structure, from which you can see a section full east-west, had a minimum of 14 km in diameter and a depth of more than one kilometer. The outcrop conditions, in addition to the nature of the rocks found, make this geozone a geological site of special interest both on the scale of our country and on an international scale, given that these conditions of Observation and preservation occur in very few cases.

After this uniqueness, we reach the town of Gréixer, which we will skirt the right side until we find a track that will take us to the end of the route following the white and red marks of the GR 107 - Good Men Path (Camí dels Bons Homes).