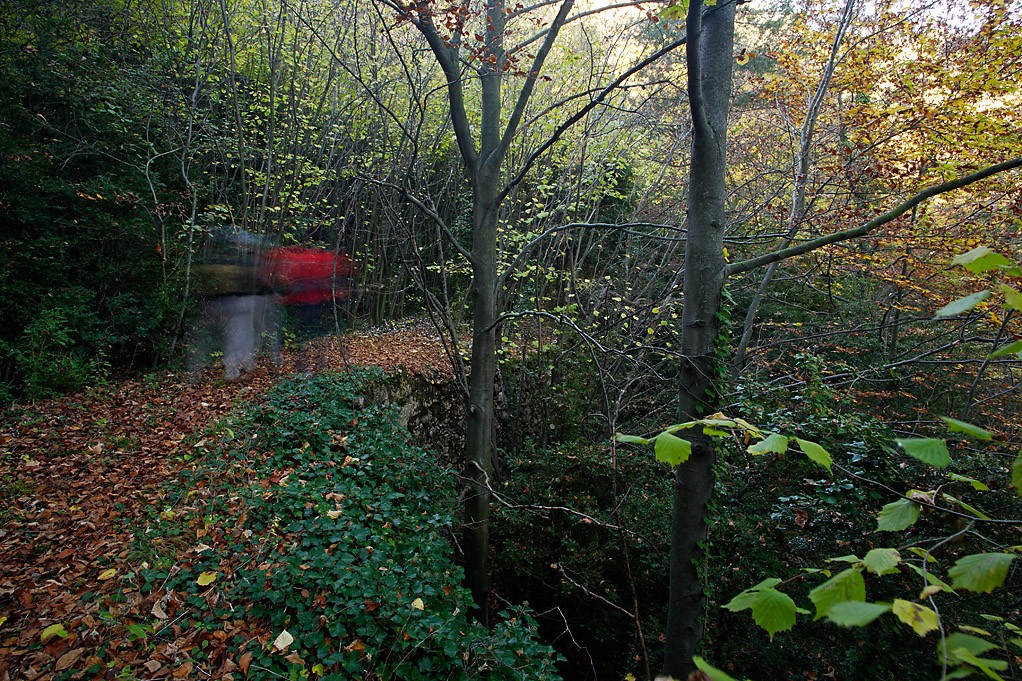 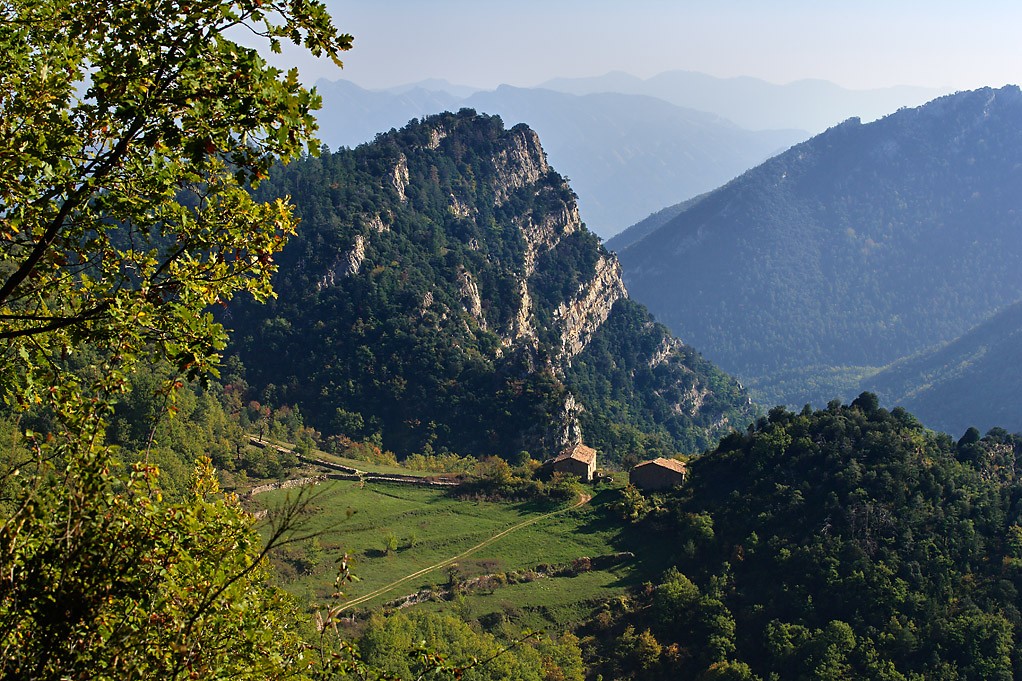 The Peguera valley is an area west of the Llobregat. The proposed route departs from the village of Sant Jordi de Cercs, built in the early 70's of the last century to replace the one of Sant Salvador de la Vedella that was under the waters of the Baells reservoir, and reaches the old mining village of Peguera. It does so by very interesting paths, both from the landscape and the architectural point of view, goes up the western slope, following the path of the planes or train of Peguera where the inclined planes were to lower the coal, and returns by the east slope of the valley largely following the horseshoe path; the contrasts are spectacular.

It is a demanding route for both the unevenness and the mileage but also has several options in the middle if you need to shorten it.

Description
The route starts behind the Sant Jordi school in Cercs, and begins following the route of the Tramvia de Sang - recently restored as a tourist route - it was the first mining train in Berguedà. A tram that, based on animal traction, as the name implies, brought coal from the Fígols mines to Berga. It is currently being paved. At a fork you have to keep straight - the one that goes down to the left will take you to the nucleus of Cercs. A few meters later you also have to leave it and continue along the track on the left, and after a descent continue on the right path that will take you to the first bridge of the Tramvia de Sang, which crosses the Peguera stream below. of the imposing remains of the pylons of the train track of Peguera-Cercs that followed the series of inclined planes that you will find on this route. This bridge allowed to save the Peguera stream at a considerable height while maintaining the desired level of elevation.

Once the stream has crossed the bridge, you have to climb the path to the right, following the upstream and leaving the Sang tram route, which runs in the left direction. Immediately you will find a track that you will follow to the right a few meters until you find a fountain. At this point you have to leave the track - where you will return to - and climb the path of the planes or train from Peguera to the left. This road will alternate sections of steep slope to save the inclined planes, and very flat sections that followed the wagons on flat foot. Then the path climbs through the shady forest of oaks, blades, maples, boxwoods and scrubs that will accompany you much of the way until the beech trees become yours, almost unique companions.

When the steep climb of this inclined plane ends, you will see the rest of the construction; is the boundary of the inclined plane number two. From here, the path plans to find the beginning of the next inclined plane. You can still see how the road, in some sections, is supported by spectacular dry stone walls, showing the important engineering work that was built to lower the Peguera coal to the Llobregat valley.

After alternating twice the sections of rise and level, you will connect with one of the variants of the Camí dels Bons Homes (GR 107.5) that arrives on the left coming from the Casanova de les Garrigues. Follow the path to the right, in the middle of the spectacular beech forest. A few meters later you will find a new fork in the paths, which if you go just in time you can use it to return to Sant Jordi along the Erola, shortening the route. To continue to Peguera, follow the GR up to the left, to the top level of the Peguera train. You will then connect with the main variant of the Camí dels Bons Homes (GR 107), which runs down the lake. You will soon find a small mine (tunnel) and shortly after a footbridge that will help you cross a small stream, another building that had been loading coal wagons. After crossing the ravine, the path climbs to the other coast and you reach La Planelleta, where you will connect with the royal road from Peguera to Cercs, where you will return. It is also a point that can be used to shorten the route without reaching Peguera.

To reach Peguera, follow the path - now track - to the left, half a kilometer where you will find another fork. The proposal is to go up the left passing through the portal and the remains of the floors, the canteen and the mines and continue up on the right bank of the Graus ravine, until you reach the cemetery in the center of Peguera. A special place that invites you to pause. The perspective of the open valley is spectacular.

To return you have to follow the track that goes down to the right to the source of Cal Coix - the old Peguera washing machine - and from there continue until the next bend, where you will leave the main track that goes up to Fumanya, and continue along the track for the right again towards the Planelleta. Now you have to follow the royal path of Peguera Cercs: first a track that narrows until it becomes a bast path that will take you down through the forest doing zigzags that descend strongly from the neck of ' Hortons. Although this slope is more solitary, the pine is predominant, you can also see some large beech. After the steep slope, the path becomes softer and you will begin to find the first beams that delimit the fields; first shows that you are approaching a farm. Pass the fork that, on the right, would lead you to the path of the plans where you went up, you will find the farmhouse and the hill of Erola.

Follow the track until you find a roundabout where you will have to leave it and continue along the horseshoe road, on the left until the Palou pass. Continuing along the track would also shorten a section of the route passing the house of Vallobrega and connecting with the route before crossing the stream of Peguera. If you follow the Horseshoe Road, you will come to the pass where the path has again been swallowed up by a track. Here you have the option of returning to Sant Jordi for the chapel, but the proposal is to go down the track on the right to Cal Torner and from here to find again the stream of Peguera to cross. Following all the time the track will reach the point where you have started the path that goes up to the planes, in the first leg.

From here you will only have to undo the path you made to the inci, going down to the Sang tram and following it, now towards Sant Jordi de Cercs.