From l'Ametlla to the Merola castle 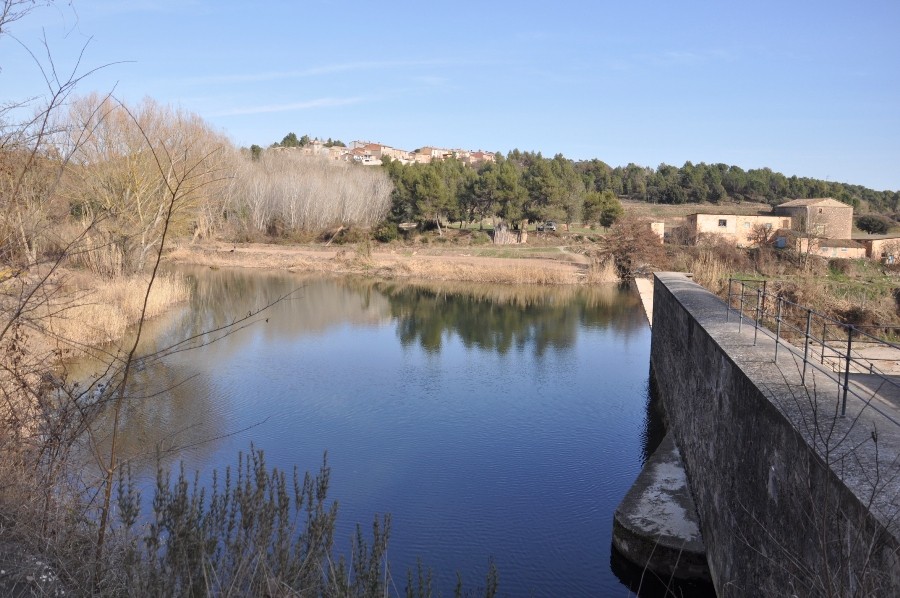 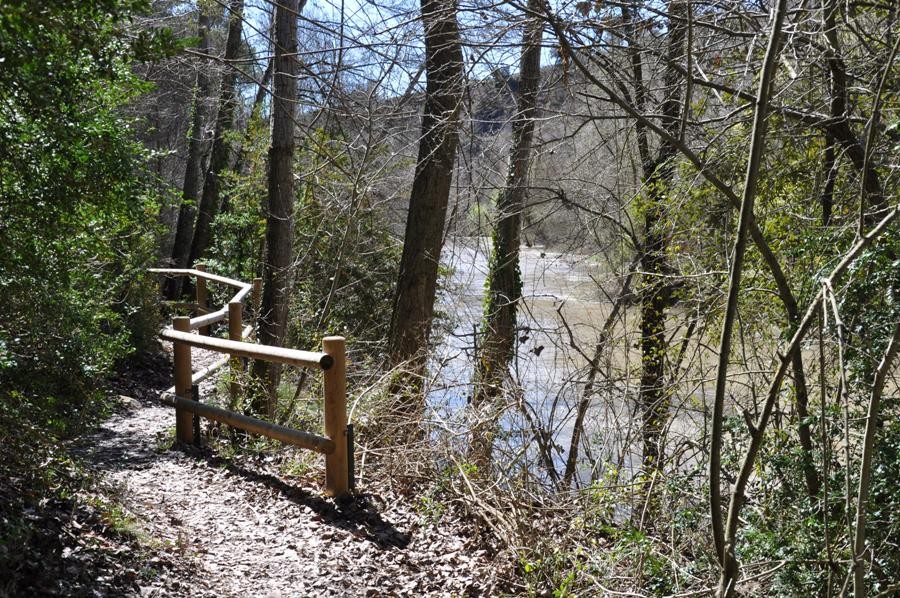 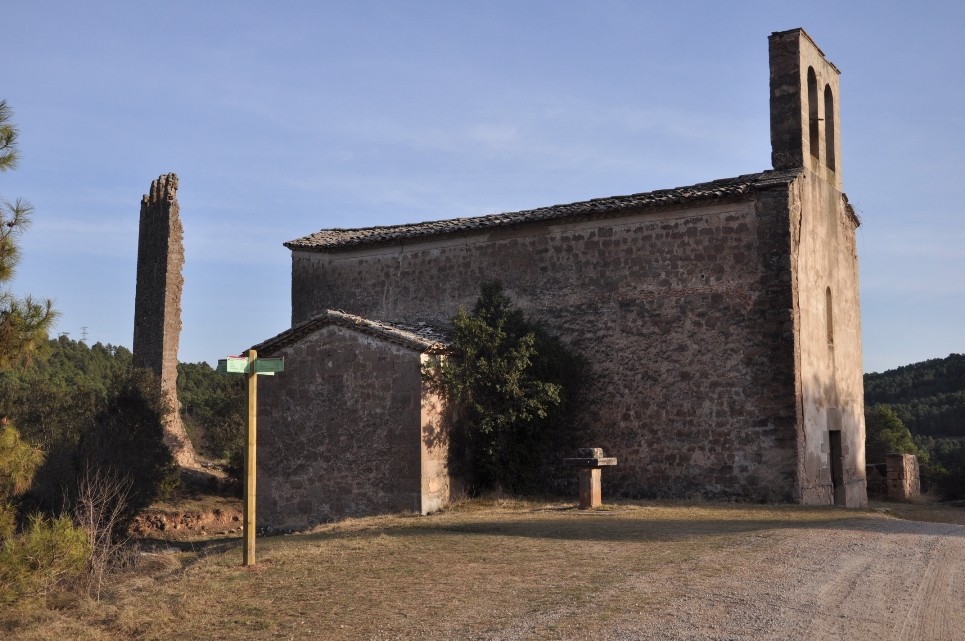 This itinerary allows you to discover unknown places in the municipality of Puig-reig. The church of Merola and the remains of its castle are located in a forest area very close to the stream of the same name. If you access from the textile colony of l'Ametlla de Merola along the royal road that led there to Viver i Serruita. On the way back, you will have to follow the Llobregat from the junction with the Riera de Merlès crossing one of the well-preserved shores of the Route of the Colonies and the Camí del Llobregat.

Description
You leave the Ametlla de Merola car park to the left where you will find the signpost for the Berguedà road network. It is necessary to follow the yellow markings of the Camí ral de l'Ametlla a Viver that leave the colony along the path parallel to the canal. This first section is very flat and pleasant, it passes by the side of the lever without crossing it, and later on the lock. At the end of a field, the road climbs to cross the C-16 motorway via an underpass. Immediately you will find the old road that you also have to cross and continue along the track to the north that continues to gain height in the direction of Alzina de Merola.

The path goes between the house and the cutlery and continues going up north. After a few meters when the main road makes a closed bend, continue on the right. After passing some fields, the path enters the valley of a stream and flattens as it enters a forest area. As you go along the path you will be able to distinguish the remains of the Merola Castle tower from where you are heading. The path turns into a path that runs around fields and ends at another path, finally lowering and crossing a small stream before reaching the main track. Continue left to climb gently. When you reach the access road to Merola, just in front of the ruins of the old farmhouse and the tower that is standing up in part of the castle of Merola, you must also go up to the left to skirt above where it is the church of Santa Maria de Merola.

The site of Merola is documented as far back as the 9th century. From the mid-eleventh century it has been reported that the Merola family, vicars of the castle of Puig-reig, who owned the valley of the stream of Merola and had important land lots in the lower Berguedà. In the 12th century, the importance of the family increased. Located at a crossroads, Merola Castle was a real watchtower on the Camí Real de Manresa in Berga, at the same time protecting the southern border of Berga County. Only the Tramuntana wall (4.94 m long) and some remnants of the eastern tower remain from the tower that is partially preserved from the old castle. It was an almost square floor plan consisting of three levels. The first two were covered with vaults (of which the boot is still visible) and the upper with wood. The tower is crowned with battlement.

The church was built near the tower of the old Merola castle and at the foot of the Merola road, in a more prominent place, after the old parish church of Santa Maria (Romanesque) was abandoned in 1609 due to its sorry state of conservation. The main altar was dedicated to St. Mary and the secondary was to St. John. The work is one of the few examples of Renaissance architecture in the Berguedà region.

To resume the way back, go down the side of the church through a small path that ends at the track, just before the bridge of the s. XVIII that crosses the stream. From here the track gradually gains height until you reach the Merola Cross, which indicates an old important crossroads. The pedestal, made of a cubic block of stone, has been preserved on a wider square floor base. From the pedestal comes the base of the column or cross, of circular section, which is broken.

From here, follow the track that goes down to the motorway. Follow the direction of l'Ametlla de Merola down to the bus stop at Cal Riera. An underpass crosses the motorway and accesses the colony on an asphalt road. The colony of Cal Riera, also known as Colonia Manent, was built between the end of the 19th and the beginning of the 20th centuries, in 1895 the factory was already operational and the first houses in 1905. The factory operated until the 1970's. . XX when most of the inhabitants of the colony left.

You pass near the Torre del Amo and descend to the factory, from where a path comes out that allows you to access the lever and cross the river Llobregat. On the other side of the river you will find the Camí del Llobregat (GR 270) and the Route of the Colonies, which you must follow south towards l'Ametlla de Merola. A few meters away a small footbridge facilitates crossing the Riera de Merlès without getting wet. The Merlès stream is one of the most important tributaries of the Llobregat as it passes through the Berguedà.

The path continues along a path on the right that enters the riverbank forest, advancing near the river. It is a good place to listen to birds and if you are lucky to see some. The path continues downstream, interspersed with a wider stretch of road, never leaving the shade of the riparian forest. Finally, the path takes off to reach an asphalted track. You have to follow it only 100 meters to the right, then a track to the right will bring you closer to the river through an area of ​​orchards. You will again see the lock of the Merola Almond but now on the other side of the river. You will pass by Cal Melic and cross the lever to re-enter the colony.

The GR chooses once to reach the track, following it straight up at the beginning of the route. If you have time you can go around the road that borders the meander next to the orchards and will go out to the factory.

Before taking the car it is also advisable - if you have not done so before starting it - to take a tour of this textile colony, which was built by a Maresme industrialist, who explains that all white has this air to coastal town.