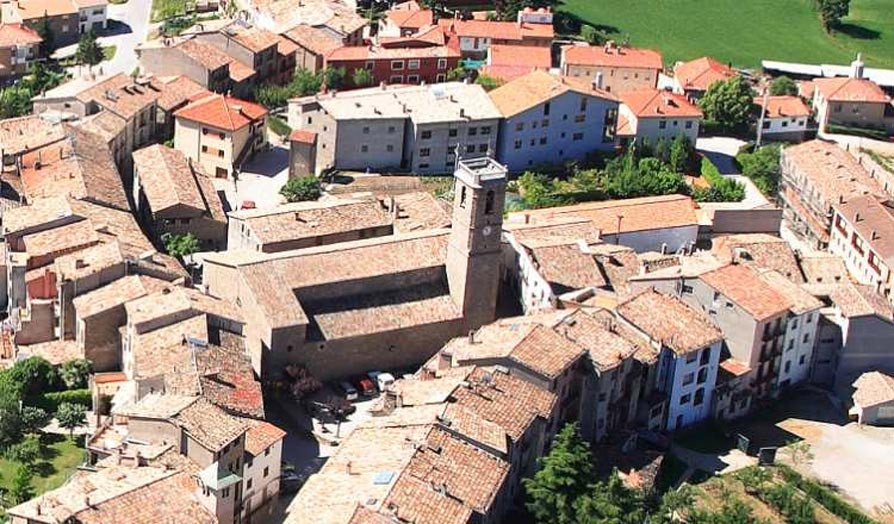 This excursion proposes an ascent to the highest peak of the Serra del Picancel: Salga Aguda. A first stretch of path through pine forests, with humid gulls filled with boxwood, and some oak, beech and blades that give the color change throughout the year. Some viewpoint opens onto the northern slope. Arriving in Salga (house in rubble), the route changes completely, with a much more open and demanding path, with spectacular views to the climax of the summit of Salga Aguda where to enjoy a 360º panoramic view. The return is on the same path, but in the opposite direction, it will give you new perspectives on the same landscape.

Description
The route starts at the church square of Borredà and continues along Manresa street to the south, following the GR 241 markings. It goes down the stairs to the left of the Vinyal descent to the road, which cross and continue along the ridge to the right. After the last house on this left side of the road, continue along the road that descends to the left and will soon become narrow as a path. You will come to a track, on the left is the Pont de Sant Joan, which will allow you to cross the Mergançol. There was also a mill built by the paraires and wool weavers of Sant Joan, which was the first guild mill, erected at the end of the s. XVII, of which only remains of walls are preserved. In addition to being a cattle mill, he was also a flour mill, and in order to be able to do these two functions, masses were adapted that, by using the water directly from the irrigation system, could soften the wool and then redirect it to the spinning wheel. grind the flour. The mill was the subject of a long lawsuit that confronted the Gremi and the Font family, which finally forced the Gremi to build a new one a few kilometers downstream in the direction of Vilada, the mill of Font.

The path goes south and soon you will find the Oratory of Sant Joan. Continue uphill towards the Grays rocky area where the path has opened to the rock. Before starting a steep slope, there is a fork of paths, you must follow the one on the right, the other goes up to the Fonteuler pass. After the steep climb, you will come to a forest track that you must follow about 150 m to the right. At this point you should stop following the GR 241 which continues along the path on the left. Continue on the forest track (from here you will not find any markings on the ground, only some milestones later). The track descends until you reach a point where after a small turn you will make the first bend with wide views of the entire northern area. You will begin to see the whole area of ​​Catllaràs and even if the day accompanies to the summit of Puigmal. You will go down a little and link to another track that comes from the right. Continue to the left. The slope is positive again and gradually you will be gaining height, you will find a new point with good views already more focused to the northwest, and soon you will arrive at the Fountain of the Wolf, which tends to fall and where you can therefore cool off. . Continue until the next bend and shortly after you have to leave the track and continue on the path on the right that will take you to the Coll de la Creu de Salga. From this small hill, continue on the path to the right and you will soon be in Salga. An old farmhouse now in rubble shelters this lonely area. Behind the house there are some levels and a viewpoint opens from where you can already see well the entire southern part of the Sierra de Picancel, as well as the whole of the Quar and the Portella cliff, and beyond the Depression. Central and the Prelitoral Range.

From here the path is more exposed and has some section of climb; If you are not motivated by this part, there is the option of returning from here, having already savored some splendid views. If you want to continue to the summit, exercise extreme caution, especially if the terrain is damp. Continue along the road that continues to the west, turning the raft and reaching a point with good views of the village of Vilada to the northwest. You will pass the summit of the Serrat dels Teixons and continue along the ridge marked with milestones to the left. Here you need to be alert and not to be confused with a fast descending path. You will arrive at the Coll de la Portalleta. Continue climbing the rock and some small stretch of forest. Once you reach the summit of Salga Aguda, if the day goes by just open your eyes and enjoy this fantastic 360º panorama at your feet.

To return, you just have to undo the road to Borredà. Although going the same way you will see how to do it in the opposite direction, it brings new and interesting perspectives on the same landscape.