To Queralt along the shady side 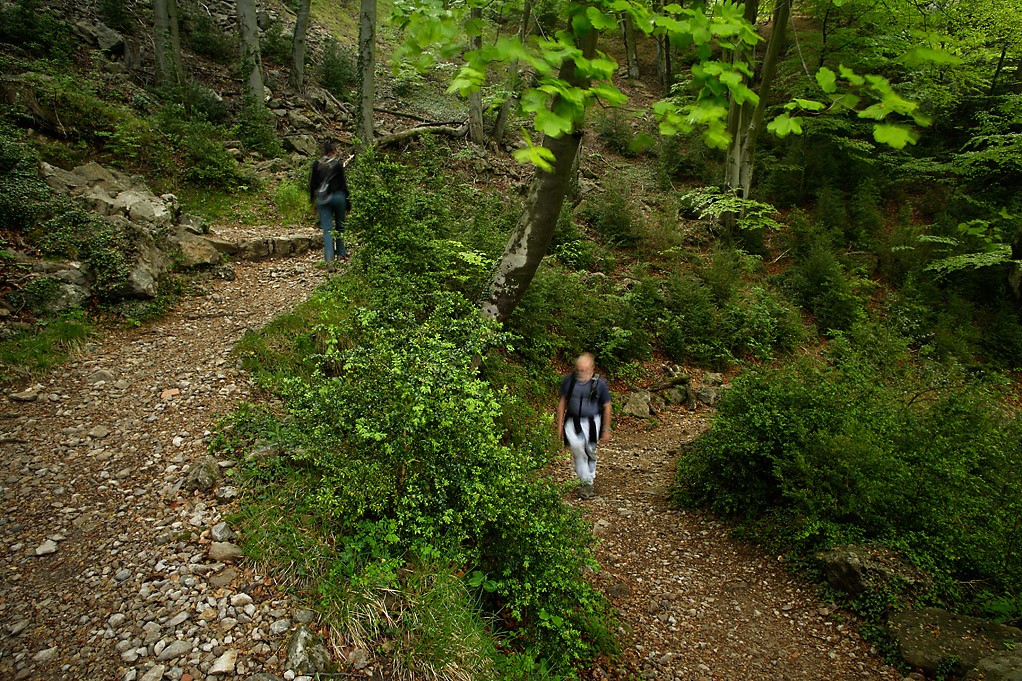 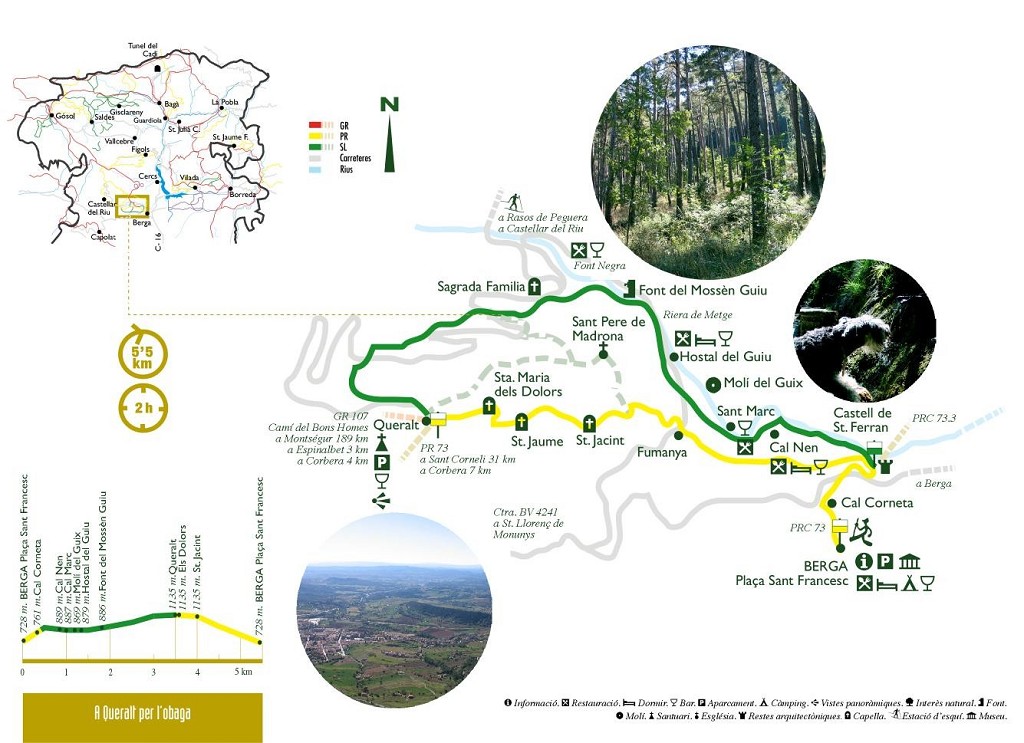 The Metge torrent played a key role in the industrialisation of Berga during the 18 th and 19 th centuries. Even though there have been references in documents of the existence of mills from the Middle Ages, the boom began when part of the waters of the torrent was diverted to the town centre and the sharp change in elevation was used to install factories and mills using hydraulic power (later replaced by electricity) to operate the machines.

The first part of this route allows you to explore the upper section of this industrial exploitation, and the second part goes right into the first spurs of the Queralt ranges.

Just before you reach the Sant Llorenç road below, beside a pipe carrying what remains of the torrent after the drinking water is collected, you will see a structure that looks like a reinforcement of the wall of the road. This is the remains of the aqueduct that carried water to the former Alon mill in front, which no longer exists as such and has been replaced by a house.

The waymarks of the PR cross the road, take the Queralt shortcut, but go left after the chapel. Keep going uphill along the narrow road, following the local paths's white and green marks. The next building you come to is the Franquesa factory. Today, it is a series of semi-abandoned dwellings. It was a textile factory from 1881 until it was abandoned as an industry during the Civil War.

A little further up, you will see a kind of bridge that was the aqueduct and the water chute for the Lluís Ne factory. The empty plot on the right of the road is part of the factory site, although in its day it was a much larger building that went beyond the aqueduct. Below you can see the milldam of the Franquesa factory. This factory was built in the second half of the 19 th century and operated as a textile factory until it was also burned down during the Civil War. It was eventually demolished in 1986 as there was a danger of it collapsing. The old factory cistern was located at the site of the current car park of the Cal Nen restaurant.

You will soon see the old Garrigà factory, an imposing building, half in ruins, on the other side of the stream. It was built at the end of the 19 th century as a textile factory and burned down like so many other industries in 1939, but was restored and kept working until 1950. The house below is the Baró mill, currently a house but once a flour mill documented since 1791.

A hundred metres past the Sant Marc restaurant, there is a path on the right that leads to some ruins, which is the Guix mill and you can still see the water spout. It became inactive after the construction of the Garrigà factory, as this factory built a new canal that left it without water. It was a cement and chalk mill.

When you reach the Queralt road, you will see the last building in the stream area that was the Bofarull mill, today the Hostal del Guiu. From the end of the 19 th century, it operated as a cement mill and small power station until it was renovated as a guesthouse in 1949. From the road you can still see the canal and the weir.

From here on the landscape is the main feature. The waymarks go to the left along a small path. If you need water, a little further up there is a small bridge that crosses the stream and a spring: this is the Mossèn Guiu spring. It is a very pleasant place to rest and cool down. From the spring emerges a path to the left that links with the sign-posted path.

You will come out onto Queralt road in front of the Sagrada Família hermitage. Cross the road and go alongside the hermitage, then cross it again and go up through the woods right until you are above first bend. Here, turn off a local path that follows the road to the left toward Sant Pere de Madrona and take a local path that crosses the road and continues along. Soon you reach a paved path. Follow it to the right. Very soon you will need to follow a track that starts with some steps on the left-hand side. Cross the road again and take the path that will lead you down below the Queralt car park. This path takes you through an interesting beech grove. Once you reach the road, follow it until you reach the sanctuary.

To return to Berga, follow the yellow and white waymarks of the PR C-73, until Sant Francesc square. It's well worth making the descent at your leisure to enjoy the panoramic views. There are some interesting views of L'Estret and of Hostal del Guiu, especially at the last ridge past the housing estate.