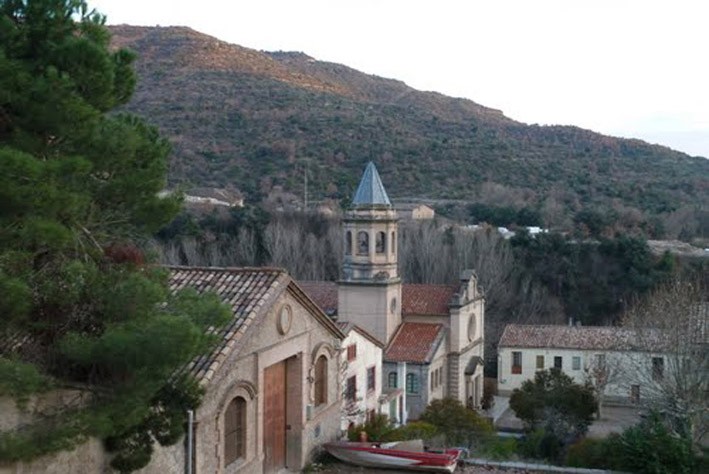 The Cal Prat Colony, is part of the municipality of Puig-Reig, and is located 1 km from the village.

The origins and development of the colony of Cal Prat have as protagonist the figure of Theodore Prat, an industrial from Sallent (Bages) that bought, in 1870, the land where then built a factory of yarn and cotton fabrics . Later, the colony was expanded with the construction of workers houses and the owners commissioned also the build of a church and a house for his private use.

The proximity of the town meant that many people who did not live in apartments built in the colony, but in the town, Works in the factory.  Despite this labor that did not live near the factory, Cal Prat, gradually also provides various services and facilities for use by employees.

Beside the road to Berga Cal Prat own his train station from 1885, and there was a street with a shop and two pubs. A Street where, despite being outside of the goal of the colony, workers also lived. Entering the space of the original colony and after passing through the portal, there was the New Street, the first that had  water. At the entrance to the square of the colony was the guest and barbershop. Closing the square, there was the church, the house of the owner, the House of the teacher, the school, the bakery and the rectory.

Unlike most Berguedà textile colonies, where the majority of workers came in early twentieth century from the countryside, in Cal Prat, since 1905, only 37% of the workers came from rural areas. Most were workers from the town of Puig-Reig or people with experience in other colonies or factories.

Cal Prat factory remained active until the nineties years of the twentieth century, but the industrial model of colony gradually was losing before the economic crisis.

The old factory,  the church, the House of the owner, the house of the director (currently the headquarters of the Polyphonic  Orchestra of Puig-Reig) and the path along the river.