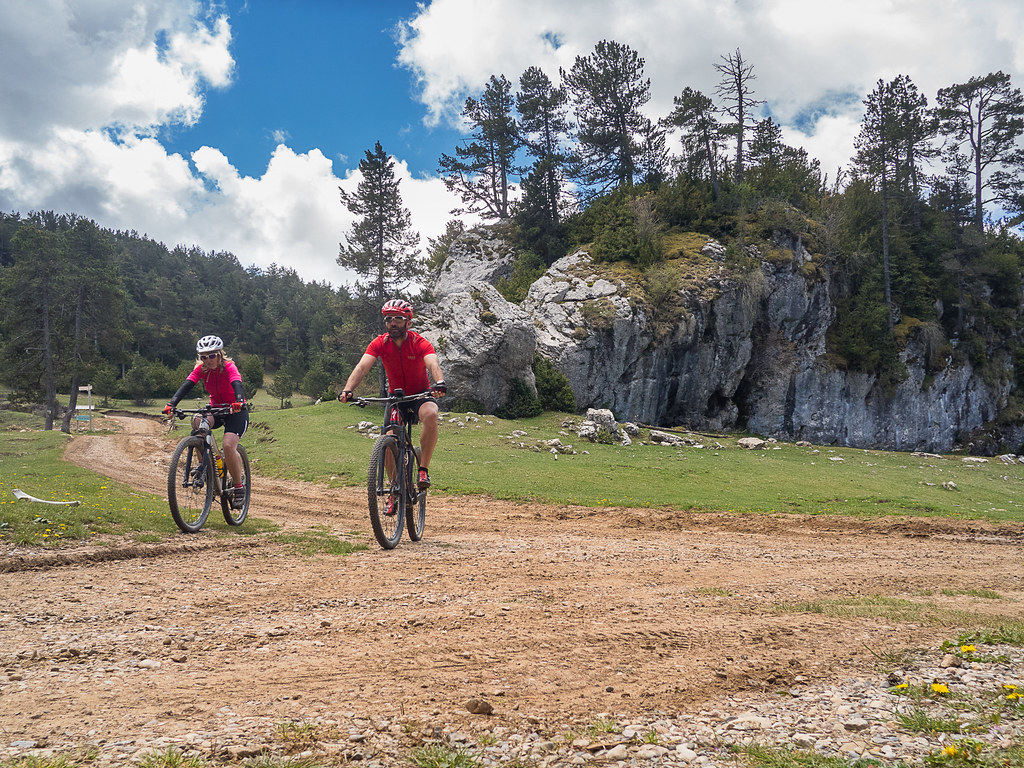 Catllaràs is a huge massif not very well-known Berguedà. With a small population (there are very few farmhouses) and a small network of roads that crosses it, Catllaràs has remained relatively isolated from the hand of man for centuries. Relatively because although there have been some mining areas, logging areas and extensive pastures for livestock, there have been no industries, no huge farms, not even crop fields except the lower areas, leaving the massif practically virgin throughout history. In addition, the few surrounding villages are small and have little impact on the territory.

This route runs along the southern slope of Catllaràs, between two of the small villages, which today survive mainly thanks to tourism and their second homes.

The route starts descending from the Castell de l'Areny along the asphalted track that accesses it from Vilada, at almost 1.5 km, breaking right on a good dirt road at the foot of a small pond. 1.5 km above, the track joins the one from Vilada, continuing in the same direction, in the direction of Sant Romà de la Clusa. The climb is magnificent, passing through the Pas de l'Escalell (where the stream is closed), the area of ​​the Font de l'Avet and, after leaving some secondary roads that make way to some farms and houses (El Clot, Rossinyol ...) the route arrives at Sant Romà de la Clusa.

This magnificent Romanesque church (11th century) is well preserved - restored in the 60's - with a small apse and a proportionately long nave. Next to it is the cozy farmhouse - currently the hostel / refuge - in a perfect state of conservation, in a fantastic place.

From Sant Romà there are several roads; north, towards La Pobla de Lillet; to the east - on the other side of the farmhouse - to Sant Jaume de Frontanyà and to the west - where it follows the route - to Roc de la Clusa and Sant Julià de Cerdanyola. The ascent - recently cemented - is very steep and the slope is important until reaching a small viewpoint (a roundabout) on the left, with magnificent views of the Sovrepuny, the Rocks of Picamill and further to the right the Coll de la Plana and the Serra de Fulleracs ...

But the route continues to ascend, as soon as you cross a stream, along a track that goes to the right. After passing the source of Cabanelles, the route zigzags, leaving the house on the right (Cabanelles, used as a shed for livestock) and then climbing a path on the left that rises strongly. Two turns further on, the route reaches the Coll de Sant Miquel, with the small wooden chapel on the left of a pine tree. Some paths emerge on either side but the route crosses the gate for livestock and continues along the main path on the right, in an area of ​​usual fangueras (and leaving behind a wide track that goes down to Sant Julià de Cerdanyola).

The small plain that crosses (Pla de la Clusa) for about 700 meters before reaching the Coll de la Clusa was a common area and protected from the Gall Fer, although recently there have been huge forestry operations modifying the whole environment. The path to follow is the good one, planning gently turning left until you reach the aforementioned pass.

You have to turn right and 350 meters further on, the route reaches the emblematic Roc del Catllaràs at a crossroads. On the right, next to the Roc, go down a path to Sant Romà (much more right). To the left the track leads to Vilada. The route follows the straightest path, after passing a gate for livestock entering a protected area by horses (Miranda Foundation). Following the main track, through a field often often muddy, immediately lowered between extensive pastures, observing a farmhouse (El Pla de l'Orri) far to the bottom to the right. Suddenly the track makes a closed turn of almost 360º - in the direction of the farmhouse - while the route continues along a not too wide path that goes up to Coll Pan. From now on, the route will always be to the east, raising the Catllaràs. So, 500 meters further on, the route departs from a thick forest, and when you open a large pasture (El Cortal del Pla de l'Orri), continue on a path that runs through the meadows in a wonderful environment. , of extraordinary beauty, until the route goes out into a small forest and connecting, to the left, with a GR.

The path passes an impressive rocky pass (Collada de Grau Pedrís), with a cliff on either side climbing towards Puiglluent. However, as soon as the route starts to climb, you have to be on the lookout for the left-hand wire, where there is a gate, to cross it and continue to the left, entering a beautiful forest of black pine. Always following the GR markings, the path makes a slight descent to enter a second meadow with a spin on the left that ridge. You have to go to the right, crossing a small rocky section to leave, always following the signposted path, to a small grove where, finally, there is a gateway to exit on the spinning side. The track goes straight down the middle of the meadows (Pla Fondo de Dalt), always following the GR, which after a sharp descent reaches a second meadow (Pla Fondo de Baix). At the bottom of the meadow, following a Canadian gate (a grid located on the ground so that livestock does not cross), several paths are observed on both sides. Here the route can be a losing hair; it is safest to follow exactly the GR signs to the east, which first cross over but parallel to the prolongation of the Canadian fence, then cross the other side leaving a path, always towards to the west. Here begins one of the most beautiful stretches of Catllassos, up the Sierra de Beig-i-Branca, always following the GR markings passing through beech forests, black pine and boxwood. At some point you have to leave the GR on a timely basis and follow the path (path) that always goes over the ridge and, finally, after a small beech forest (the environment is of spectacular beauty), goes out on a path with a steep descent of stones, which tends to a small pass: Collet de la Creu Melosa.

Until here - and from the Coll Pan - the route has always continued in an easterly direction and up the highest part of the Massif of the Catllassos between magnificent forests of black pine, meadows and wonderful beech forests. But after passing the pass, you have to turn right to the south, leaving the road that goes east. About 300 meters further down, you have to turn left onto a track that goes up slightly but then goes down, leaving small paths open for firewood ... The landscapes will change as the route goes around. a pine forest until 2,850 km further on it reaches a small plain, which climbs to the left bank of the path. It is worth leaving the path to go to the highest point of the plain, where there is a large cross (Les Forques) with an impressive view of Sant Jaume de Frontanyà. Back on the track, past a house (Frontanyà), the route continues along the left path to a crossroads (500 m. Beyond a large reservoir). On the left the asphalted track descends to the Sant Jaume road (just over a kilometer away, a good option if you want to go for a bite or visit the small town and the magnificent Romanesque church of enormous dimensions). Straight ahead, the tarmac leads to the Sanctuary of Our Lady of the Oms, now also the home of the Colonies. But the route continues along the path on the right, leaving other secondary paths (such as the one that rises on the right bank, 50 meters further on) until 1.5 km, when the track goes straight to some houses which you can see on the left (Les Lloberes), turn left to a large plain with large fangs and lots of paths. The route continues for the second most to the right, which then closes to the bottom of the valley, leaving other paths on the left.

Behind the river are the remains of an old mill (Molí de Cortines) and beams above it, the remains of a ruined farmhouse (Cortines). Above, the ruins of another farmhouse (Cosp) which, together with other scattered farmhouses, shared the church of Sant Julià de Cosp (very hidden and a kilometer away by a small path, and impossible to do in Btt).

But the route continues downstream, always following the main road on the right and leaving all the roads that appear on the left until reaching Camp-rubí, about 2 km. beyond, a magnificent farmhouse in a beautiful setting.

The route continues down to another farm (Soldevila), where it makes a very closed turn to take the path to the right that goes straight up towards Mas de la Rota, turning left past the creek. In less than a kilometer (leaving some access to farms and houses around) the main track is to the Coll de la Coma, where the asphalt begins. The route continues on the asphalt, leaving a spring (there is a large tank above) on the right, to reach Castell de l'Areny.