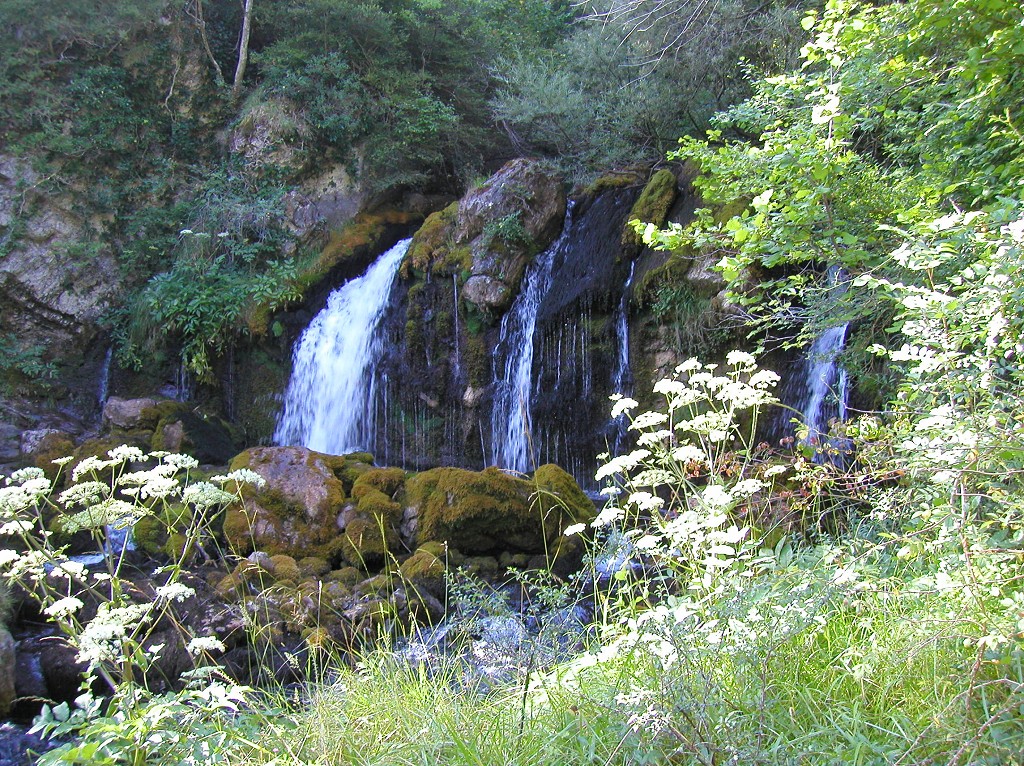 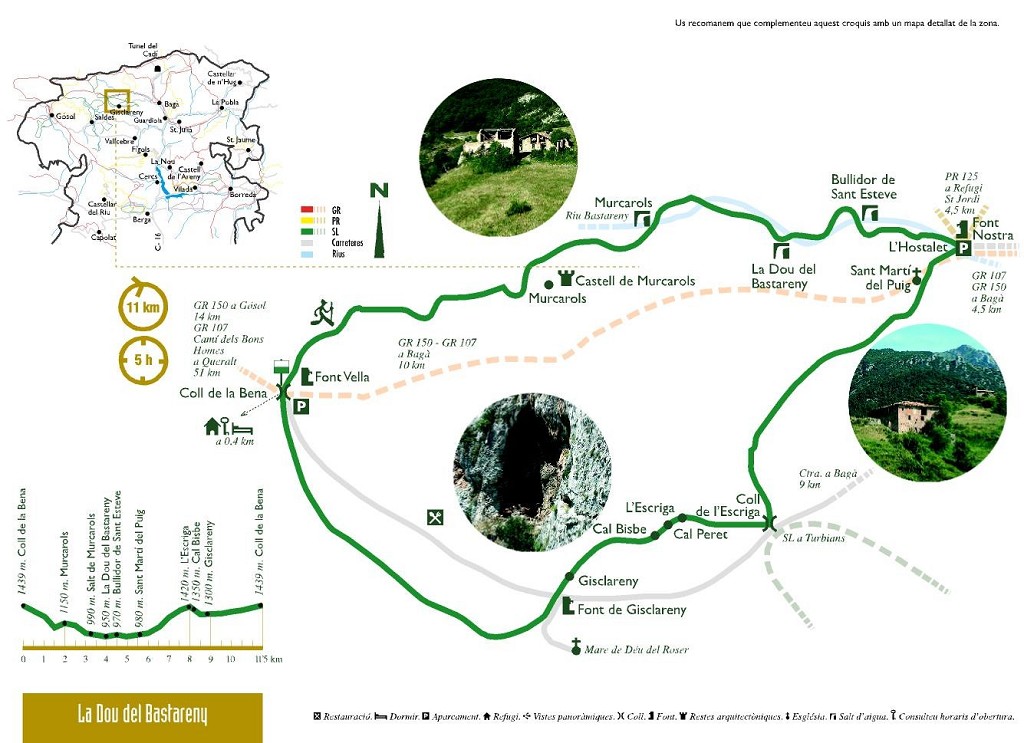 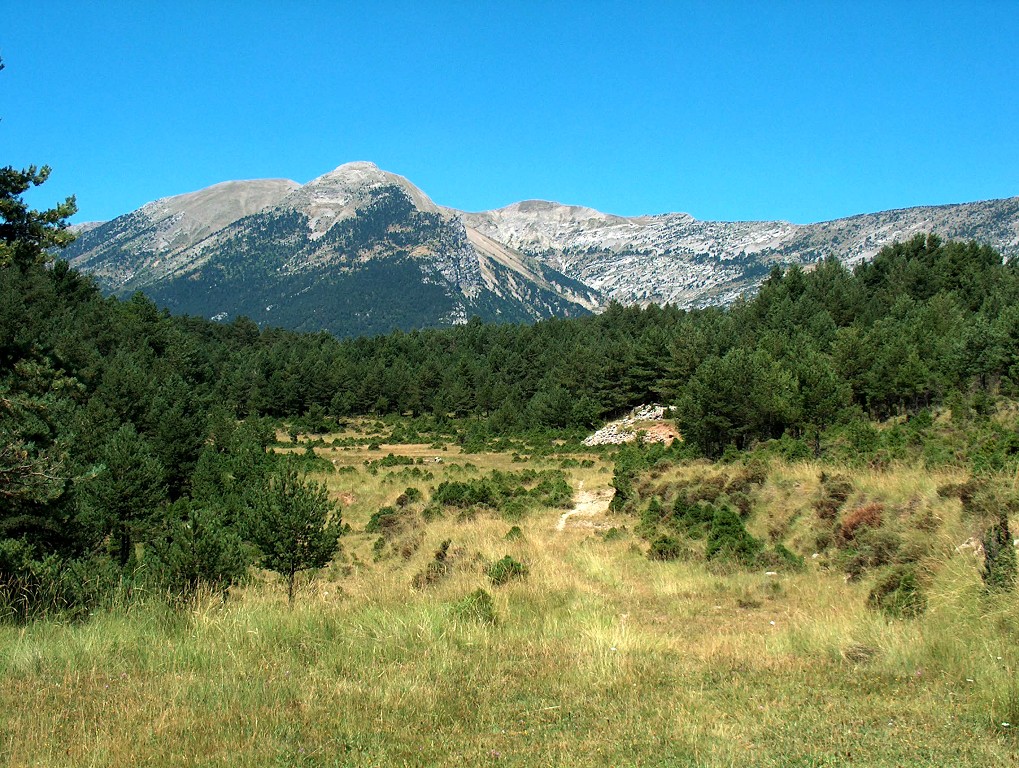 Gisclareny is a municipality with a scattered population. By the middle of the nineteenth century there were about 120 farmhouses spread over its territory, most of them in great poverty. Hikers in the early twentieth century agree to describe the village as a place where misery reigned, with subsistence agriculture in stony fields. However, they all talked about the beauty of the Bastareny valley and the houses there. This route crosses some of the communication routes between the houses of the valley, today all abandoned, and the nucleus of the municipality, in a setting of great scenic beauty within the natural park of the Cadí-Moixeró.

Returning to the house of Puig, follow the track until the next junction of tracks, where you have to climb the path that goes up the ridge to Coll de Escriga, with some sections now converted to forestry. When you are at the pass, without reaching the road, follow the track on the right that goes through the forest and in a less accentuated way, it goes up to a meadow where the landscape changes. You are over the neighborhood of Berta and in the background is the majestic Pedraforca massif. When you cross the meadow, you will see piles of stones scattered throughout. They are not there by accident but have been piled up year after year to keep the fields clean. When you see these piles of stones it is an unmistakable sign that there were former fields. To the right of the meadow, half hidden in the woods, is the house of Escriga and just before going down, behind the signposts, are the ruins of Cal Peret, crushed by huge stones detached from the limestone wall . When descending you need to be careful as loose stones abound in the middle of the road and it is easy to fall.

After about 100 meters down, the road divides. The signposted route continues to the left, but if you follow the path that goes straight, you will turn a rock and you will see a huge cavity: Cal Bisbe, a formerly inhabited cave. You can still see some stones from the walls and the traces of the smoke on the rock walls. It was abandoned in the second half of the 19th century and now serves as a shelter for goats.

Keep going down and you will pass the first houses in the Berta district, cross the road and a path will take you to the recreational area of ​​the Gisclareny fountain; a good place to rest for a while and refill the bins, if needed. Continue on the road that goes up to the village, and in a closed bend, continue straight on along the track towards Coll de la Bena. But before that, if you have time it is worth going up to the church and the district of El Roser, which you will see above the hill. The church is documented from the s. XIV as a church in the castle of Gisclareny, because the parish was the neighboring church of St. Miquel de Turbians. The medieval construction was replaced at the end of the s. 17th or early 18th century for the current Baroque building.

The track continues skirting pastures until reaching the scattered district of Coll de la Bena. Follow the track to the right and once on the tarmac, follow it to the left. You are at an important crossroads, you must continue towards the Bastareny valley, on the path that goes down to the right. Follow the same path as the Camí dels Bons Homes (GR 107) and GR 150 meters. The path will soon take you to the Font Vella, a beautiful place and a good opportunity to refill or refresh. Soon, the GRs are on the right and you have to follow the left until you find a track that, without leaving it, will take you to Murcurols; another of the great farmhouses in the valley. The house is documented since the Middle Ages, although the current structure is of modern age, but a set of additions are clearly visible. The northern face, dating to the medieval period (12th-13th centuries), could be part of a church. Already in documents of the s. XII also speaks of a castle in this place, in the ridge to the east there are some remains that could be part, but in any case it is totally devastated. This is an excellent place to enjoy the view, which extends from the Bauma pass to the west, Tancalaporta, the Moixa mountain range, the Moixeró, and the Cortalets pass below Tancalaporta, to the Vimboca hole opposite. and the Stones a little further east. On the opposite side of the mountain, there is an unmistakable depression of the terrain, wide above and narrow below. It is the Chamber of the Bocs where lambs were closed after mating so that they would not disturb the sheep and the young.

You will exit on a track that will have to follow to the right. Shortly afterwards, you will pass underneath the house of Monnell or Molnell, another of the large farms in the area that if you pay attention you will see on the way down. This one is documented from the s. XIV and for a time they dominated and exploded the headwaters of the Bastareny river. Continue on the main track and after crossing the waters of the Bastareny through the Monnell bridge, you can climb the well-marked path to the Dou del Bastareny. The leap is photographed on countless postcards.

At the exit of the stream, it seems that a flour mill had been later converted into a sawmill. In the early twentieth century, when it was a sawmill, logs were transported by cable car to Bagà.