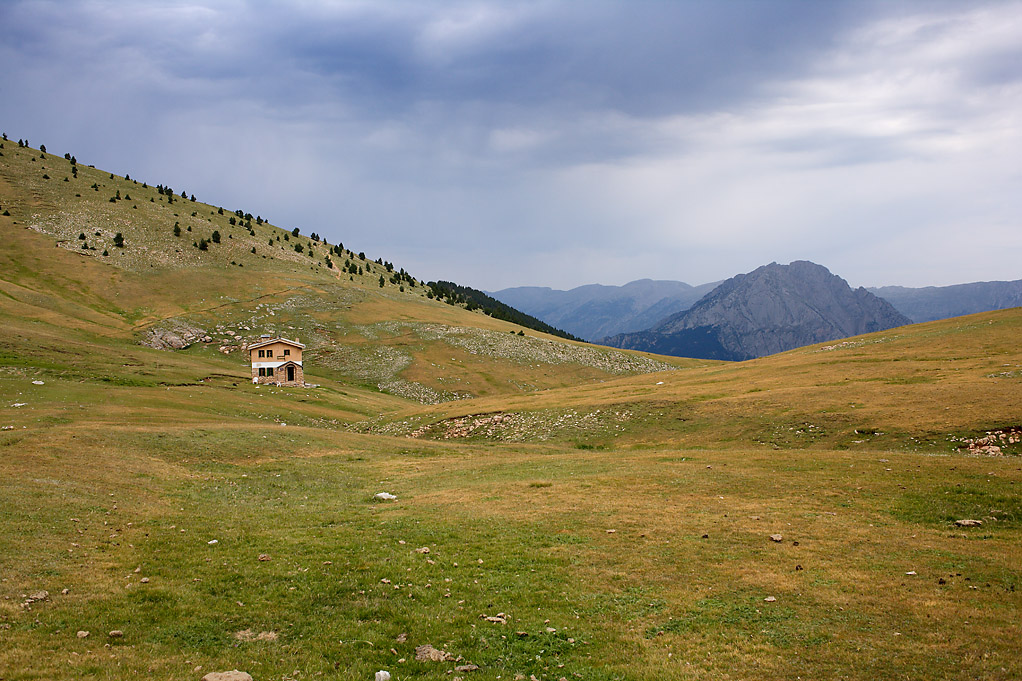 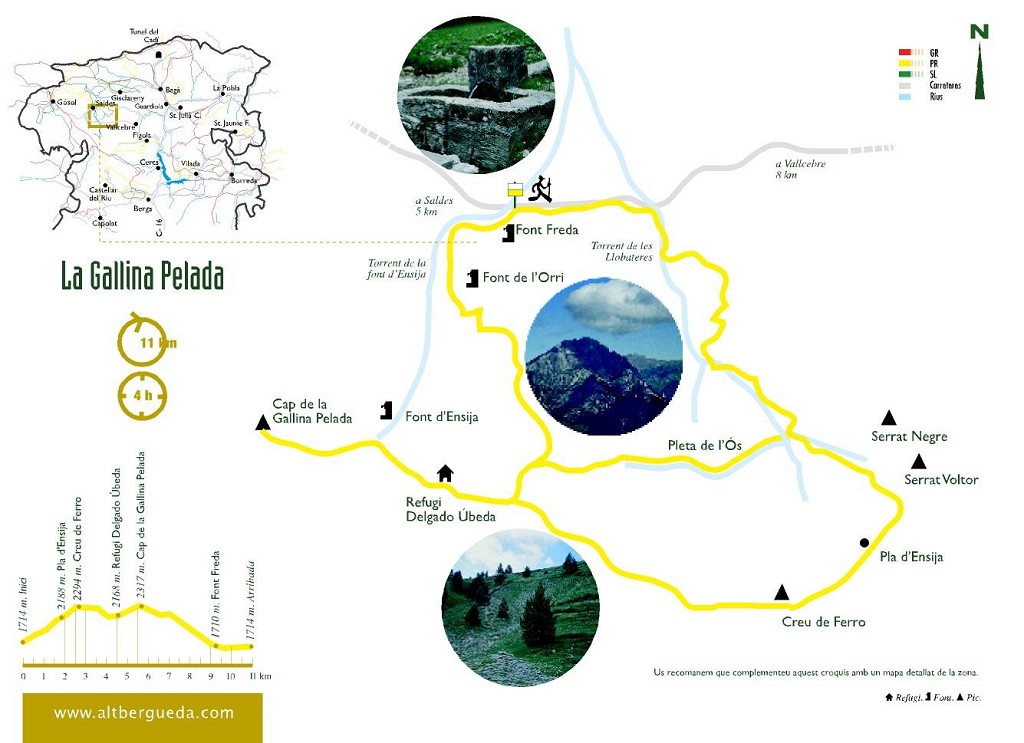 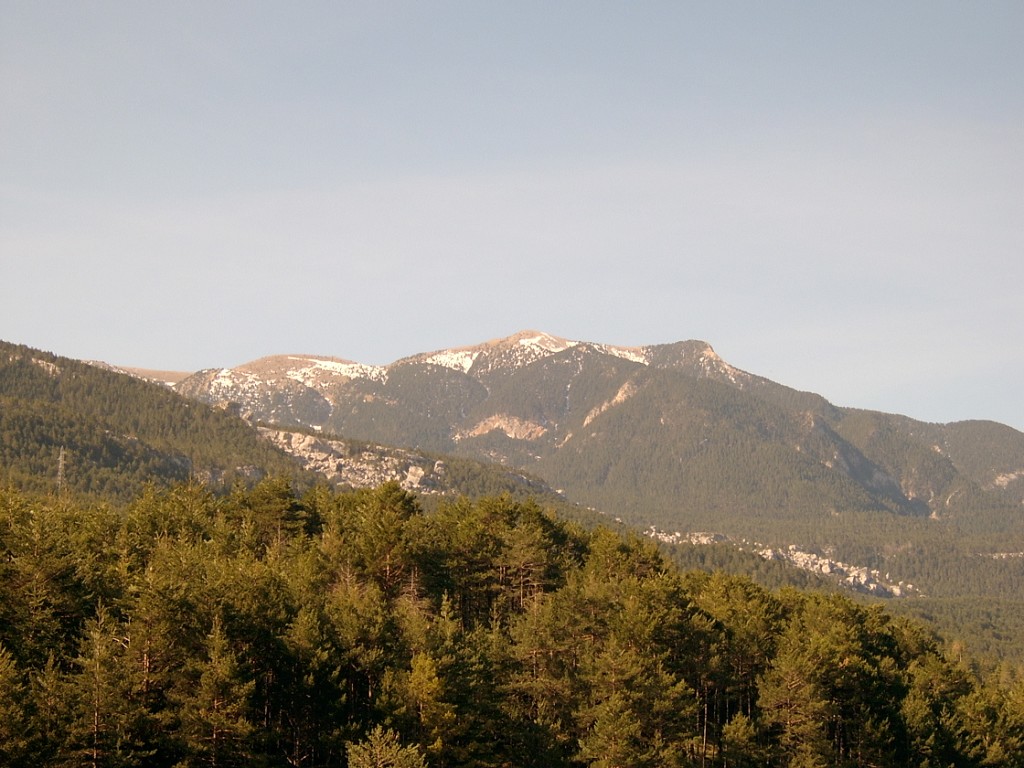 The Ensija range offers an exceptional viewpoint of the Alt Berguedà. From its highest peak, the Gallina Pelada, also known as the Cap Llitzet, you can enjoy spectacular views of the Pedraforca massif, of the Cadí range to the north and of Rasos de Peguera and Port del Comte to the south. On this occasion, we recommend you ascend by the northern slopes.

The route starts on the path from the Coll de la Trapa to Vallcebre, around a kilometre further on from the Pleta de la Vila, right at the Font Freda crossroads, on the right-hand side. You should leave your car in the car park, from where you access the spring and start walking.

Follow the track for a little over one kilometre. You then cross the Llobateres stream and right after doing so, you need to break off to the right to take a cleared forest track that follows the stream along its left-hand side. Before you take the track, you'll see a sign from the mining route that translates as: ‘Gallina Pelada via the Llobateres stream'. The track narrows as you move along it and forces you into the middle of the stream which you'll need to cross from side to side as best you can. The stream is normally dry so there is no problem crossing it. If there is any water coming down, you can avoid it by going along the banks where a path has been beaten out.

You will then reach a fork in the path: one runs off to the right through some scree and the other continues to follow the Llobateres stream to the left, not in the middle of the stream now but threading off bit by bit towards the north-east. From this point on the path is very well trodden and starts zigzagging to tackle the steep slope while passing through the woods.

You will then cross the Llobateres stream and start walking in a north-easterly direction. Continue zigzagging through the middle of the pine wood. From here, if you look towards the north, you will see Pedraforca and the village of Saldes at its feet.

Very soon you enter a dry stream bed; continue upwards, following the course of the stream towards the south-west. You will then reach a point where the stream gets slightly swampy but you need to carry on in it. After this point, the stream widens out and enters a little grassy valley where the trees are more widely spaced out.

The valley then closes off again and you will see that the stream forks off into three branches. If you follow the most right-hand one, it will lead you directly up to the Pla d'Ensija by means of the Ensija stream. On this occasion, we suggest you follow the left-hand branch which runs north-east, ending up at the most easterly end of the Ensija range, at the feet of Serrat Voltor. You'll need to carry on walking in the stream itself.

You come to another branching of the streams, and you need to continue following the left-hand one towards the north-east. Towards the end of the climb, the path alternates both in and out of the stream.

Finally, you reach the top of the crest. The views are spectacular in every direction. The hill on your left is the Serrat Voltor. You can climb it if you like, but the views are no better than the ones you already have. Your route continues to the right, in a westerly direction, along the crest of the Ensija range on its southern side until the end, where you will reach the summit of Gallina Pelada. You are now on a plain where the pines are sparser and grassy meadows predominate. Descend slightly and then go up again to the Creu de Ferro, at an altitude of 2,279 metres.

At this point there are some truly spectacular 360º views. The Cadí range, the Moixeró range, Andorra, Puigmal, Montseny, Montserrat, Port del Comte, Rasos de Peguera, the Lladres range, the Queralt range... You need to continue walking along the crest through meadows with alternating grassy and rocky areas, heading constantly in a north-westerly direction. You will descend slightly and then start climbing again. You cross the Llobateres dell and as you come to the end of this plain you will see that the crest forks: you need to take the right-hand branch towards the north. The path is very well marked by large milestones. At the end of this crest, on the right-hand side, you will see the path that comes straight from the Ensija stream, which you left earlier.

From here, you need to descend to the Delgado Úbeda lodge; first of all by means of the mountain and then crossing some flat ground before climbing up to the lodge.

To get to the summit of Gallina Pelada, you need to take the path that runs to the left of the lodge. You will cross over some rocks, gradually climbing upwards.

Before climbing up to the summit, you will cross a pass from which there are some lovely views of the Peguera valley, the Rasos de Peguera...

Finally, you reach the peak of Gallina Pelada, a look-out point with breathtaking views of the immediate surroundings: the villages of Saldes, Gósol, Maçaners... and more distant ones: Cadí-Moixeró, Montseny, Montserrat... Once you have written your impressions in the "summit book" and marvelled at the scenery, you can begin the return journey. Descending by the same path you came up to the lodge, you will cross the same plains you came by, but at the point where a gentle descent begins, you should turn towards the left, in a northerly direction. There is a metal post to help you find the start of the stream leading downhill. Your descent leads through grassy meadows. Right before you, in the distance, you can see Tosa and the Penyes Altes of Moixeró. Closer to you, there is a gentle hill which you skirt on the left-hand side. The path is increasingly better defined as it descends, and you can enjoy some lovely views of the southern side of Pedraforca, with the village of Saldes on its lower slopes. You will see another, more pointed, hill which you also skirt around the left of; to the side you will see a stream that runs more towards the left, while you should head to the right until you come to some level ground. Cross this land and then turn to the left to follow a well-marked path which will take you to the edge of the Font d'Ensija stream, passing through an increasingly luxuriant wood and zigzagging through the trees. This path is arduous and full of stones. You need to take care you don't slip and twist your ankle.

You will come across the Font Freda stream which you should follow on its right-hand side to the bottom of the valley. As you reach the bottom of the stream, the path gets increasingly better defined, gentler and more well-trodden, which makes walking much easier.

Finally, you reach the Font Freda spring, where there are tables and barbecue areas. From here, all you need to do is go down the steps which will take you to the end of the route.