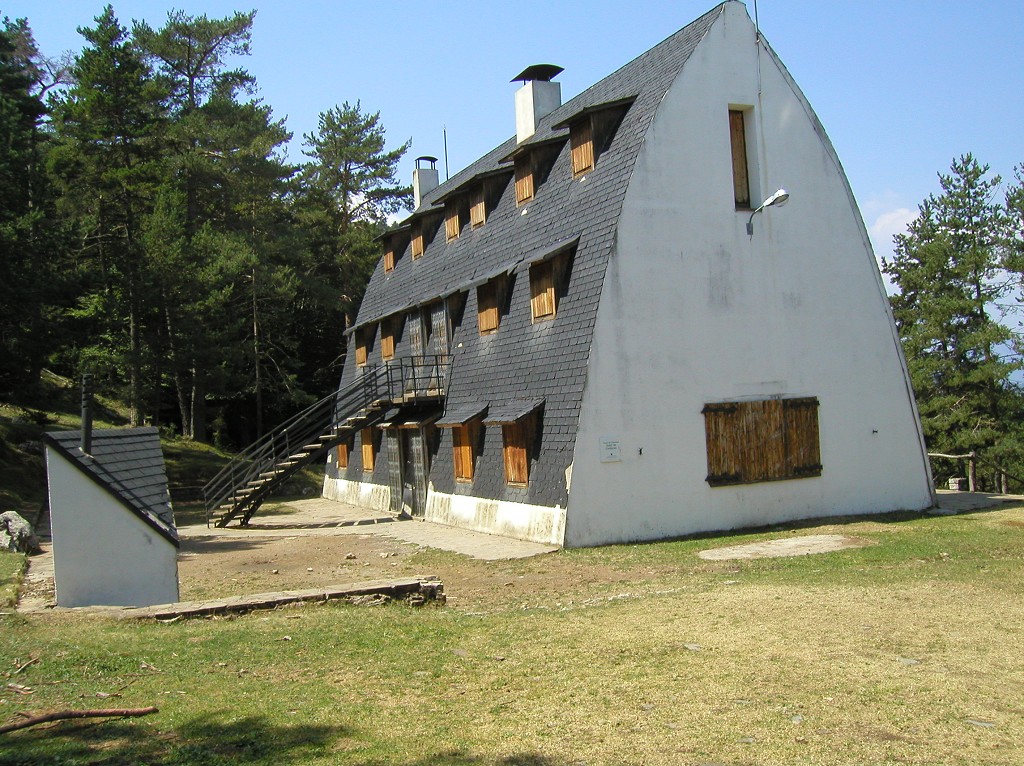 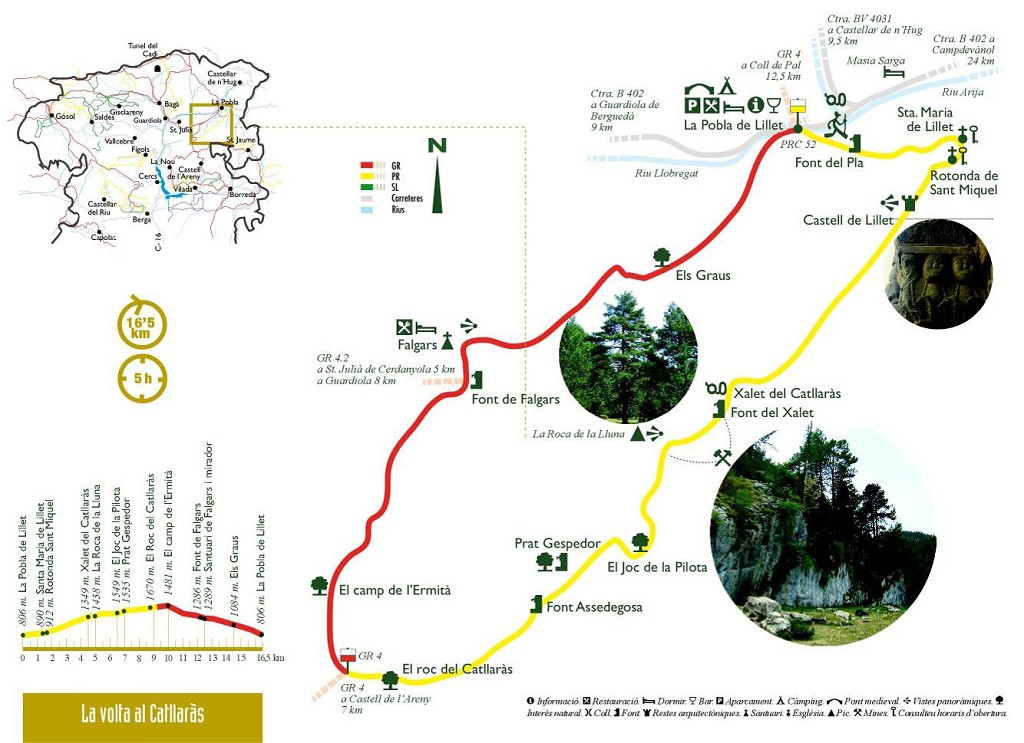 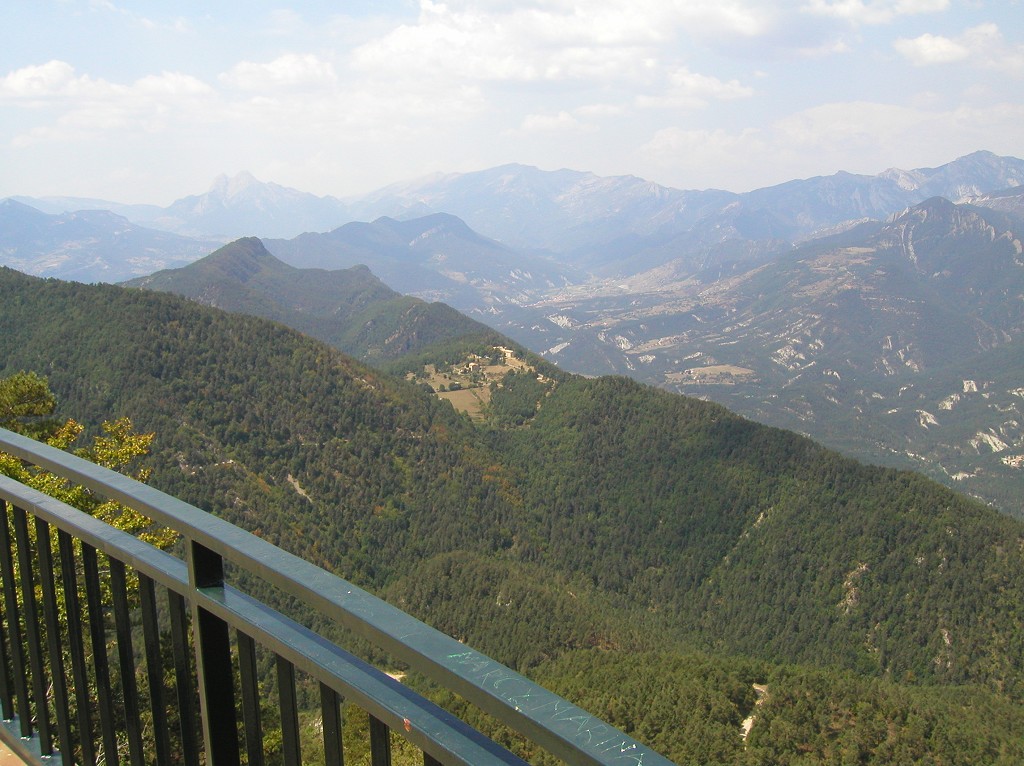 El Catllaràs is perhaps one of the lesser-known ranges in El Berguedà but it is also one of the most interesting. Four of the routes proposed in this section give several views of the southern side. This route takes you right into the northern side with an itinerary that combines a religious past, agricultural and livestock uses and mining exploitation in a setting of great natural beauty.

The PR starts at the Coromines quarter, in front of Sant Antoni chapel. This quarter is the set of houses you come to when you cross the river and consists of one main street with all the other streets crossing it. It was a workers neighbourhood created in the middle of the 18th century for those working in the incipient textile industry. It is important due to the fact that it is one of the first examples of urban planning in Catalonia.

The route begins by following the former high road from La Pobla to Ripoll that takes you to the monastery of Santa Maria de Lillet. The first references to this monastery date from the 9th century. The present-day ensemble is the result of several construction works from the 11th, 14th, and 18th centuries. It was burned down during the Civil War but has recently been restored and can now be visited. A little further up, you will come to the small Romanesque church of Sant Miquel. To see inside both buildings, ask for the keys at the Pobla de Lillet tourist office (Xesco Boix park, no number).

The sign-posted path starts going up to a cliff where you can see a cross and remains of walls. These are the remains of the old Pobla castle, built during the 10th century and probably abandoned in the 13th century. When you reach the pass below the castle, a small path goes up to the castle. The view from here is magnificent: it affords an excellent view of the Berguedà and Ripollès ranges, with La Pobla at your feet.

From here the path starts going up through beech and pine woods to reach the Catllaràs villa. This building was originally designed by Gaudí to house the engineer who oversaw the mines that extracted coal to feed the furnaces of the Clot del Moro cement factory. Unfortunately, the original design only remains in the form; the typical details of Gaudí architecture disappeared with the various remodelling works undertaken. It is presently occasionally used as a lodge. Later, on the right side, there is a spring.

The path now continues west and is very steep until the Fred pass and the Roca de la Lluna belvedere. However, we suggest the option of following a track that, though longer, has two advantages: the slope is smoother and you can visit one of the Arderiu mine entrances. Almost all the old mines have either disappeared or are very hard to reach. In this case, the mine is at the foot of the track. To get there, keep going up through the main track from the villa. At the first crossing, keep going up on the right; at the second crossing, Font d'Ardericó is indicated to the left. Keep on this track for about a hundred metres and you will see the mine entrance on the right. It was worked from 1908 to 1922. To reach the belvedere, return to the main track and keep going up.

The Roca de la Lluna belvedere was built by ICONA and affords magnificent views of the Pyrenean and pre-Pyrenean ranges, and also gives you a ragged profile of the Catllaràs ranges to the south. There are tables and benches and a spring where you can have a picnic.

If you keep on along the sign-posted path, you reach a terrace with a chimney and walls: this is the engine room, where the coal from several mines was collected before starting the complex journey to the road to La Pobla, where a new narrow gauge railway station has been built.

There is a moment when the route leaves the track and takes a small detour to go through the meadow called Joc de la Pilota. The name, the Ball Game, comes from the fact that it was used by the English engineers living at the villa to play ball games. It is also called the Damases meadow. Surrounded by woods and limestone rocks, this is a place where you can breathe in an atmosphere of great peacefulness. It is located halfway along the route and is an ideal place to have a rest and observe the simple beauty of nature.

You later come to the Gespador meadow, one of the characteristic meadows of the upper spheres of the mountain range. In summer there is usually a small herd of cows, a vestige of the large herds that once grazed in these meadows.

You soon reach a large rock set in the middle of a plain: this is the Catllaràs rock, one of the clear divisions between the northern and the southern faces. Towards the east you see the peaks that mark the central ridge, and towards the south the large meadows of the Orri plain.

After crossing a pass, the path now starts going downhill. After following a track (with the occasional shortcut) you reach a point where the path takes a 90º turn to the right. From here the yellow and white waymarks end and you have to start following the red and white waymarks of the GR 4. The path eventually runs into a track with a large plain on the right: this is the Ermita fields, once cultivated fields where you can still see the terraced land. This is a good spot to have a rest.

After walking a while, you reach the Falgars spring with tables. On your left, you will see the GR 4.2 that gives to Sant Julià de Cerdanyola, Guardiola de Berguedà, Bagà i coll de Pal. You continue to the Falgars sanctuary, wich you can see in front.. Though documented since the 10th century, the present building dates back to the 17th century with some Romanesque remains. There is a cave, Cova de la Troballa, where legend has it that a figure of the Virgin was found. This cave is a little far off the route. Apart from the church, there is a meals and accommodation service. There are also facilities for barbecues, which are usually quite popular, especially in summer, on weekends with good weather, and in mushroom season.

From here the path now descends towards La Pobla via the ridge. In this section you go through three passes or passages that skirt rockwalls along the path. It is quite interesting to see how the path skirts these obstacles. This path was of such importance that it was cobbled in some parts to facilitate preservation and you can still see the stones driven sideways into the ground, especially below the first and the last pass.

If you are looking for a quiet place, just before you get to La Pobla, go to the Ventaiola wood. You have to make a slight detour. The path goes down alongside fields and you can see the wood on the right. You will see a track on the right with a yellow cross. Go past this track and keep going down. You will come to a second track on the right, also with a yellow cross. Take this track and you will soon come to yellow points painted on the trunks. Follow these waymarks until you reach the Roure spring, a lovely spot with a spring and stone benches. If you descend via the ridge path, you come to a concrete road that takes you back to the last stretch of the GR, after passing the heliport.