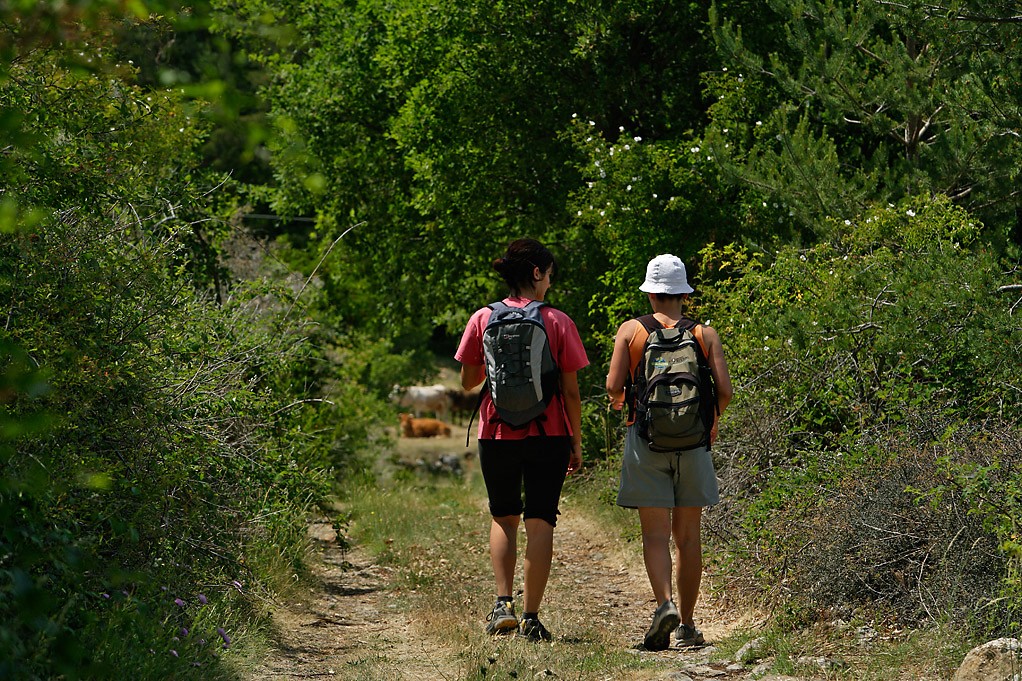 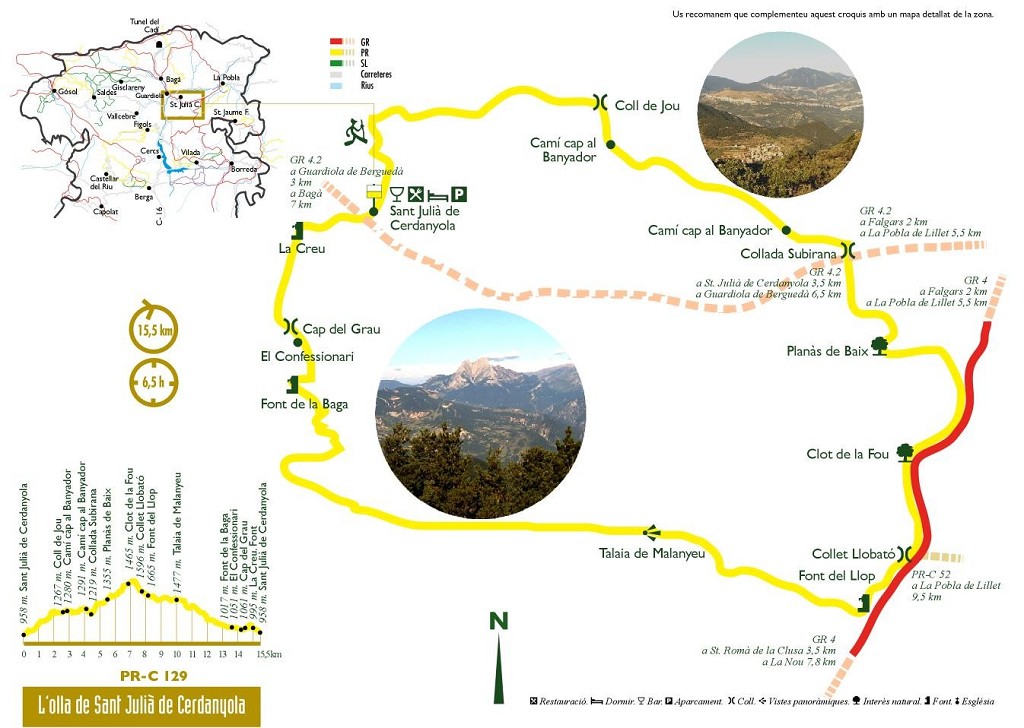 Sant Julià de Cerdanyola is a picturesque village at the end of a broad valley and overlooking Guardiola de Berguedà from an imposing drop. As you climb up the road, the views gradually broaden to take in some of the most impressive ranges of the area. However, when you start to draw close to the village, the first thing that strikes your attention is the endless rows of stone walls marking strip fields and behind, dense forest. These two elements, abandoned fields and woodland, as well as the long views, will accompany us along most of the route described here, which more or less follows the perimeter of the borough.

The route starts at the bridge at the entrance to the village, beside what used to be the mill (you can still see a millstone propped against the wall). But before you start walking, take the time to fill your water bottles at the Font del Castell, about 100 metres along the road to Falgars. The spring is in a shady corner with stone tables and mushroom-shaped stools … and the water is delicious!

After climbing a stony ridge, the path descends towards the stream bed. You will see that the bed was used to grow crops, with the typical walls and, at the base of the wall to the right, there is an opening through which the rainwater was channelled to prevent it from spoiling the crops.

On the other side, the path climbs the slope and the views start to open up. We pass beside abandoned fields, with some stone huts built into the walls. These fields were at one time vineyards, thanks to a decree passed in the mid-19th century which exempted uncultivated land from tax if they were used for winegrowing. The phylloxera epidemic at the end of the century meant the end of winegrowing in this region, the fields were turned over to other crops and eventually abandoned.

Once at the top, the route follows the ridge towards the Coll de Jou. The path passes through woodland, occasionally offering attractive views of the mountains Puigllançada and Tossa d’Alp to the north and the village and its broad valley to the south. At the Coll de Jou, the route crosses the track and climbs the ridge until it reaches a very pleasant path that runs through a beech wood towards the Artigassa. An “artiga” was an area away from the houses that was farmed for a few years and then left fallow for a few years more. Here again we see the walls of the abandoned fields.

From here, the path descends to the Coll de Subirana, crosses the road and climbs again through the forest to the Planàs de Baix, an extensive area of flatter land where again we see the remains of old fields, which today are invaded by the forest.

The route follows the edge of the flat area and finally comes to a crossroads in front of another area of long-abandoned fields, called Camp de l’Ermità. From here, the path rises steeply through the woods, coming out on a track at the Collet Llobató. From here you can see the village of Sant Julià far below and, behind, Pedraforca and the Cadí range. It is a good place to stop and absorb the view. On the left, you can see a path with the yellow and white markings of a short-distance path which would take you to the village of La Pobla de Lillet along the top of the Catllaràs range.

Our route leaves the track to head for the spring called Font del Llop, just below the Collada de Sant Miquel and the imposing Roc de la Clusa. The spring can run dry after periods of drought. If you want to rest, why not go up to the grass slopes on Collada de Sant Miquel. Although the views are blocked by the trees, it is a pleasant, peaceful place to restore your energy.

The marked path starts to descend under the rock walls of the Roc de la Clusa. When you reach a more level area, you will turn to the left towards a broad ridge that separates the valleys of Malanyeu and Sant Julià de Cerdanyola. The clearings in the trees provide views to the north and south, with the valley floors far below us. The path becomes a logging track that arrives at a broad pass and then turns to the right. Our path continues along the ridge, which becomes increasingly narrower and more exposed. Pay attention to the marks as the route picks its way, alternating between the north or south faces or even along the top of the ridge. It’s worthwhile stopping at the more secure points and enjoying the views; they are truly impressive.

Finally, the route links with the path coming from Malanyeu (called the Mal Pas) and descends steeply to the right. At some points, you will see small levelled, semicircular areas, with blackened earth and charcoal fragments. They are the remains of old emplacements used to make charcoal. Further below, you will see again the walls of fields abandoned many years ago.

The route joins the track that comes down from the Collada de les Bassotes. A little further on, the route turns left down another track. Both this track and the track that continues ahead to be an old narrow-gauge railway, with wagons pulled by animals, built in the 20’s to bring down tree trunks. It starts below the house called Cap d’en Pla (you can still see the stables where the animals were kept) and slopes gradually downwards to a cable railway above the Collet, near the Guardiola tunnel. From there, the wood was taken by train to the coalmines further down the valley. At present, almost its entire length is a track. As you descend, you will see more abandoned fields, now converted into woodland. The track ends and becomes a path that passes beside the spring called Font de la Baga.

The path crosses the valley floor and starts to climb the other side. When you are almost at the top, you will see a curiously shaped rock called the Confessionari. At the top, you will hear running water and the path descends beside a canal that takes the water from a spring to the village, where it is divided into a complex network of irrigation channels that take the water to all the vegetable gardens surrounding the village. As you descend, you will see part of this network. The route reaches the cross that marks the entrance to the village and follows its streets to the starting point.

This route is quite long and demanding, with a total ascent (with all the ups and downs) of slightly more than 1,000 metres. If you become tired, there are several points where you can shorten the route and return to the village: 1) At the Coll de Jou, descending along the track or, slightly above on the ridge, along the old path (marked with blue paint); 2) At the Coll de Subirana, coming back along the road; 3) At the Planàs de Baix, descending to the right along the track until you reach the road to Falgars; 4) And at the Camp de l’Ermità, descending to the right along a zigzagging track, again until you reach the road to Falgars.