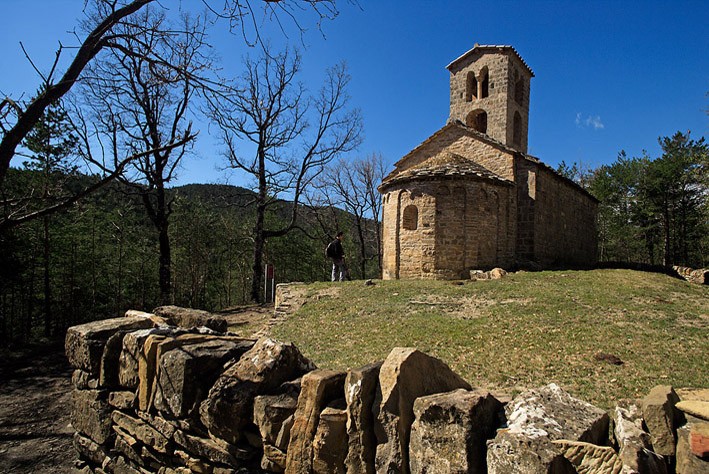 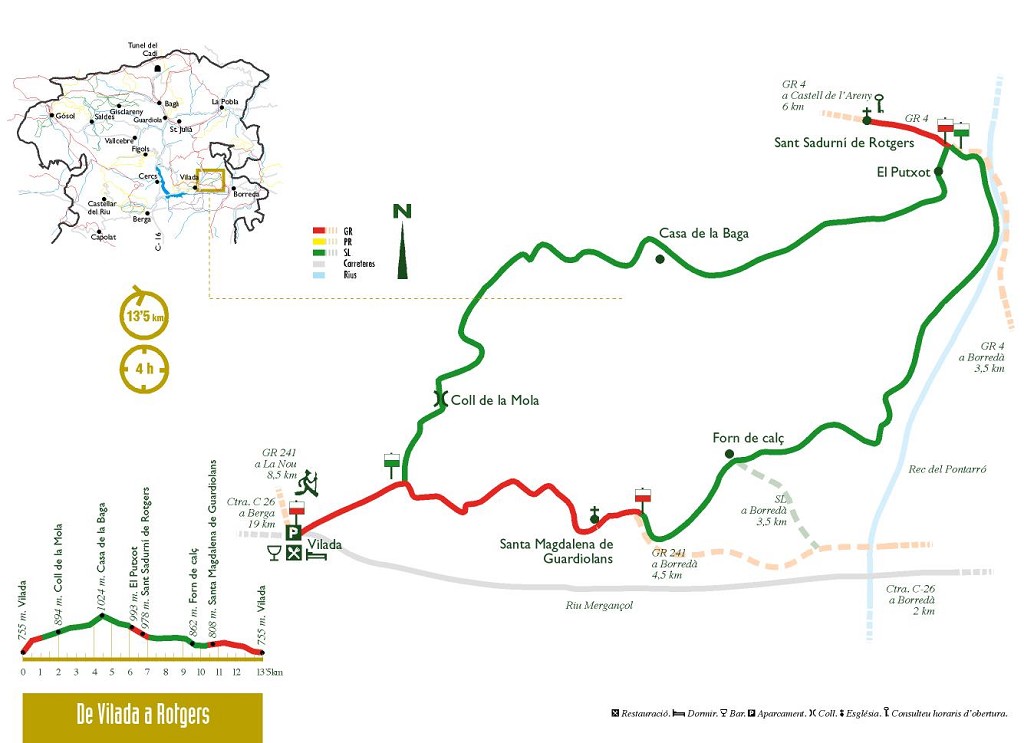 The beginning of this route is the bridge at Vilada, following the waymarks of the GR 241 along a track until the first pass. From here, turn left and follow the green and white waymarks along a local path. At a specific point, the route takes a shortcut around a bend in the track, just before emerging again onto the track, you will see three stones painted red: these are markings to delimit the boundaries of the farms. The central stone is always the largest, it is the boundary point and marks the exact limitation point; the small ones are called filloles. The orientation of the stones indicates the direction the limit follows. The stones can also be painted in other colours (yellow, white, etc.) or, if the terrain is very rocky and stones cannot be driven in, the limits are marked with three lines cut into a rock. If you are used to hiking around the county, you will often see these waymarks.

Just before reaching the house at the Mola pass, the route leaves the track and goes uphill along the slope to the path that led to the Baga house. As you climb up the ridge, you will see the walls of old fields; you can imagine the work involved in building these terraces — one year of work per hectare — and then cultivating them. The woody areas were evidently much smaller.

When the path levels out, you have an opportunity to enjoy the excellent views of the Vilada mountains and Castell de L'Areny in the clearings. The path leads to a track with clear signs of active forest exploitation. Although the route veers away from the Baga house, it's worth going there to see a typical farmhouse, probably built in the 18th century, which has a special feature: it has its back to the valley and faces towards the side of the mountain. To the modern mind, this seems unusual as it was deprived of the best view; but of course in those days the most important thing was not a nice view but orientation towards the sun.

When you return to the path, you come to the fields of the Putxot house. There is a small cistern and you can see the remains of the house on a small hill. This is a peaceful place to rest and enjoy the landscape. Towards the south west you will see the Baga place, where you came from. Very soon, the route links with the main track that goes to Sant Sadurní de Rotgers.

The church is on the left of the path. Near here — about 700 metres to the right — is the Cirera spring which provided water to the Cirera house, which has now disappeared.

After being restored, the Romanesque church of Sant Sadurní de Rotgers (11th and 12th centuries) became part of the County Council's network of monuments that are open to visitors. For 2 € (1.35 € for children and pensioners), you will be given very comprehensive information on the history and building of the church. Highly recommendable. Consult opening times.

Following the ridge behind the church, in a couple of minutes you reach the remains of walls built right alongside a rock wall. These are the remains of one or two mediaeval houses of the same era as the church. Here we would envision houses with one or two rooms and a roof with a single slope.

From here you return via the same GR you came up on until you reach a stream where the GR continues on the left along a trail; you should continue along the track on the right following the green and white waymarks. After one kilometre, the route goes off to the right along another track to the Capdevila house, and again goes down the right along another track before reaching the house. It then becomes a path and goes past an old crop field area and the remains of a cabin. It emerges onto a ridge and starts to go down towards the left. To the left you will see another path with a green and white cross painted on a tree. This well-timbered path conceals a surprise: when you follow the path you cross right through the stream, almost at the same level, and on the other side you can see some unusual structures: they are old lime kilns used to burned the stone for converting into lime. Be careful here, the kilns are in ruins and the terrain conceals holes.

Returning to the route, the path goes downhill until it comes out on to a track. You should turn right to get back to the GR and follow it until you return to the first pass that you left to go to the Mola pass. The most interesting aspect of this section is the church of Santa Maria de Guardiolans, which is clearly quite old. The path goes between the church and the Solà house, an old farmhouse converted into farmhouse residence. The church is documented from the 10th century and has Romanesque traits but underwent major renovations during the