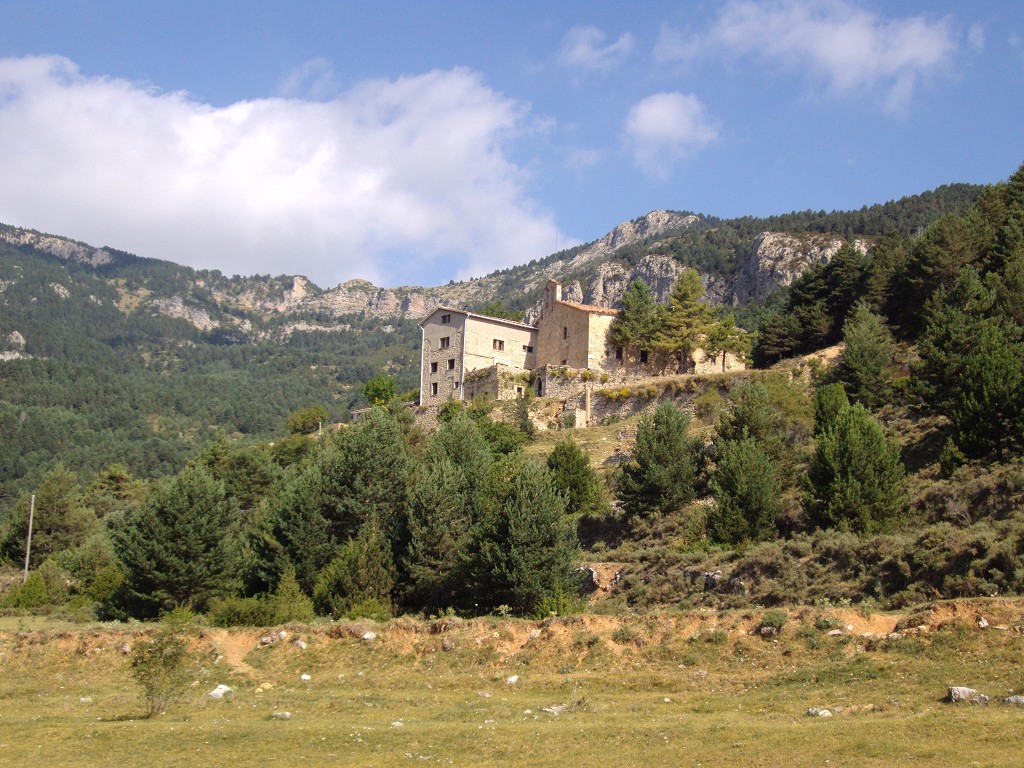 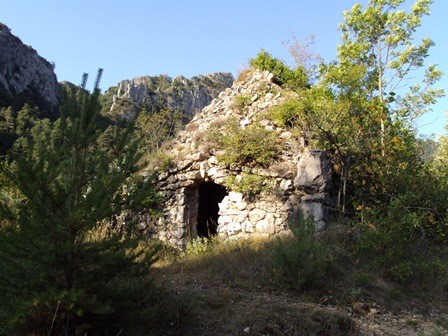 The Figuerassa mountain range is one of the most spectacular viewpoints in Berguedà. With this excursion the proposal is to turn around the base of this mountain range, following old paths. However, if you feel like it, from the Coll de l'Oreller you can access the summit of the mountain range and enjoy one of the best panoramic views that this region has to offer.

Description
The route starts at the pass of Santa Magdalena de Berga (in the car park of La Cabana restaurant). From here follow the asphalted track that goes towards the castle of Sant Ferran, which will border on the northern part. Medieval castle, documented from the s. XI at the hands of the counts of Cerdanya. With the Carlist Wars it was constituted as a strong military square and was completely rebuilt. During the years after 1940, it wanted to become, with very little fortune, a residential and hotel nucleus, which undermined its appearance. At the moment it includes several houses inside and the Friends of the Castle of Berga besides several guided visits throughout the year, each summer they carry out archeology workshops.

Just before the entrance, take the path on the right that will lead you to the paved road known as the Drecera de Queralt. At this point is the Oratory of Queralt - a peculiar chapel now for private use with a garage door and in a rather precarious state. And below it is an open field with the remains of a building. This is all that remains of Cal Patata, a major textile factory that was burned during the Civil War, with its retirement in 1939.There are documents since 1632 that speak of the existence of a wooden sawmill before construction. from the factory.

You continue to climb the narrow road, following the yellow markings and passing a series of buildings that turned the water of the doctor's stream into work; small precursors of the subsequent industrialization of the Llobregat. The next building you will find is the old Franquesa factory. Currently half-abandoned homes. It was a textile factory from 1881 until its abandonment as an industry during the Civil War. A little further up, you will see a kind of bridge that was the aqueduct and the waterfall for the Lluís Nè factory. The empty lot to the right of the road is part of the factory site, though in its day it was a much larger building that reached beyond the aqueduct. Below is the dam of the Franquesa factory. This factory, which was built in the second half of the 19th century, functioned as a textile factory until it was also burned during the Civil War. It was finally demolished in 1986 due to a sinking danger. The current parking lot of the Cal Nen restaurant occupies the site of the old factory pond.

You will soon see the old Garrigà factory, an imposing, half-ruined building on the other side of the stream. It was built at the end of the 19th century as a textile factory and burned like so many other industries in 1939, but it was restored and continued to operate until 1950. The house below is the Baró mill, now a dwelling but formerly a flour mill. which has been mentioned since 1791.

The hermitage of Sant Marc just in front of the restaurant and a hundred meters ahead, there is a path on the right that leads to some ruins, it is the Guix mill whose water can still be seen. He was left inactive with the construction of El Garrigà, as the factory built a new canal that left it without water. It was a cement and gypsum mill.

You will come to the Queralt road which you must cross and follow the path for hikers arranged by the side of the road, upstream. You will still pass the last building of the stream that was the mill of the Bofarull, today Hostal del Guiu. From the end of the 19th century, it worked as a cement mill and small power station, until it was refurbished as a guest house in 1949. From the road you can now see the canal and the dam.

From here the landscape will be the protagonist. Climb a few meters along the path on the left and then at the fork continue down to the fountain of Mossèn Guiu. Follow the road to the Font Negra, with a cozy well-equipped picnic area. After the second parking area, cross the road to take a road that goes to the right. Then also on the right, you will find a very interesting and well preserved dry stone construction. It seems to be related to a stone mine and a couple of lime kilns that existed in this place in the early 20th century. The style is reminiscent of the modernist style of this era, but to a very small extent. The interior shape of the roof stands out. Keep going uphill and you will soon have to cross the road that leads to Rasos de Peguera to start showing signs of an old horseshoe road that will become more and more evident, especially when you cross the road for the last time - you have to cross it. four times in total. From this point, the path goes through a pine forest, now clearer, now thicker, until you find a fork that will allow you to reach directly to the Coll de l'Oreller following the path on the right, but the proposal is Continue straight on until you reach the Corbera plains, where you will see the Corbera Sanctuary just above. Apparently already at the end of the medieval age there must have been a church, Sant Vicenç de Corbera, which used to occupy the place where the shrine of Corbera stands today, or at least in a very close place. The architectural complex consists of the church, the rectory house and the old lodging. The current construction dates from the last quarter of the 17th century, with some subsequent adjustments, from the 18th century.

From the plains, follow the track that goes east of the plains, passing the Corbera spring. Shortly after the fountain you will come to a track that you must follow to the right. If you wish before you can access the Sanctuary by ascending the paved climber on the left. In a short while enjoying the good views of the road, you will be at the Coll de l'Oreller. From this pass, if you follow the path on the right marked PR-C 73, you can access the Figuerassa mountain range. From the two viewpoints on the top, the views are spectacular. If you have the time and you have the strength to get there, the views are worth it. It means extending the route by half an hour.

From the pass to follow the route you have to continue along the track that goes north and that if you continue, it will take you to the Estany and the beech forest of the Baga of the nine commas; but the proposal is soon to leave it to take a path on the right in the forest and marked as a variant of the Camí dels Bons Homes (GR 107.5). About 500 m further down, you must also leave this path that will take you to the Casanova de les Garrigues, and follow the path to the right that will soon take you to the picnic area of ​​Plana Rodona.

Just after passing the barbecues in this recreational area, continue along the path on the left until you find the track that you will have to follow sections, but you can shorten some shortcuts until you reach the area of ​​the Collada Alta. Here if you still have time and energy, you can climb the path on the left that goes up to the ruins of the castle of Blancafort, where you can enjoy another good panoramic view, this one facing more to the east.
Returning to the high pass, keep going down the main track for a few meters, but soon you will leave it to follow the old horseshoe road on the left that will take you to the tarmac road near the house of Vilaformiu. Once here, continue down until you find the old road from Cercs to Berga, where you will again find white and red marks, now on the Camí del Llobregat (GR 270). Follow it a few meters to the right, to the south and then you will be on the road to Vilada i Ripoll. If you look below it there was the Cal Parraquer bridge on the royal road that crossed the Metge stream (the same one you followed at the beginning of the route) and it allowed you to access Berga, but you would need a restoration. that at the moment does not arrive. So follow carefully along the sidewalk to Berga. When you cross the stream of Metge pay attention now, there are the remains of what was the last bridge of the Tram de Sang and Cal Curriu final station of this first mining train in Berguedà connecting Berga and the mines of Fígols (currently partially recovered as a hiking route). You are again at the pass of Santa Magdalena, the end of the route.