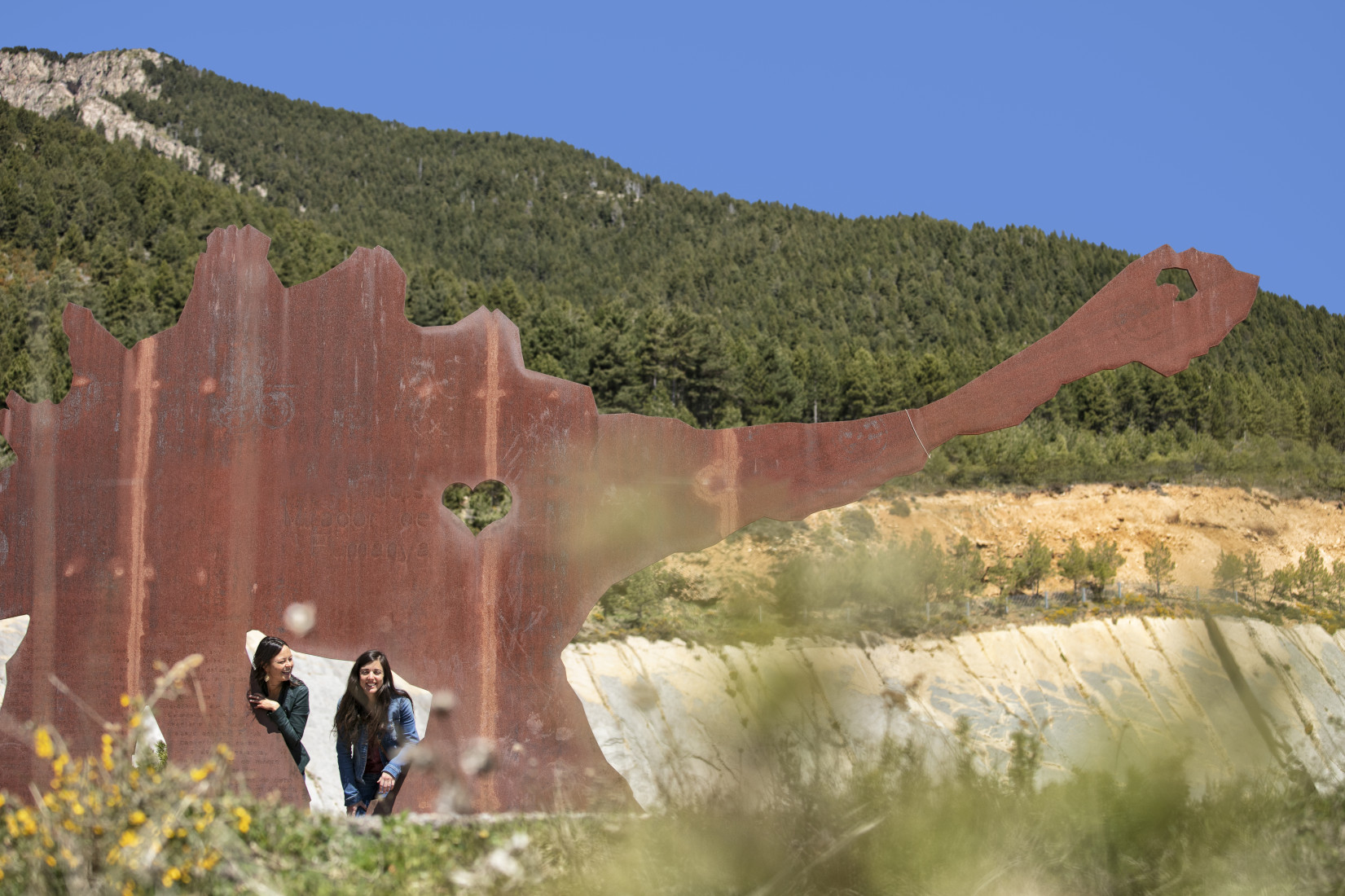 Sant Corneli Mining Colony was built once by engineer J.E. de Olano managed to start the mining operation of the Fígols basin, and was the company Carbons de Berga S.A. Between 1895 and 1911 a good part of the Mining Colony was built, as well as the neighbors of the Consolació and Sant Josep. The Cercs Mine Museum is currently located in this colony, which tells the story of the mining operation that closed its doors in 1990.

To the north, just at the foot of the Ensija mountain is the Fumanya area, where open-cast mines exposed one of the most important paleontological dinosaur areas in the Upper Cretaceous of the Iberian Peninsula.

Two places linking this route, which in turn offers you splendid views in the Llobregat valley, from the cliff of Vallcebre, a long cliff full of degrees to access on foot.

Description
The route starts in front of the Cercs Mines Museum and heads south along the Llobregat trail (GR 270). The track soon ceases to be paved as it heads west towards Fígols. You will pass by some potholes and the houses of the Quer and Cal Gorra, and on the next turning you have to leave the GR and follow from here the PR-C 73 markings along the track to the right that will now rise. brave to Cal Calderer. When you reach the paved track, follow it to the left until the charming nucleus of Fígols, currently one of the least populated municipalities in Catalonia; few inhabitants and lots of land. Notable is the Romanesque church of Santa Cecília (XI - XII).

Once you have a drink at the fountain in the village, continue along the road that goes north to the recreation area behind the town hall. You will leave immediately on the Peguera road, which you will follow a few meters to the left to take the track on the right that will take you to the now uninhabited house of Cal Petit. Continue on the main track and cross the road again to continue on the track. You will pass near the Casanova and Cal Barraquer. Shortly after the second, you will find a crossroads. The PR continues on the left but you have to climb the old Fumanya road, following the yellow markings on the Berguedà road network. Cross the road again and continue towards the Romanesque house and chapel of Sant Mateu de Fumanya. The path does not go right through the chapel where you can approach always respecting the properties.

Follow the track to a crossroads. The one on the right is where you will continue to return to the beginning of the route, but before you can not miss the visit to the paleontological site of Fumanya. Continue straight until you find the tarmac track that you have to follow about 300 m to the left and you will see the large dinosaur that presides over the Fumanya Dinosaur Interpretation Center. It's directly opposite the large wall, where up to 2,000 dinosaur footprints can be seen. It is the largest deposit in the area with 15,000 m2. Have fun, think you are in a unique place!

After returning to the junction, take the road to Vallcebre. You will pass by a reservoir and the house of Cal Gat. Behind this is the path that climbs the cliff to Cal Gat. Once up, continue along the path that runs along the cliff in the thick forest, you will know immediately why they are called the Boixader, the boxwood colonizes everything. You will reach the grade of La Mola, which if you go down, will take you directly to Fígols, but the proposal is to continue along the cliff, leaving a path on the right that will lead you to Vallcebre passing through the hermitage of Santa Magdalena. After the grade of the tailor, the path will tend to open and let you see more and more the panoramic view of the one of the Llobregat valley with the mountain range of the Catllassos on the other side of river. You will soon find yourself stepping on the rock and giving yourself a feeling of being on the cliff. Once past the Canaleta grade, you will find a track that comes to you from the left. Follow it to the right a few meters to the degree of the Boits where you will descend. An open path will take you back to a track. Follow it a few meters to a new crossroads, always continue south again marked with yellow marks, towards Sant Corneli. The track will soon be transformed into a path.

Cross the Peguera road for the last time, pay attention to the marks as there are multiple paths. You will come after the first houses of the colony, in front of you the church of Sant Corneli, built around 1905.Pass ahead and the down streets will take you to the Museum of the Mines.